I don't think "mechanica" is an actual Spanish word. Anyway:

Maggie the Mechanic
By Jaime Hernandez Well, after reading both this and Heartbreak Soup, I think I fall on Gilbert's side of the fence when it comes to deciding between the Hernandez brothers. But that's not to say that I dislike Jaime in the slightest; this volume is excellent, but I think Gilbert's Palomar stories showed more maturity and better storytelling, at least when comparing the first volumes. But enough about Gilbert; I've droned on enough about him already. Tonight is Jaime's show.

It's hard to know where to start with this volume. Maggie and Hopey (and other hangers-on) are long-running characters whose adventures Jaime has been chronicling for the last 25 years or so, but the start is kind of weird. For one, it's full of fantastical sci-fi trappings like superheroes, powerful and eccentric millionaires, dinosaurs, airships, and other crazy details. This stuff can be fun, but the best parts are the small, quiet (or sometimes loud) moments dealing with the characters' relationships. I liked seeing Maggie and Hopey goof off and worry about paying their rent, or Penny Century bugging her rich sugar daddy, H.R. Costigan. Maggie worrying about her appearance when spending time with her boss, the famous mechanic Rand Race. Izzy acting strange, subtly giving hints about her messed-up past. These low-key scenes are where Jaime's writing shines, and from what I understand (and plan to read in future volumes), he eventually phased out most of the fantastical stuff to focus on this sort of material.

That's not to say I didn't enjoy the sci-fi stuff. I especially liked the story in which Maggie tells about how she briefly became the sidekick to the hero Ultimax after accidentally releasing the Kirby-esque villain Maniakk into our dimension. 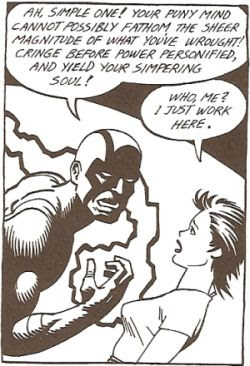 And I love the old school, pulp idea of the mechanic as famous celebrity, and some of the adventures that result from Maggie's globe-hopping travels with Rand Race are pretty damn enjoyable. 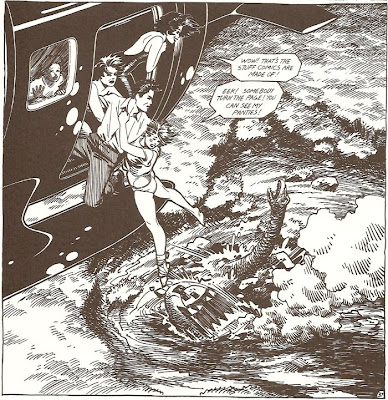 Also, I don't know if the women's wrestling scenes qualify as fantastical (especially since I believe Jaime still continues to write stories about the subject), but I really liked the character of Rena Titañon, the former champ and sometimes superhero. Her in-story fame is quite believable; she's strong, forceful, competent, and in control at all times, it seems. I hope she makes more appearances in future volumes. 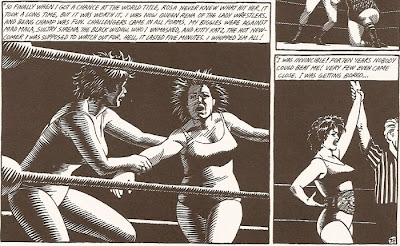 And the art! I've often heard that Jaime is possibly the foremost renderer of beautiful women, but I never understood that until reading this volume. He draws women with realistic anatomy, and a variety of body types, with seemingly effortless skill. Here's some examples:

That's Maggie in an early story, looking the part of the rugged adventurer. Here's another image of Maggie:

That one blows me away, the way Jaime portrays the little details so effortlessly. In just a few lines, he perfectly renders the folds of her shirt. Really, he makes it look easy. Then we've got the sexy and carefree Penny Century: 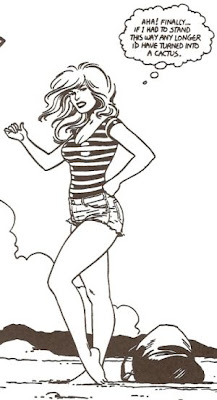 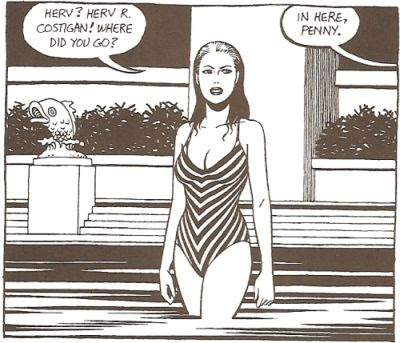 She looks damn good in the latter picture, even with her ugly skunk hairdo. Or maybe it's more like the X-Men's Rogue? Here's another really nice picture of Maggie: 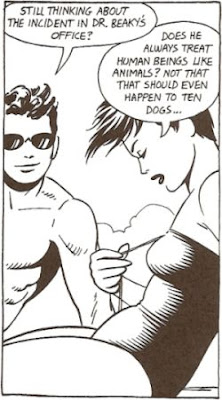 That one shows Jaime's exceptional grasp of female anatomy. Unlike some of today's popular artists (coughMichaelTurnercough), he's aware of the existence of fat and internal organs, yet he still makes his women look sexy. I especially like the way, later in the volume, he shows the change in Maggie's body type, but we still recognize her instantly. She's always been different from the more diminutive Hopey: 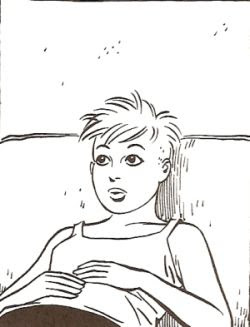 But after she quits her mechanic job, she begins to gain weight: 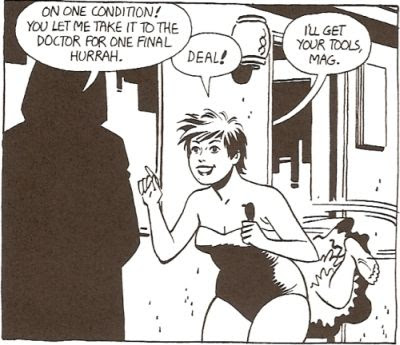 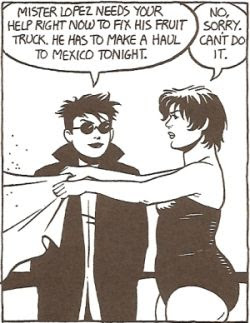 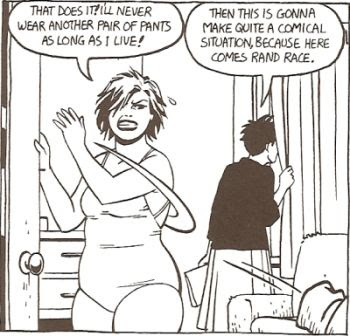 You can see over those three images how her body has changed over time, but it has changed realistically. Her face is a bit rounder, and the fat has accumulated around her hips and thighs. She's still pretty appealing though, if you ask me.

Okay, I've probably gone on about the female body too long; if my wife reads this, she might be perturbed. But it was what was on my mind. This volume seems to focus mostly on Maggie (as befits the title), although Hopey gets a little more "page time" near the end (as does Izzy; I think she'll get even more material later). I might be mistaken, but I think Hopey starts to edge Maggie out as the main character later. Or they could share the spotlight fairly equally. I'll find out whenever I read future volumes; I can't wait!
-----

I've got one more book that I want to talk about, but I don't expect to get to it tomorrow. But I might do a thing about one or two of the movies I've watched recently. We'll see.
Posted by Unknown at 8:05 PM