I'm talking about both the girl and the book itself there. But I'm getting ahead of myself: 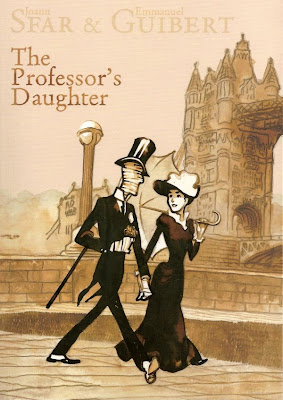 As I hinted there, this is one really gorgeous book, with beautiful watercolored art by Guibert. Apparently Sfar and Guibert have worked together regularly, but while I've read a few of Sfar's books, I haven't read any of their other collaborations. This one's good enough that I might have to seek out some of their other books (although Sardine seems like it might be a bit kiddie for me).

I'm getting to like Sfar quite a bit, especially his sprawling, anything-can-happen stories. This one's about a mummy named Imhotep IV, his love of the titular young lady, and the various adventures they have around Victorian London. It's all very enjoyable, and quite funny in places. And there's that feeling that you never know what Sfar is going to throw at you next. Psychedelic dream sequences? Murder investigations? Prison breakouts? Kidnapping of royalty? It's all in there, and more. Plus, the main characters are well defined in a fairly short amount of time, and their relationship is really pretty sweet. I especially liked Imhotep's issues with his father (Imhotep III, also a mummy), and the way he kept having visions of his children, who wonder what happened to their mother.

And as I mentioned, the art is beautiful. Check out this panel of Lillian, the daughter in question: 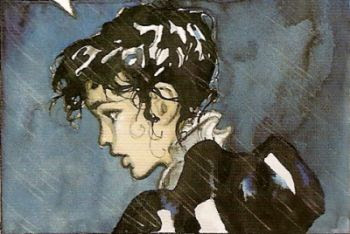 (I cut off the word balloon there to avoid spoiling a plot point). That's just an incredible picture; I love the strands of her hair dangling onto her face in the rain. I also like the physicality of Guibert's characters, and the comedy that he derives from it: 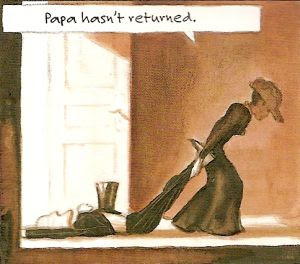 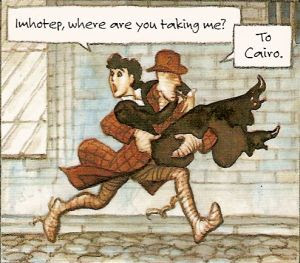 Good stuff. To tell the truth, while I'm okay with Sfar's art on his other books, I would really prefer if he just had Guibert do his illustrations; the guy is incredible.

If I have one complaint about the book, it's the length. It's really pretty short, especially for the price ($16.95, although I got it for less than that on Amazon), with only about 60 pages of comics, plus 14 pages of sketches and other illustrations. That's probably the length of a regular European album, but I would really like to have more. I don't know if there are any other stories about these characters, but the book does tie in with various other Sfar books, like Vampire Loves and the Professor Bell stories (are any of those available in the United States?). So keep the length in mind if you're going to buy the book.

But overall it's a fine comic, and I heartily recommend it, especially for those who like a splash of romance in their wacky adventure stories.
Posted by Unknown at 9:12 PM