See what I did there, taking the popular song lyric and switching the word? Okay, that didn't need to be explained. Anyway, a comic: 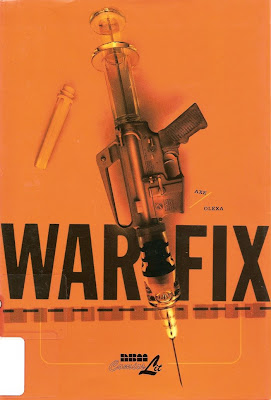 I had never even heard of this comic (or graphic novel, if you prefer) until I saw it on the shelf at the library. I picked it up because it looked interesting, and whaddya know, it is! It's published by NBM, and you can find it at Amazon, if you so desire. The main character is a journalist who shares writer David Axe's name, and he's fascinated with war. In the opening pages of the book, we see him as a kid in January of 1991, staring the the TV coverage of the first Gulf War. Cut to 12 years later, and as an adult he's seemingly still in the same position, watching the coverage of the current war in Iraq. He longs to experience a war zone firsthand and decides to go as far as paying his own way to Iraq so he can cover the war for his local newspaper. We follow him on his journey as he wonders whether it will live up to his expectations. 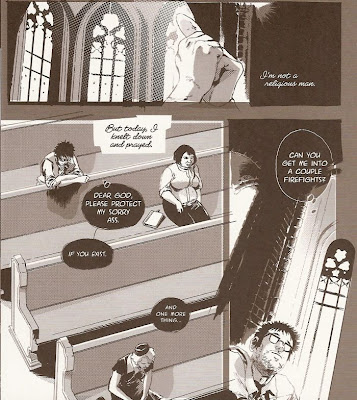 To me, this book seemed like a companion piece to Rick Veitch's current Vertigo series, Army@Love. In that series, Veitch posits a near-future in which the war is sold to young Americans "X-treme"-style, a chance to get an adrenaline rush. In War Fix, Axe shows that that's kind of already the case. In fact (Warning: political tangent ahead), I'm reminded of something my wife said when President Bush was trying to make the case to invade Iraq. It seemed like few people in the news media were speaking up against him, and she said that the reason for that is because war is good business for them. Whether or not reporters or commentators agreed with the war, it creates great television that keeps viewers glued to their sets. The administration seemed to try to capitalize on this with their (over)use of the phrase "shock and awe", and the "embedded" reporters delivered first-person views of combat. It was intense, and while I remember being sickened over the whole thing, I can understand the feeling of wanting to experience something like that firsthand. It's certainly been sold to us in movies and video games, with war seeming like a cool, heroic experience.

So, while Axe doesn't come out and condemn the country for its views on the Iraq war (or war in general), he kind of implicitly criticizes this attitude of acceptance. There's an interesting character that David meets in Iraq, a journalist who has been covering wars around the world for 20 years. He is later diagnosed by a psychologist as being addicted to the adrenaline rush of combat zones, which can be seen as a criticism of the United States's addiction to war (or even just violence; witness the recent Virginia Tech situation). At the end of the book, David seems to give up his fixation after being shocked by a particularly nasty bit of violence, but after he returns home, he confesses to his brother that he's planning to go back. It seems he's got the bug, and like the rest of the country, he's hooked.

On the art side, Steven Olexa's figure drawings remind me of Jonathan Hickman's photoreferenced art in The Nightly News, but his layouts are much more complicated, and sometimes hard to follow. The "panels" (I don't know if that term really applies when there aren't any borders or boundaries to separate them) often overlap each other messily, and the dialogue doesn't exactly lead the eye across the page very well. Here's an example: 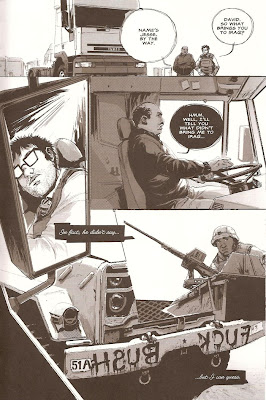 It could be argued that this is an effective way to convey the chaos of war, but I wouldn't go that far. It still looks very nice, and it's readable; it just takes more effort than readers might be used to.

So, it's an interesting look at the war, one that we don't see very often in comics. I recommend it to anybody that's interested in this sort of thing, and maybe to comics "scholars" who can analyze the craft of the artwork better than I can.
-----

Sorry if that got too political for anybody. I've got another one that I hope to get to tonight that can act as a palate-cleanser. And then a special event, maybe! Stay tuned to see what I'm talking about!
Posted by Unknown at 6:38 PM