Art What I Like: One Piece Is Awesome, Example #6

The ninth volume of Eiichiro Oda's One Piece contained a devastatingly effective emotional moment, one that took an entire volume to build as we learned about the past of Nami, one of the series' main characters who apparently betrayed her friends and sided with some heinous villains, but, as we learned, she had good reasons for doing so, and when forces beyond her control destroyed years of her life and left her helpless, the way her friends still stepped up to stand behind her was incredibly moving. I would discuss it more, but instead I'll refer you to this post by David Brothers from a few years back, since it was one of the essays that got me interested in trying out the manga.

Instead, I'll just point out this short bit from the middle of the battle that resulted from that moment, which raged throughout the tenth volume and beyond. At this point, the good guys are struggling, and Arlong, the leader of the evil fish-man pirates they are fighting offers Nami a choice: join him and he'll spare the people of her village, or continue fighting him and he'll slaughter everyone: 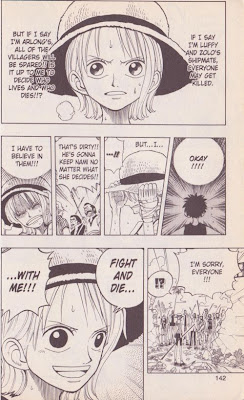 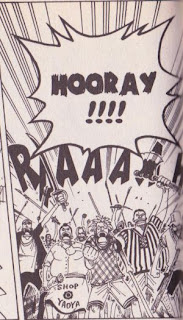 I don't know why, but the way everyone joyously celebrates their certain deaths cracks me up. At this point in the battle, the time for anguished emotions is past, so the idea that they'll all die fighting together is cause for celebration rather than angst. Oda already resolved Nami's emotional conflict, so he doesn't need to rehash it here, and slowing things down for a long bit of soul searching would ruin the momentum he has built up, so it's just a quick moment that gets us fired up to enjoy the fighting which is about to shift in the heroes' favor. Oda definitely knows what he's doing; he plays the audience like an instrument, and we love him for it.
Posted by Unknown at 12:00 PM