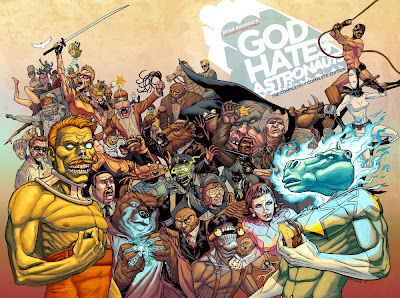 I've been a fan of Ryan Browne ever since I discovered his hilariously insane superhero comedy webcomic God Hates Astronauts, and I'm excited to see his star continue to rise as he develops his unique sensibility of absurdist comedy, mockery of superheroes and other comics tropes, and unsettlingly detailed artwork. After the success of the Kickstarter campaign for Blast Furnace, his other webcomic, he recently launched another Kickstarter campaign for a hardcover collection of God Hates Astronauts, and it was funded within 24 hours, which allowed for the addition of a number of stretch goals and reward levels that reflected his strange comic sensibilities. It's great to see him receive some recognition for the years of work it took to bring this project to completion, and as the campaign marches toward completion (with 12 days remaining, as of this writing), I contacted Ryan with some interview questions:

I love your take on superheroes, which pushes them into full-on absurdity and pointless violence. Is this at all meant to be a comment on or reaction to the current state of the "mainstream" comics industry, or is it just your own take on the genre?


I think it's just a natural avenue for comedy. The ridiculous costumes, the celebration of violence and the male power trip are all hilarious subjects to me. I almost couldn't do anything serious with a spandex clad he-man... almost.

According to the Kickstarter description of the series, the backstory involves NASA hiring the characters to stop farmers who launch rockets into space, but I don't think this is ever explicitly mentioned in the comic itself. What happened there? Was this something from an early script or the "development" stages of the comic, when you were creating the characters, and it ended up getting pushed into the background?

No, it's an attempt to describe the actual "plot" of the book. There are a couple of scenes in the book that mention this mission objective, but honestly as the series was going on, it became the joke that no one was doing their job. You will see the team doctor, Dr. Professor, complain from time to time that people aren't addressing the issue at hand.

How much of this series is you cramming all of your personal obsessions (or just stuff that you like to draw) into the story, like old-timey wrestlers, owls, animal-people, or mustaches?

100%. I'm super happy that people like my jokes and drawings, but honestly I'm just doing it all to make myself laugh.

How much of the comic is improvised? Did you have the plot structure laid out beforehand and inserted jokes and funny scenes as you thought of them? Did you have certain moments in mind and tried to fit the story to accomodate them? Or did you have the whole thing scripted out in your head exactly as it ended up on the page?


It's largely just certain moments and ideas that pop into my head. I then work to figure out how they are all intertwined, Seinfeld-style. Some things just fall into my lap—like one character losing his head, and another character who is just a head which then equals them combining forces. My best skill as a writer is making things connect story wise. I always hesitate to say that I am a writer because me can't not talk English no good. I think of myself as more of a storyteller.

Do you find yourself "pushing the envelope" and trying to come up with the most absurd or profane thing possible? For instance, the titular "head that wouldn't die", which I would call the book's signature visual, is rather viscerally disgusting, and you seem to enjoy coming up with nastier and nastier things to do with it. Do you find it a challenge to make things gross and offensive, but also really funny? Or does that all just come naturally?


I don't really try to gross people out. I don't want people to be uncomfortable when they read my stuff, I try and write things that are more ridiculous in nature than disgusting. Mainly I want people to laugh at how stupid and nonsensical everything is in the GHA world and yet how deadly serious everyone is about it.

You've got an affinity for drawing animals (and animal-human hybrids, and bizarre combinations of animals, etc.) and making them really expressive. Do you do research, consult photos, or practice drawing animals, or is this something you're just naturally good at?

I usually do research an animal the first time I draw it but after that I just kind of wing it and make it my own. That's why Blue Grass at first looks like a cow, and then a horse, and then a donkey, and then a donkey-cow-horse. Obviously, I love drawing animals, but usually they are the Ninja Turtle style of animals.

Who or what would you say are your influences, whether in the world or comics or outside of it? You pay pay homage to Jack Kirby via sound effects, and it seems like the superhero deconstruction of people like Adam Warren or James Kochalka might be an inspiration, but are there any others that helped shape your style of art and writing?

Geof Darrow and Rob Schrab are both pretty influential to me. I think Big Guy [and Rusty, the Boy Robot] and Scud damaged my brain in some way at some point and I've never recovered. A lot of the other inspiration comes from film and television. I think The Simpsons is my biggest inspiration, as well as Spaced, Upright Citzens Brigade, and the Coen Brothers' films.

How did you manage to round up such an array of talented guest artists for the hardcover collection? Are they all friends of yours, or did you have to bribe/threaten/blackmail some of them to get them to participate?

Everyone in the book is either a friend or a fan of GHA. It did take a lot of favor trading to get people involved and a ton of work managing and making sure everybody stayed on task. The end product is something that I'm very, VERY proud of.

What's next for you? It seems like you're dipping a toe into the "big time" with Smoke and Mirrors and guest art on The Manhattan Projects; is there anything else coming down the road, or are you going to keep doing personal projects like GHA and Blast Furnace? Please don't tell me you're going to get stuck drawing Green Lantern Corps or something...

Oh man, Green Lantern Corps would be awesome!!! Currently, I am drawing a second issue of Manhattan Projects and after that I will be taking over for Riley Rossmo full-time on Bedlam. It's exciting to see that things are finally starting to work out, and I hope people will be patient while I work on other stuff than GHA and Blast Furnace for a little while.

Now that I think about it, Green Lantern Corps, or some other book featuring a bunch of weird aliens, could be a neat project for you, especially if you were allowed to add some humor and as long as you didn't have to just draw a bunch of monochromatic guys shooting lasers at each other. Would you be interested in doing something like that, illustrating a well-known character or franchise? Do you have any characters that you would love to get your hands on? Or would you prefer to stick to your own creations or other creator-owned comics?


HAH! I don't think anyone would let me touch their characters! I'd love to at some point get a chance to play in the superhero world like Seth Fisher did, but I need to get a lot better first to allow that to happen. Also I'm pretty sure I'd have to tone down the offensiveness a great deal.

You've got a theme song for the comic as part of the Kickstarter, but have you ever considered doing an audiobook version, considering the "suggested voice talent" that you list for all the characters? Would you want to try to record an audio track of yourself or others doing imitations of the various voices, or is that something better left up to the imagination?

I'm pretty sure I couldn't do it justice. Maybe if the Kickstarter breaks the ten-million dollar mark I can spend it to hire all the actual actors to read their rolls. Wouldn't that be something? Come on people! PLEDGE! 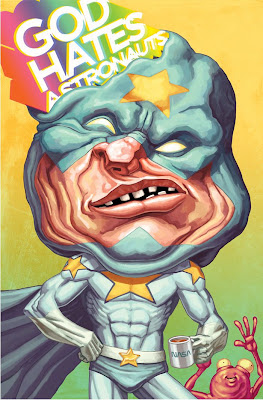