The Neverending Fray: No one enters! 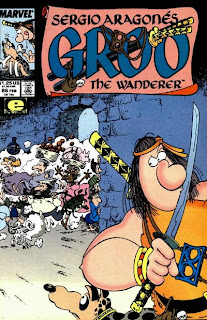 One of the funny things about Groo is that he can be both an unstoppable force and an immovable object; when he puts his mind to something, he's going to do everything he can to accomplish it, whether his goal is acquiring some food, defeating an army singlehandedly, or following some order so obtusely that he completely defeats its purpose. This issue sees him take "immovable" status; having been ordered to guard the entrance to a city and let no one pass, he takes the direction extremely literally, refusing to let anyone enter, including the residents of the city and the army who left him to defend their homes. It's a version of the "don't ever base plans around Groo" rule, but one that's centered in ignorance rather than duplicity, a case in which Groo's stupidity turns what should be a simple situation into a ridiculous problem.

I'm always impressed by the variety of stories that can be told in this comic, and this is a nice example of one of the many approaches to the character. Some of the tales based around him can be complex, with lots of characters bouncing off him and surprising incidents spinning out of his actions, but this story goes the other way, taking a simple concept and just making it funny. Groo simply plants himself in people's way, and they have to struggle to find a way around him, with amusing attempts ranging from bargaining and threats to bribes and trickery: 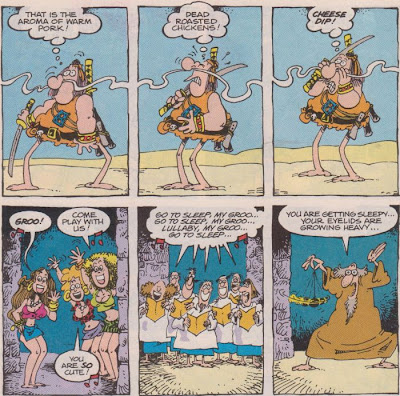 It's funny stuff, although the Groo Crew seems to recognize that it's a little too simple on its own, so that main story actually takes place as a story that one of the town's elders is relating to the others to explain why they've got two entrances (which ended up being the final solution to the issue). He also tells of a neighboring city who ordered Groo to protect a bridge from an invading army, which gives us this amusing moment: 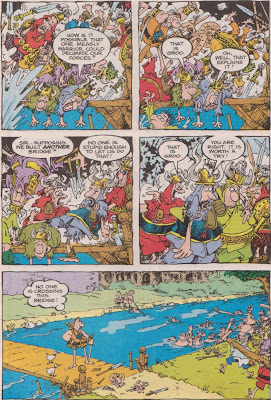 But the final punchline to their mockery of the mendicant who caused so much trouble comes when they realize that the man they hired to guard the door to the room where they were meeting is, you guessed it, Groo! It's an obvious gag that was set up from the beginning of the story, but it's no less amusing when the payoff finally comes around: 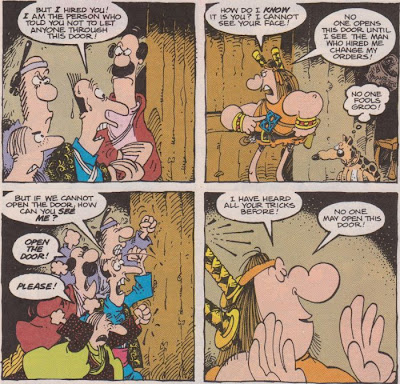 As I always say, the rich world that Sergio and company have created here has endless possibilities for great stories, and seeing them take something so simple and spin it into hilarity just makes me marvel at how skillful they are at this. My only concern is that I'm going to run out of ways to say so.

This issue's stats:
Recurring characters: No regular supporting cast, but Sergio makes an appearance as one of a chorus of singers that tries to put Groo to sleep with a lullaby: 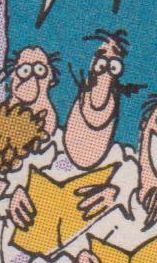 Hidden message(s): Nothing this issue.
Moral: "Only a fool follows orders without knowing why."

Spanish words: The town of Tula might be named after a city in Mexico.
Running jokes: Groo's table manners are so terrible, he eats the bill. He also gets tempted with some cheese dip and says "You take me for the fool I am!" An old joke makes a comeback when someone calls Groo "slow of mind" and he asks them what they mean six pages later.
Mark Evanier's job(s): Doorman
Letter column jokes: Douglas Graen writes to say that he finally broke down and bought a bunch of back issues of Groo, even though he had been boycotting the series for years due to its poor paper quality. This gives Mark the opening to mention the change in format (better paper, more pages, less ads, higher price), which will start next issue, and he apologizes for the price increase, but says that, as the saying goes, three things are inevitable: death, taxes, and higher comic book prices. But then he remembers that there are lots of other things that are inevitable, including the cable going out, people painting your house number on the curb and demanding money (this is the second time he's mentioned this in a letter column, so it must be a real pet peeve), and traffic jams on the Ventura Freeway at rush hour. Samual Wallin writes in with a joke, asking why elephant are big, grey, and wrinkly. Mark thinks about it and says that it can't be the old gag that if they were small, white, and smooth they would be aspirin, but Samual contributes another letter with that exact punchline, causing Mark to remember not to overestimate the class of Groo readers. He then prints a few Grooism entries: Tomas O. Togmdha contributes two, with the first being a time a friend said he couldn't tell someone the time because his watch is five minutes fast, and the second being when he said "I wish I could swim well. What if I was on a ship and it drowned? I could sink?" Ryan Poenisch tells of a friend's comment upon watching a commercial from the National Arbor Day Foundation: "What does planting trees have to do with a place you park boats?" Returning to jokes, Andrew Zombek asks if he can "computer scan" Groo into his law school briefs, and Mark says lawyers already have a bad enough reputation in this country. Chris Carter threatens to sue the "Groo Dudes" if they print his letter, but Mark says he's not worried, especially if Chris gets Andrew Zombek to represent him. And, in a final comment, Mark thanks actress Jewel Shepard, star of Hollywood Hot Tubs II, for "services above and beyond the call of Groodom", whatever that means.
Posted by Unknown at 6:00 PM