Art What I Like: One Piece Is Awesome, Example #14

I love the cartoony sensibility that Eiichiro Oda brings to One Piece, and the expressive characters are always a real highlight of the artwork. It's shonen manga, so there's a lot of exaggeration, but somehow, Oda is constantly pushing it to new levels, with characters often sporting mouths so wide open with laughter or screams that they stretch to at least twice the size of the rest of their heads. One would think so much high-volume reaction would end up being monotonous, but Oda regularly comes up with new ways to demonstrate surprise, disbelief, anger, and all manner of other emotions. Here's a current favorite, from a scene in volume 21 in which horndog Sanji is fighting Mr. 2 Bon Clay, who can assume the appearance of people he has touched: 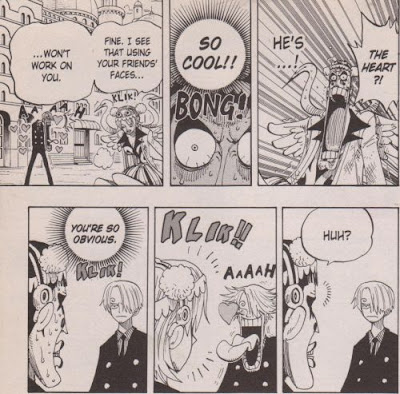 I don't know why, but this moment cracks me up. Sanji is regularly depicted as swooning over beautiful women, especially the Merry Go's navigator Nami (who Mr. 2 Bon Clay is emulating here), but the sudden appearance of a Tex Avery-style freakout is just hilarious. It might be that Sanji was presented as the serious half of the battle, stoically rebuffing Mr. 2 Bon Clay's ridiculousness, only to suddenly assume an even sillier expression himself, or maybe it's the way the expression is turned on and off like a light switch, but whatever the case, it's a great example of Oda's facility with humor, even in the midst of incredible action. You never know what you're going to get in this comic, but it almost always lands perfectly and gets a big reaction. Oda is a pro, no matter how much it seems like he's just throwing nonsense onto the page.
Posted by Unknown at 12:00 PM