Art What I Like: One Piece Is Awesome, Example #11

Most of the stuff I've been pointing out as cool in Eiichiro Oda's One Piece is how he takes on some of the standard stuff in shonen manga, but by the 16th volume in the series, it seems like it had gotten popular enough that he could just do crazy stuff because he felt like it, or because it amused him. Here's a case in point: 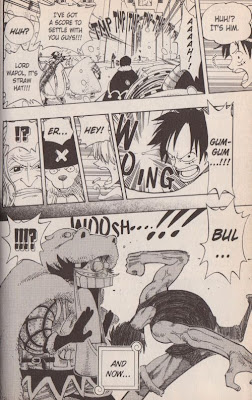 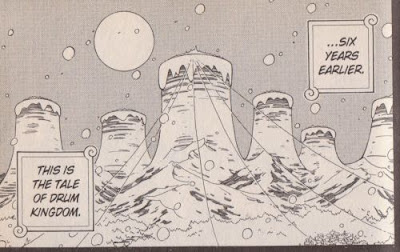 That scene comes right after the introduction of a new character (Tony Tony Chopper, a talking reindeer with excellent medical skills), and for the sake of a gag, Oda pauses in mid-punch for an 80-page flashback to detail the character's backstory. And it's an excellent bit of tragic drama, featuring plenty of angst from a character who, due to his ability to talk, is alienated from both his own kind and humans, then is taken in by a "quack doctor" who, even though he seems to have no medical knowledge at all, has declared himself a pirate against sickness (including that which his land is suffering from due to poor leadership) and is seeking a cure to all disease by causing cherry blossoms to bloom in his snowbound country (sure, why not?). But while we're enjoying this suitably insane exploration of Chopper's history, that unfinished punch is still hanging over our heads, and when the flashback ends and we finally get the payoff, Oda delivers in spades, with an amazing volume-ending moment that elicits laughs and cheers: 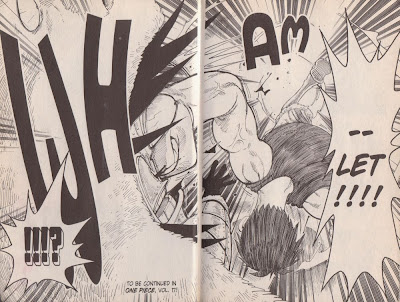 Man, I love this series more and more as I keep reading. It's pure, neverending awesomeness.
Posted by Unknown at 6:00 PM