Art What I Like: One Piece Is Awesome, Example #15+

One of the common sources of amusement in superhero comics comes from when characters are fighting and somehow deliver speeches or have exchanges with each other while they're flying through the air and punching each other. It's one of those quirks of the comics medium, and it can be a suspension-of-disbelief-breaking moment when somebody has time to speak several sentences in between when they throw a punch and when it lands. But it's not always a dealbreaker, as Eiichiro Oda proves in this scene from the 21st volume of One Piece. For context, good guy Sanji (the Straw Hat Pirates' cook, who fights with his feet to preserve his hands from any damage) is fighting bad guy Mr. 2 Bon Clay (who can take on the appearance of anybody he has touched, but reverts back to his normal appearance when he touches his face), and he's having trouble because the latter keeps impersonating Nami, and he can't bring himself to hurt even a simulacrum of her face: 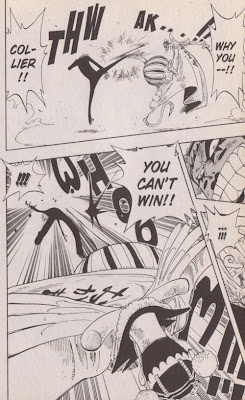 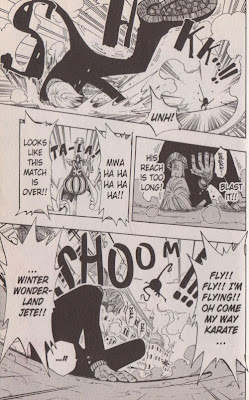 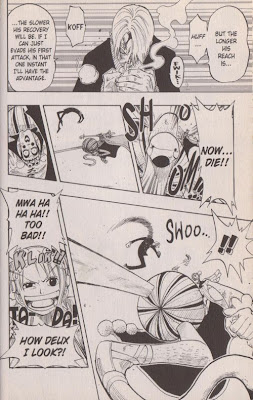 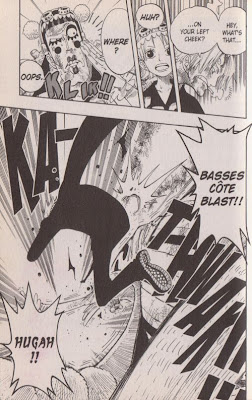 Amusingly, Sanji has time to reflect on Mr. 2 Bon Clay's weakness (and also light a cigarette!) while the latter is flying through the air to kick him. And then, after avoiding said kick and responding with a kick of his own (one so fast that his leg is an indistinct blur), Sanji has time to have an exchange with Mr. 2 Bon Clay and trick him into reverting to a kickable face before it lands. It's ridiculous, but it fits in with the exaggerated nature of the action in this series, and thus becomes awesome. Realism isn't the slightest concern in this comic, so there's no need to nitpick the details; just enjoy the craziness.

Also of note in this sequence is Oda's use of distorted perspective to exaggerate the action. He does this a lot, with characters punching or kicking "into" a panel, and their limbs become elongated to the point of absurdity, surrounded by speed lines that almost make it look like the reader is staring into a tunnel, eyes drawn directly into the target of the blow. I love the way Mr. 2 Bon Clay's leg almost gets lost among the speed lines on the first page above, and Sanji's leg does something similar on the last page; it's like a massive burst of energy is being directed right into their opponent's face. I love the way Oda makes all these elements work together to deliver such amazing action, and he does it over and over, with enough variations that it never gets old.

Also also, this is as good a time as any to talk about the craziness of Mr. 2 Bon Clay. Just look at this weirdo: 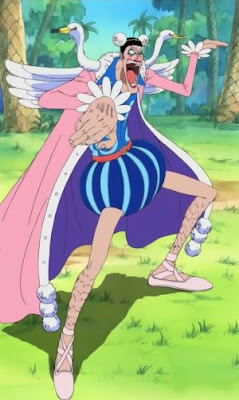 He's a seriously insane character, a flamboyant goofball who wears makeup, a poof-ball headband, ballet slippers (which draw attention to his hairy legs), what appear to be beach ball underpants, and a coat with decorative wings and weird swan protrusions on the shoulders. He's apparently supposed to be a transvestite/drag queen, but if he's coded as gay, it's not seen as threatening by other characters; if anything, he's just annoying. The English translation seems to downplay the gay aspect (although there is one point in which he impersonates a king, and somebody makes a comment about him being both a queen and a king, and there are some references to him being both male and female), or at least leaves it as a subtle aspect of his character for older readers to recognize. In the original Japanese, he refers to his fighting style as "Okama kenpo", which translates as "Crossdresser Fist Way", but in the English-language manga, it is called "Oh Come My Way Karate", which is an amusing way of turning it into a pun on the original word while adding some vague flirtatiousness. I'm kind of fascinated by how bizarre he is, while still remaining a dangerous threat that is taken seriously by the characters (in fact, I think he becomes friends with the Straw Hat Pirates after this storyline, in classic shonen manga fashion). He's really just another bit of craziness in this world that Oda has created, fitting right in alongside people who can turn their bodies into wax/swords/spikes/sand/etc. He's nuts, but I kind of love him.

Bonus! For a good time, check out a Google image search for "2 Bon Clay cosplay".
Posted by Unknown at 6:00 PM