Art What I Like: One Piece Is Awesome, Example #4

One thing I enjoy in shonen manga is the Greek chorus that often forms of onlookers to a battle who react in astonishment to what is going on, shout encouragement or warnings to the participants, and just generally react to the awesomeness and craziness of what they are seeing. Eiichiro Oda does this really well in One Piece, and it gives him a chance to draw more of the gaping mouths and exaggerated expressions he loves so much. He's a good example, from the eighth volume of the series: 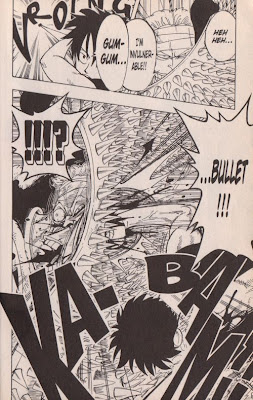 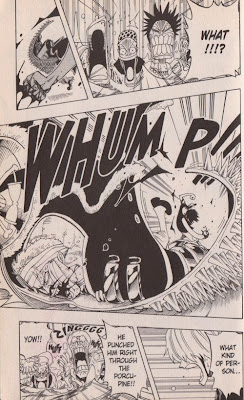 I love the visceral intensity of the action (check out how the bad guy's jaw seems to be flying off his face when he gets punched!), but as awesome as it is, the reactions of the onlookers dials that intensity even higher. That last page is especially hilarious, with one guy screaming in shock so loudly that his gaping mouth has overtaken his entire head, another gritting his teeth and scrunching up his face in anger, and others bugging their eyes out and spouting tears of sympathetic pain. Between the action itself and the way it is affecting the witnesses, it's clear that we're watching a momentous, life-changing event. Oda sells the awesomeness of his battles not only through the incredible action itself, but in every other element of the comic, from the flabbergasted reactions of the people on the sidelines to the devastated wreckage of everything surrounding the fights. Reading this series isn't just a fun adventure, it's a full sensory experience.
Posted by Unknown at 6:00 PM