The Neverending Fray: Groo might be more dangerous when you don't see him coming 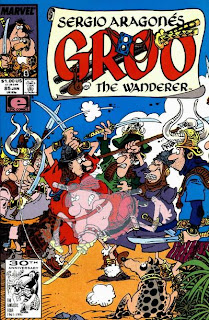 What we have here is a solidly entertaining story that delivers on the cover's promise of Groo being turned invisible, and hilarity ensuing. It starts when we see the aftermath of Groo's visit to some kingdom or other (the king complains that Groo always destroys his kingdom, but I don't know if we've ever seen him before; he doesn't even get a name and seems to be just a generic king character), which is impressively destructive even after all the stuff we've seen Groo wreck before, with sunken ships, burning buildings, collapsed walls, and many injuries. The king is so upset that he hires Arba and Dakarba to get rid of Groo, but as expected, their spell doesn't obliterate him, it just makes him invisible (and also soundless, since nobody can hear him talking, but they still notice his terrible smell).

And thus the wackiness ensues, as people find out about Groo's apparent death and try to seize advantage. Pal and Drumm try to find a way to profit, and Taranto immediately attempts to steal Rufferto's jeweled collar, but they all find out the truth pretty quickly, and learn that they can be assaulted just as badly by a Groo they can't see: 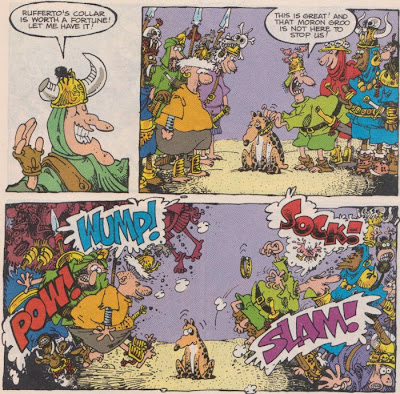 I like the way rendering Groo unseen emphasizes the other details of his attack, like the way the decorations on the bandits' helmets seem to come to life in surprise, and physical reactions to invisible attacks make for great slapstick violence (look at the slice that appears across the guy in the yellow shirt's stomach!).

Here's another great example of invisible Groo destroying a large group of goons:

It's like Groo's power levels have gone up when he's unseen; he can normally send some guys flying, but here it's like an explosion went off and scattered a couple dozen people through space. It's pretty awesome.

This is a fun issue, although it might be a bit overstuffed with guest stars; it probably wasn't necessary to include both Pal and Drumm and Taranto, when one of them would have sufficed to grasp the concept of an invisible Groo and give him something to beat up. But that's a nitpick; this is an entertaining bit of goofiness with plenty of amusing violence and a satisfying comeuppance for all who cross Groo's path. I'll allow it.

This issue's stats:
Recurring characters: Arba and Dakarba, Pal and Drumm, and Taranto, plus the Groo Crew are featured in the Groo-Grams header:

Hidden message(s): While the official hidden messages have been retired, I noticed some interesting titles on the books in Arba and Dakarba's lair, including Viva MAD:

And what appears to be a shout-out to the daughters of the Groo Crew and some of their friends: 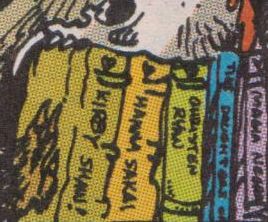 Moral: "Just because you do not see it does not mean it is not there."

Spanish words: Some of Arba and Dakarba's books feature the word "magia", which means "magic".
Running jokes: Groo is lured into a trap with the promise of cheese dip. Drumm calls Groo a mendicant, and gets pummeled for it. He also wonders if Pal is going to buy him a house, and thinks "What pirates?"
Mark Evanier's job(s): Twaddleizer
Letter column jokes: This month's column is devoted to Grooisms. Nick Gill writes of a time in which he wanted to play ball when the ground was wet, and when asking how to get rid of the water, his brother suggested washing it off with a hose. Rick Chronik (who I think used to open for Dr. Dre) tells of a friend who noted that he lived within walking distance of his home. Lisa Lerner describes a time a friend warned against opening an umbrella indoors, and when asked if she was superstitious, replied "No, but I don't want any bad luck." Abbie Gardner implicates herself, mentioning a conversation in which a friend questioned her intelligence under their breath, and she said "Hey, I heard that! I'm not blind, you know!" Brad Butler shares an encounter with a stranger who saw him yo-yoing with both hands and said "I'd give my right arm to be ambidextrous!" Finally, Teddy Dastick makes fun of the brother of a fellow altar boy for asking what time midnight mass is. In other content, Mark reminds readers of the upcoming price increase, but he notes that the better printing will allow readers to see all the people Sergio draws into the background, which makes this "the only comic that makes a Where's Waldo book look unpopulated." He also plugs his writing for the upcoming cartoon adaptation of the comic strip Mother Goose & Grimm, and asks readers where he (and Walt Simonson, who was also interested) might be able to see an animated film called Great which was released by the National Film Board of Canada (I tried to find it online, but I couldn't find anything by that title on the National Film Board's site, and the title is generic enough that Googling didn't yield any results).
Posted by Unknown at 6:00 PM