Art What I Like: One Piece Is Awesome, Example #7

In a shonen manga, there's kind of a guarantee of action (even if the series isn't all about fighting), so it can be fun to see what sort of unique styles the creators can bring to the table. And if anybody is unique, it's One Piece's Eiichiro Oda, with his goofy elongated characters and penchant for exaggeration. There are too many examples of awesome action to choose from in each volume of the series, but among all the speed lines, blood splatters (and by the way, there's something about the copious blood flow in this series that keeps it from being gratuitous and gross like it is in so many modern superhero comics, but that's a discussion for another time), shouted proclamations, exciting moves, and shattered rubble, there's an occasional moment that stands out, at least for me. Here are a couple from volume 11: 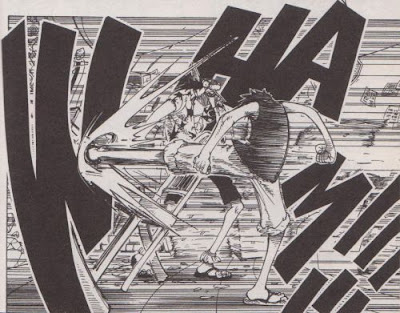 In this one, I just like the way it looks like Luffy is kicking the "WHAM!" sound effect and making the letters scatter across the panel. The translated sound effects in the English-language version of the series are really well done, integrating with the art in a way that's readable while still remaining in the style of the original Japanese characters, and this is a good example. 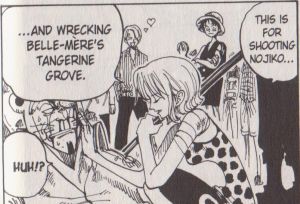 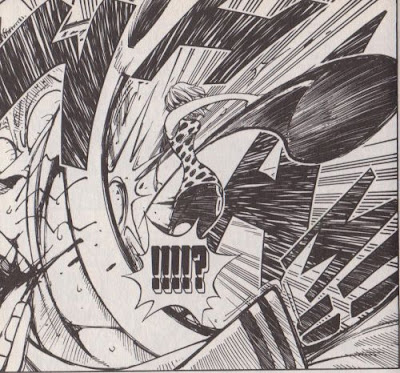 And here we see what is probably the biggest and most satisfying wallop of the volume, a surprisingly cheerable moment, even though it's being delivered to someone other than the main villain by one of the supporting characters, and it's a case of a guy being beaten up after he's already down. But sometimes you just want to see despicable characters punished, and man, it looks like this guy is being hit so hard he's going to fly off the page and smack into the reader's forehead. Oda engages in some crazy distortion in his artwork, and this is one of the most extreme cases I've seen in the series, with Nami's body contorting like a twisted rag, her staff stretching to look like it's thirty feet long, and the guy's face being smashed so hard it looks like the pieces of his shattered skull are going to erupt out of his head. It's awesome. And you can see more like this every few pages, or so it seems when reading the comic, which sets up situations with real stakes and seemingly impossible battles, then builds to moments of incredible catharsis through earth-shaking violence. What more do you need in a comic?
Posted by Unknown at 6:00 PM