The Neverending Fray: Even Groo knows that censorship sucks 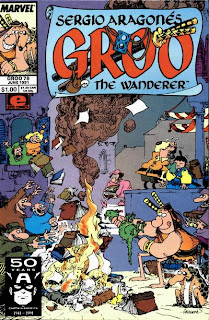 I have no idea if any Groo comics were ever the targets of censorship, either outright bans or the "Won't someone think of the children?!" type of moralization, but even if it never happened, it's important enough of an issue that it makes sense to base an issue of the series around it, providing some laughs about the stupidity of those who think the world's problems can be solved by limiting people's access to information, while seeing how Groo reacts to the societal chaos (some of which he didn't even cause!) going on around him. That's not a bad idea, and it follows the trend of social commentary stories that this series occasionally does; I always like when it's acknowledge that Groo is a force of chaos and destruction, but the world around him is pretty crazy too, prone to societal upheaval, corruption of those in power, and oppression of the weak. Somehow, I find it less depressing when death and ruination is a symptom of the ills of society rather than the work of just one man.

The villain of this issue is a man named Bowdler, and he gets introduced on the first page as a seemingly-insane crusader against "violence", although the insanity mostly comes from him stating outright the contradictions that have to exist for censors to function: 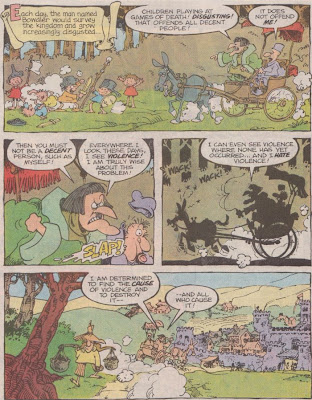 Bowdler is the official censor of the kingdom which Groo is currently wandering through, and it also happens to be where Weaver and Scribe are hanging out enjoying the success of their latest book, which, yes, is about Groo and all the violent stuff he does. So when Bowdler sees Groo beat somebody up after apparently reading Weaver's book (he actually was attacking somebody for calling him a mendicant), his quest to censor the book is on, and it soon grows into a ban on all books and, in a demonstration of what censorship is really about, an attempt to seize control of the kingdom for himself and force everyone to live according to his standards of acceptability.

It's an amusing story, but like good satire should be, it often causes more anger than laughter, since one recognizes too much of the real world in the jokes. Mark and Sergio manage to get some laughs out of the absurdities that come from trying to pin the world's woes on ideas:

But they also do a bit of straight-up preaching to readers to not let this sort of thing happen: 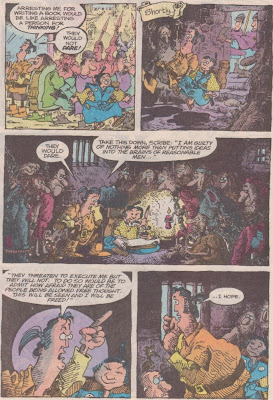 Eventually, Bowdler is undone when he puts Weaver on trial for writing his book, and he calls Groo as a witness to prove that reading the book (which is about Groo's violent lifestyle) is what made him so violent. It's dumb of him, with his eventual downfall being obvious, since we all know that Groo can't read, but what I find striking is that as hysterical as his arguments are, they're somewhat compelling, at least on a superficial level: 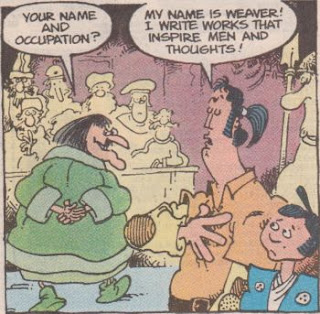 "If you wish to inspire men's thoughts, and you write of death and war, then that means you're trying to inspire them to death and war!" That sort of twisting of words is a good demonstration of how insidious censorship is; charismatic people who claim to be acting for everyone's good can be persuasive, and that's what makes them dangerous. If only the real-world villains were as shortsighted and nutty as Bowdler.

If there's anything to complain about in this issue, it would be the standard gripe that Groo kind of gets sidelined in favor of the main plot, but when that plot is such a nicely-done satire, that's an acceptable offense. This isn't always the case, but in this instance, the Groo Crew balances the elements of the story well enough that it works like a charm. Not every issue of Groo should be a "message" story, but if they were all this well done, that wouldn't be a problem.


Next: This is where the gaps in my collection start to show; we're skipping ahead to issue #84, "The Puppeteers".
-----

This issue's stats:
Recurring characters: Weaver and Scribe. Plus, a puppeteer has a Usagi Yojimbo puppet: 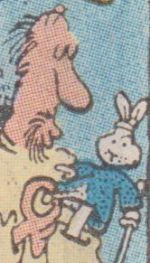 And this appears to be the back of Alfred E. Neuman's head: 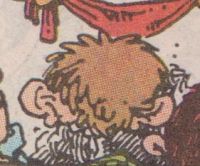 Spanish words: None.
Running jokes: Groo gets called a mendicant. Rufferto bites a guy on the ass. Together, their table manners horrify polite society.
Mark Evanier's job(s): Librarian
Letter column jokes: Kevin "Doofus" Brazier makes the Grooish suggestion to devote an entire letter column to Grooisms (Mark follows this advice), then offers one of his own, in which he stubbed his toe, a friend said that only someone stupid would do that, and then the friend did the same thing. Ed Shannon tells of a fellow professor who had failed each of a student's papers for a semester until he decided to offer some mercy and give him a D, after which the student dropped by his office and asked if the D would affect his average (Ed also suggests the encouragement via a D grade as a Grooism). Rick Juckes and Gregg Stagg suggest Australian Prime Minister Paul Keating's comments, in which he said "It's the OECD's annual meeting, which I try to get to at least once every year." Gary Sutton "of the Courts of Chaos" describes a Dungeons and Dragons session in which he commented, upon engaging in a battle with some orcs, "Nothing like a good battle to get the blood flowing." (This is an interesting example of a Grooism, since it's kind of a joke with a double meaning, if an inadvertent one, rather than just something dumb, but it's still something that Groo would say. Fascinating.) Kerry "Mulch" Walker mentions a time he entered a comic store and asked "Do you have Groo?" to which the woman behind the counter replied "Why? Do I look pale or something?" Finally, Jim Mourra relates a classic gag in which a woman asked a friend of his which bus stop she should get off on, and he replied "You just watch me. When I get off, you want the stop before that."
Miscellaneous: I remember these basketball cards, and I thought they were cool, but I don't know how one would confuse them with a computer game: 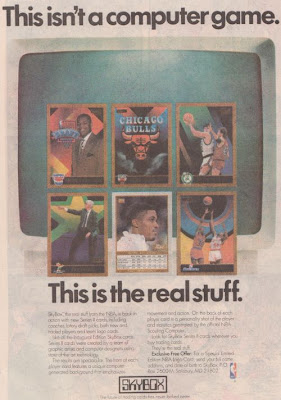