Art What I Like: One Piece Is Awesome, Example #12

I'm currently up to volume 20 of Eiichiro Oda's One Piece, at which point the story is building up to the big climax of the "Baroque Works" saga (although there are still at least three more volumes to go before it's over), and I'm loving it as much as ever. True to its name, this storyline seems to be about excess, with tons of characters being thrown into the mix (I think there are at least a dozen major players all bouncing off each other at this point), each one crazier than the last. That's something that Oda does so well, just coming up with weirdness and silliness (I'm sure I'll get to Mr. 2 Bon Clay soon enough...), throwing in lots of jokes, but still treating it all seriously enough to keep the reader invested in the outcome. Here's one of my favorite character introductions so far: 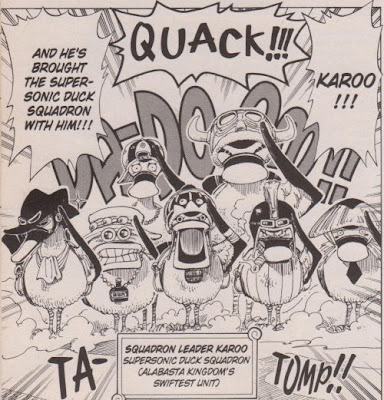 That's right, it's the Supersonic Duck Squadron! I love these guys; they're goofy anthropomorphic animals wearing wacky costumes and sporting silly expressions, but they're still badasses, showing up in the nick of time to save the day. Like so much of the series, their introduction makes me laugh, but it also makes me pump my fist in anticipation of awesomeness to come. I don't know how Oda manages to maintain such a delicate balance between ridiculousness and awesomeness, but he's obviously one of a kind, since there's nobody else that can pull it off like he does.
Posted by Unknown at 6:00 PM