The Neverending Fray: Groo's world would be a horrible place to live 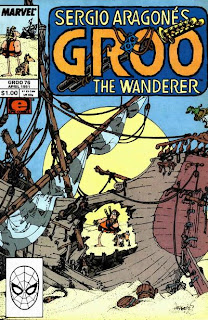 I doubt I'll ever run out of things to say about Groo, but issues like this one occasionally pop up that make me consider that it might be a possibility. While it's not terrible or anything, there's just not much that is memorable about it, which I suppose makes it something of a failure. Its story seems like it should be compelling enough: some travelers come across a sunken ship in the middle of a desert and wondered how it got there, and then the Sage happens across their camp and offers to tell the story, which involves Groo, of course. We find out that the area used to contain a mining town next to a lake, but the town made the mistake of hiring Groo to protect their silver shipments. After he allowed their caravans to be robbed repeatedly by Taranto, they tried building a boat to ship them across the lake, but Taranto and his men also built a boat and continued to steal from them. So Groo ended up opening the floodgates and emptied the lake's water into the mines, hoping to drive out the pirates he was sure were hiding there (long story), and thus the livelihoods and ecosystem of the entire area were destroyed. The end!

I'm all for darkness in stories, but this is one of those cases where a bunch of regular folks are utterly screwed through no fault of their own, and it's less funny that horrible. I always prefer that people who are ruined by Groo end up that way because they tried to control him or were somehow punished for something they did, but it's understandable that his chaos is going to affect people who don't deserve it. This case seems somehow different and "unfair" to me though, since these people were really just normal, hard-working folk who were unfortunate enough to be in Groo's path. Them's the breaks, I guess.

Compounding the unfairness is Taranto's lack of comeuppance; he repeatedly makes a fool of Groo here and uses him to rob the people blind, and he completely gets away with it. He seems to be one of the rare exceptions to the rule that people who plan on Groo to do something always end up having their plans turned back on them. As a regular supporting character, he can't be completely destroyed, but letting him get away scot free, having ruined these people and not borne any consequences, just rankles.

Finally, there's the late-issue appearance of Captain Ahax, who I usually enjoy quite a bit, but here he seems like an unsuccessful attempt to inject some humor and/or provide a means for making the plot work (he won't let Groo on the boat, so the pirates' attack is successful). His classic delayed reaction to seeing Groo does provide one of the better laughs of the issue though:

I guess that's the real reason this issue doesn't work for me: if there were good gags, amusing wordplay, hilarious details, and general funny stuff throughout, my complaints wouldn't matter, but this issue is mostly devoid of all of that. I might be judging it too harshly, since reading so many issues in quick succession has probably dulled the novelty of the jokes and made them less effective than reading the issues on a monthly basis would, but where other installments of the series stand up and provide laughs throughout, this one mostly misses. I guess we're all entitled to an off month now and then; hopefully next issue will rebound back to hilarity.

This issue's stats:
Recurring characters: The Sage, Taranto, and even Captain Ahax. Plus Mark and Sergio show up in the Groo-Grams header:

Hidden message(s): Unfortunately, I did not find it.
Moral: "There is a lesson to be learned from every bit of misfortune."

Spanish words: Appropriately, Minas means "mines".
Running jokes: In order to distract him from guard duty Taranto tells Groo a fish called him a mendicant. Groo thinks "Did I err?" and he manages to sink a ship, albeit indirectly.
Mark Evanier's job(s): Blaterator (possibly a play on the Italian word blaterate, which means "to blather", which would make Mark's job "blatherer")
Letter column jokes: This month's column has a few short joke letters, with most of the readers referring to Mark as Zigfried. Philip Hicks asks for advice with a problem that he can't tell Mark about, because it's personal. Mark suggests hot compresses and a mail-order course in Motel Management. David Carroll asks how many Groos it takes to screw in a light bulb, and Mark says all of them, plus an electrician. Damian Siegler asks why issues of Groo have a poem at the beginning and a moral at the end instead of the other way around, and Mark says it's so people don't read them backwards, which would cause them to make even less sense. The longest letter comes from Richard Gunn, who accuses Mark of writing all the letters printed in Groo-Grams (including this one), citing as evidence the fact that they always fit perfectly onto a page, that they are all written in the same printed writing, and that none of them have ever used the word "archaeopteryx", because he doesn't think Mark knows how to spell it. He demands an apology, which confuses Mark, since if he wrote the letter, he's not sure if he needs to apologize or not. Mark ends the column with a letter to himself that plugs Hollywood Superstars and describes what will happen in the next few issues.
Posted by Unknown at 6:00 PM