The Neverending Fray: Be careful what you wish for, and other cliches 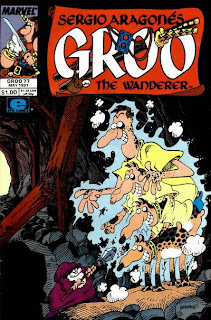 This issue seems like it was influenced by Mark Evanier's work in animation, since it sort of resembles the plot of a half-hour cartoon in which something big happens to the characters, but everything is restored to the status quo by the end of the episode, with lessons learned, hearts warmed, yada yada yada. That big change: Rufferto gets turned into a human after rescuing a magical gnome who was trapped in a mine. That seems like it should be a big deal, with the newly humanized companion finally able to talk to his friend and hero, and the two of them able to go on adventures like never before. But no, they just hang around and work in a mine, and while Rufferto-the-human makes friends with Groo, he keeps his "true identity" a secret for no real reason. Then, when they get trapped in a cave-in, Rufferto is too big to squeeze his way out and get help, so he wishes he was a dog again and saves the day. It's a bit too easy and pat (especially since the gnome indicated that he wouldn't be able to undo the wish, and also that Rufferto would regret it, which wasn't really the case either), without any real exploration of the idea of Rufferto's greatest wish being granted, only to turn out different from what he expected. This didn't have to be a long, multi-issue arc exploring the ramifications of how the change in status quo affected the characters' emotional relationships, but there's barely even a shrug in that direction (Groo wonders where Rufferto went, and Rufferto smiles because he knows Groo loves him, and that's pretty much it). It ends up being kind of a cheap contrivance, something that should have more resonance but feels glib and superficial instead.

I can't presume to tell the Groo Crew how to do their jobs, so I'll refrain from complaining about missed opportunities and point out what I did like. There's a good scene in which Groo insists on a job in the mine, which leads to a fight with a bunch of the workers:

That's a good joke, but I also like Groo's expression in this subsequent panel during the fight; it's like he's in a state of pure bliss when beating the hell out of a large group of people: 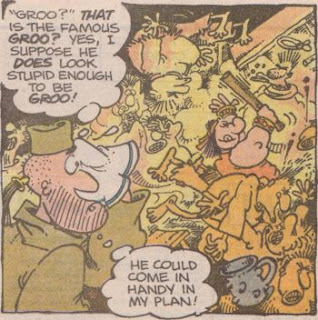 And here's a depiction of Rufferto's idea of what life with Groo will be like now that he's a human, making one imagine the sort of thing that could be explored in a story like this:

And that's about it. In the end, the story seems to be a celebration of Rufferto's loyalty and his friendship with Groo, which is nice; I guess I just wanted something deeper and more meaningful. Of course, I might have been looking in the wrong place; this is Groo, after all...

This issue's stats:
Recurring characters: None. But look, here's a book written by Weaver: 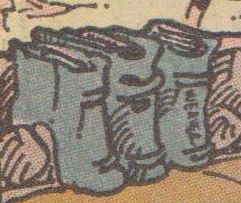 Hidden message(s): Nope, didn't find it. In fact, Mark notes that they're stopping the tradition of hiding them as of this month, and he doesn't think there's one in this issue.
Moral: None, although the poem, which is featured in captions throughout the issue rather than just on the title page this month, ends with "The greatest gift to wish for/If your magic wish comes true--/A friend who's as devoted/As Rufferto is to Groo," and that's a pretty good moral.

Spanish words: None.
Running jokes: None, really, unless you count various jokes about Groo being dumb, like him not being able to count or responding to someone saying that only an idiot would want to work in the mine with "Well, I want to work there!"
Mark Evanier's job(s): "Written by" (!!!)
Letter column jokes: When David Sutherland asks how old Groo is, Mark says nobody knows, even Groo, since Groo can't count, but he does use the opportunity to plug the forthcoming The Life of Groo graphic novel. Kenneth Wakfield notes that Mark has no life, since he spends it writing silly jokes for comic books, so he advises Mark to get out, take a walk, and do something else with his life. Mark doesn't respond, but when "Wald/Scott/Rex Moss" asks if he knows a good mental health professional, he suggests Kenneth Wakfield. Doug Cuff notes that according to the copyright information in every issue, all characters and their likeness are owned by Sergio, which includes Mark. Mark responds that it's gotten really bad, with Sergio suing Mark's mother for taking his photograph and demanding a royalty every time Mark looks at somebody, but Mark is getting back at him by filing a patent on facial hair.
Miscellaneous: I was amused by the artwork accompanying some video games this month. First, there's this alien eating a Game Boy: 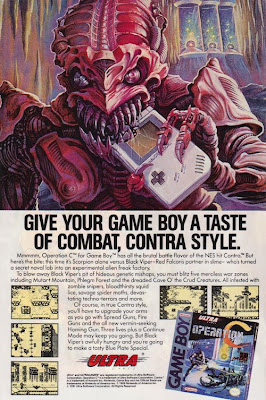 And this goofy photo of Cobra Commander: 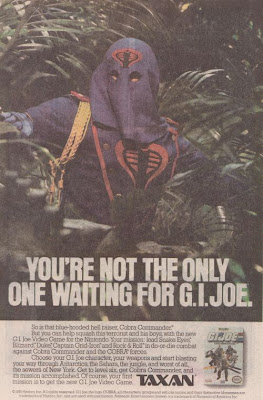