The Neverending Fray: TV is for dummies, but what about Groo comics? 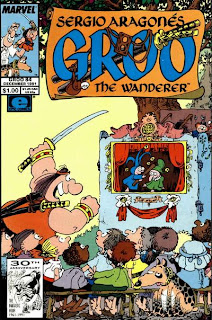 Here's an example of a certain kind of "social commentary" issue of Groo, in which a certain aspect of modern life is filtered through the comic's quasi-medieval setting with amusing results. This might get tiresome if done too often or in a way that's too preachy, but it's mostly just funny here, with a look at what passes for TV in Groo's world: puppet theater. If there's any message here, it's the old directive to get out and see the world instead of looking at a screen all day, but the best part of the story is seeing Mark and Sergio detail the origins of how a competing pair of puppeteers manage to duplicate all the stuff that TV does to keep people watching, like dumbed-down shows full of mindless violence, paid sponsorship, reporting on the news, the invention of TV dinners, 24-hour programming, and the establishment of networks all across the land. It's a pretty accurate portrayal of people's relationship to what they watch, and the way that reasonable choices people make can lead to physical, intellectual, and moral laziness without anybody realizing it.

This does end up being another issue in which Groo is kind of stuck on the sidelines while the story plays out, although he does contribute some funny stuff, mostly through insisting that the puppeteers include more hitting  in their shows. But the rest of the satire is so on point, one barely notices. I especially like some of the little gags, like this puppeteer reporting on the weather while looking up in the sky to make his prediction: 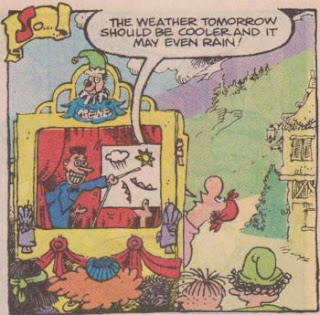 Or this parade of late-night programming that resembles televangelists, dating services, and infomercials:

And the creation of children's shows that are thinly-disguised advertisements for toys must have been something of a personal issue for Mark Evanier (who wrote for various cartoons of the time): 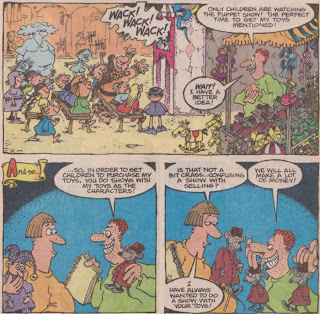 This sort of thing could occasionally get tiresome, but this example of it is pretty darn entertaining, making for a skewed look at modern society that's exaggerated and simplified just enough to make us realize how true it is. It's the sort of thing that the Groo Crew does incredibly well (along with all the other stuff they do so well, of course); I'll take more, as long as I also get to see Groo wrecking stuff. More hitting!

This issue's stats:
Recurring characters: A bunch of them show up in the Groo-Grams header (and Mark and Sergio are in Groo-Grams itself):

In the actual story, here's the back of Alfred E. Neuman's head again: 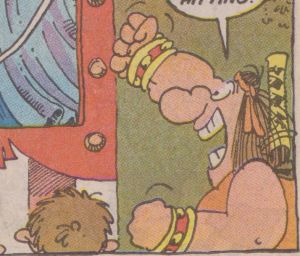 And speaking of MAD, these puppets look like some of the Usual Gang of Idiots: 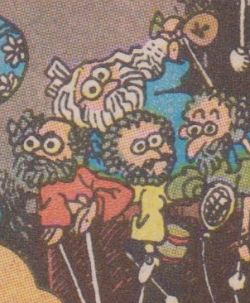 Hidden message(s): Mark said there weren't going to be any more of these, but this issue has one right on the cover, with the puppet theater being titled "The Secret Message": 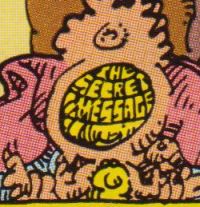 Moral: "Your life is the greatest show of all. Do not let anyone else direct."

Spanish words: One puppeteer advertises the "elixir of ruda", and ruda is Spanish for the herb rue. It's not Spanish, but one of the puppeteers is named Pupi, after the Opera dei Pupi, which is the traditional Sicilian marionette theater (you can see an example of a performance here). Another puppeteer is named Rene, presumably after an old-school showbiz personality who did puppets on various TV shows and in Las Vegas (here, have another video).
Running jokes: Groo gets called a mendicant.
Mark Evanier's job(s): Manipulator
Letter column jokes: This month, the letter column is replaced by a strip in which Mark and Sergio explain that the comic will no longer be sold on newsstands starting with issue #85, and in issue #87, the price will go up to $2.25 (from $1.00, which is quite an increase!), with "more pages of story and better printing." I'll talk more about that when we get to it, but it marks a pretty big change for the comic, with backup strips, a longer letter column, a Rufferto comic on the back cover, and an introductory message from Mark and/or Sergio on the inside front cover. Neat!
Miscellaneous: I like the pun in this ad, as well as all the cool fightin' moves on display: 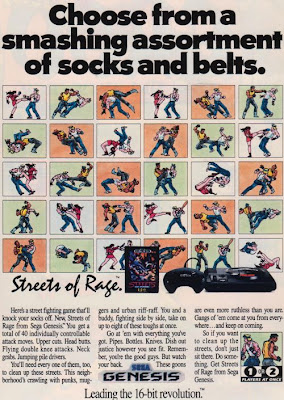