Art What I Like: One Piece Is Awesome, Example #13

I love the way that shonen manga is all about friendship, loyalty, determination, and other such virtues in the midst of bombastic action, and Eiichiro Oda's One Piece does this as well as any comic I've ever read. In fact, the displays of heart in the midst of incredibly hard-hitting fights are often just amazing, leaving the reader open-mouthed in astonishment at how effectively Oda sells it all, and then cheering in jubilation when the good guys win. Here's a great example from volume 20 of the series.

Actually, the sequence probably requires some explanation first; while the action is pretty clear and understandable in the context of a full story, taking a mid-battle sequence on its own might be somewhat confusing. In this scene, good guys Usopp and Chopper are fighting some villains: Ms. Merry Christmas, who has mole powers; and Mr. 4, who wields a four-ton baseball bat (along with a gun that is also a dog, because that's crazy). The mole-lady has just insulted Usopp's friend Luffy's dream of becoming king of the pirates, and this has solidified the sometimes-cowardly pirate's resolve, just as she begins to grab his feet and drag him along the ground to crash into obstacles: 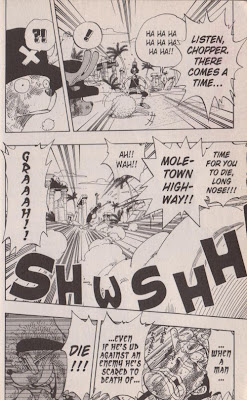 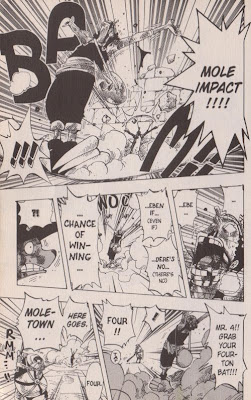 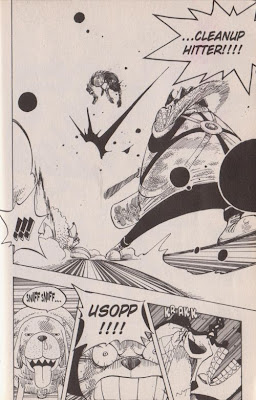 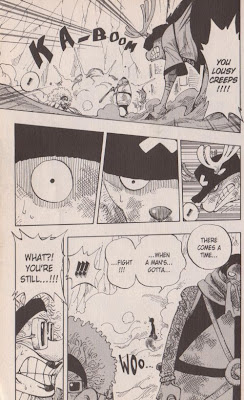 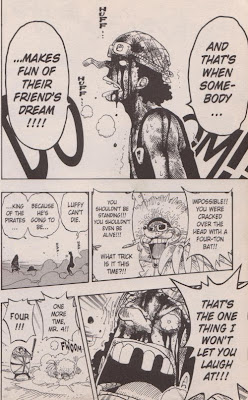 The level of destruction that characters survive in this series is often pretty hilarious, but also somewhat horrific; just look at the impact of the baseball bat that almost seems to disintegrate Usopp's body, and we even get an x-ray view of his skull being cracked. But due to the incredible levels of loyalty and determination, he stands up and keeps on fighting, even though he looks like his body has completely been wrecked. It's amazingly effective, and it gets the reader on their feet cheering for the victory that is soon to follow. I think I might have mentioned this, but this comic is awesome.
Posted by Unknown at 12:00 PM