Art What I Like: One Piece Is Awesome, Example #16

A few years ago, I read and wrote about an issue of Shonen Jump that contained the big climax of the Baroque Works storyline in Eiichiro Oda's One Piece, and I liked it well enough, but now that I've read the whole thing, I can really see what I was missing. With the full context, I can not only enjoy the amazing action, but I understand the stakes of the conflict and feel the emotional release that comes when the good guys win. And I can marvel at how Oda constructed the buildup to this climax, laying the groundwork over the course of about twelve volumes, building the relationships of the characters to make the reader care deeply about what happens to them. He sets up insurmountable obstacle and unstoppable villains, which makes us cheer wildly when our heroes manage to surmount and stop them. And after so many pages of buildup and preliminary battles, everything explodes in a final conflict, taking place across volumes 22 and 23 of the series, as Luffy fights the evil Crocodile while Princess Vivi and the rest of the Straw Hat Pirates try to stop a gigantic bomb from going off, all in the midst of a civil war that the villains have spent years fomenting behind the scenes in a plan to take over the kingdom of Alabasta as a stepping stone to eventual world conquest. The big fight to the finish lasts something like 200 pages, and it features an incredibly tense sequence involving the Straw Hats helping Vivi scale a clock tower by kicking or throwing her higher and higher in the air so she can stop the bomb at the last possible second, followed by an amazingly moving act of self-sacrifice from Pell, a royal guard who can change into a giant falcon, that Oda paces for maximum emotional effect, somehow weaving flashbacks and reactions from nearly every character into the middle of a split-second rescue, perfectly paced to leave the reader floored: 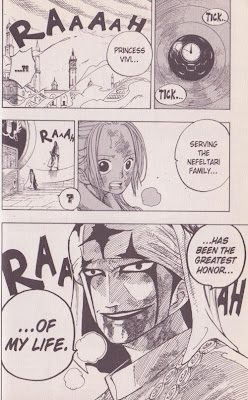 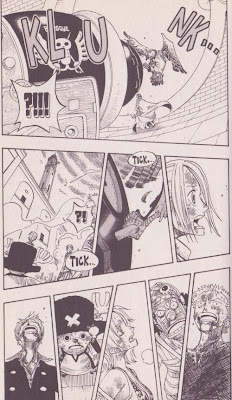 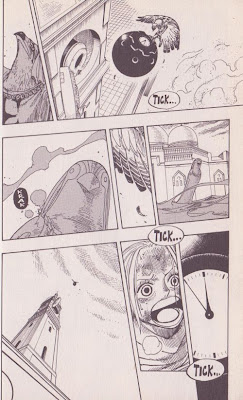 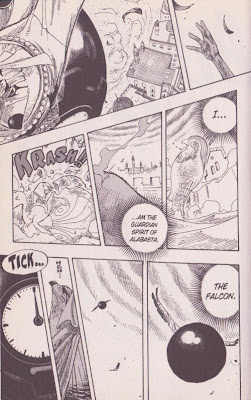 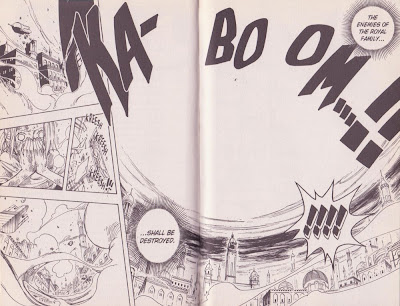 And that's not even the finale! Luffy's final battle with Crocodile builds up to an earth-shaking final moment, emphasizing the pure evil of the villain and the determination of the hero with one of those bits in which the former asks the latter how he can possibly find the will to keep fighting, and why he cares so much to risk his own life for another, which gives us a classic shonen manga declaration of friendship: 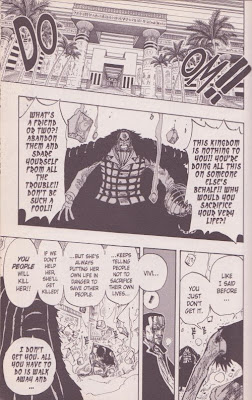 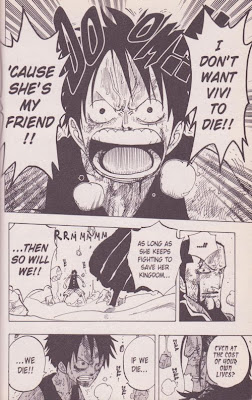 This could be corny, but with everything we know about these characters, the relationships that have been built over hundreds of pages, it's moving and emotional, a moment worthy of cheers, and it provides the certainty of an awesome triumph, a promise that Oda delivers on beyond the wildest expectations: 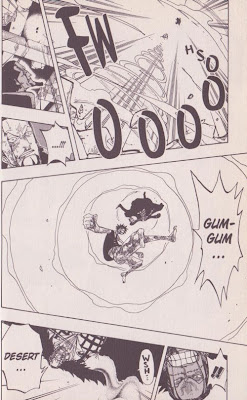 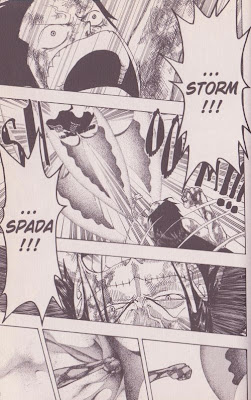 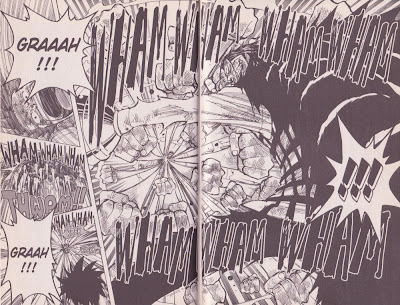 And as the perfect punctuation to the victory, we get this moment in which Vivi's father, the king, offers his thanks to Luffy: 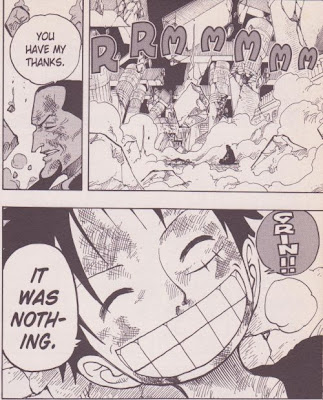 That combination of righteous determination and happy-go-lucky adventure is the basis of this series, and it's exactly what makes it so fun and satisfying to read. Now I've just got another forty or so volumes to go...
Posted by Unknown at 6:00 PM