Wonton Soup: Aside from the weird alien meat, this stuff looks tasty

So, I gots more to review, but I've gotta mention my contest a few more times. Enter! I command you! 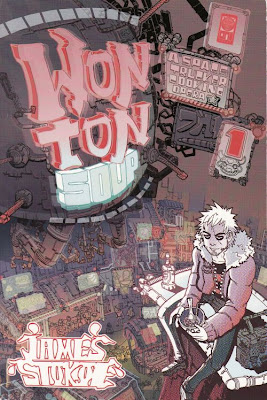 When I first cracked open this "space trucker cooking opera" (as it's referred to on the cover), I was struck by the similarity of James Stokoe's art to Brandon Graham (creator of King City and Multiple Warheads), another wildly creative artist whom I recently discovered. So it's interesting to discover that Stokoe is actually a partner of Graham's in what they call the "YOSH collective" (the third member is Corey "Sharknife" Lewis, another recognizably similar artist). It's good company to be in, and they share more than superficial similarities, with both their works sharing a go-for-broke cavalcade of bizarre sci-fi ideas and fast-moving action. Stokoe might not be quite as accomplished as Graham in my book (for instance, his female characters aren't nearly as sexy as Graham's women, but that might be on purpose; they're still pretty cute), but he still has energy to burn, and a great sense of fun to his stories.

This series (assuming Stokoe has more volumes in store) is about a guy named Johnny Boyo, a space trucker (he makes deliveries from planet to planet) who is also a cooking prodigy. He has traveled the galaxy experiencing as many tastes and styles of cuisine as possible, and when he ends up returning to his home planet and revisiting the cooking school he dropped out of, he gets a chance to show off what he has learned in an exciting battle of culinary skill. It seems like it could be a goofy cooking manga along the lines of Iron Wok Jan, but Stokoe is at least as interested in weird aliens and futuristic technology as he is in the "battle" aspect.

The plot has kind of a stream-of-consciousness quality; for almost half the book, we get to just spend time with Johnny and his partner Deacon as they travel through space and hang out at truck stops. It's only later that the plot about returning home in glory kicks in. But that's a good thing; we get to know Johnny and his world a bit better when he's holing up in a hotel room to do some high-risk food preparation (which involves a dish composed of intelligent microorganisms and a plasma oven) or battling space ninjas. Deacon is also an enjoyable character, constantly bragging about his sexual exploits with various alien prostitutes.

Later on, we learn about Johnny's past as a rebel space chef, meet his (somewhat insane) alien mentor, and watch him battle a pair of freaky alien twins in a massive cooking stadium, complete with a spastic announcer. It's a lot of fun, mostly because Stokoe depicts everything with such energy, throwing in tons of background details and coming up with some gloriously nutty dishes, cooking techniques, and alien names full of Zs and Xs.

I do really enjoy Stokoe's artwork; it's pleasantly cartoony, and he has tons of style when depicting cooking action: 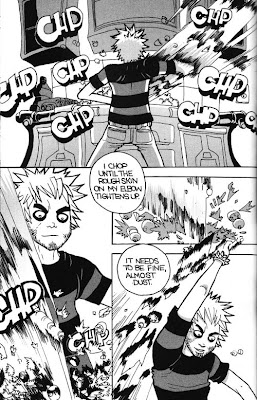 I also love his depiction of futuristic technology, from crazy cooking apparatuses to Buddha-shaped spaceships:

And the dishes, while freaky and gross-sounding, actually look like something that would be good to eat: 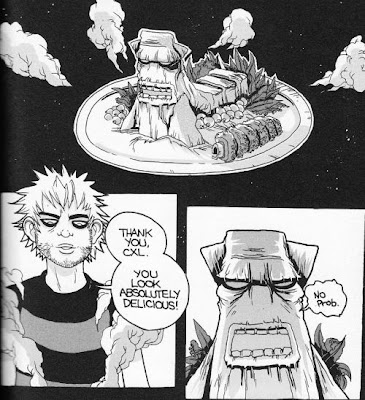 If they were real, I wouldn't mind taking a bite or two.

So it looks like Stokoe is yet another young artist to watch. It's hard to keep up with them all these days, but I'll take that over a dearth of talent any day.

This review was based on a complimentary copy provided by Oni Press.
Posted by Unknown at 3:55 PM