Brawl: I think Haspiel could take me too

Slow weekend, huh? I should have some stuff up on the soon-to-be-renamed Silver Bullet Comics and MangaLife soon though. But for now:

Brawl #1 (of 3)
By Dean Haspiel and Michel Fiffe 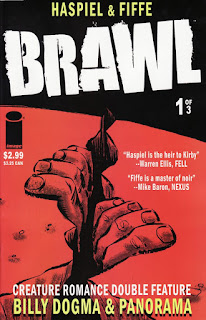 This three-issue series from Image features two serialized stories, one each from creators Dean Haspiel and Michel Fiffe. Both stories were originally serialized on the comics anthology site Act-I-Vate, and they're getting printed here. Act-I-Vate seems like a good forum for indie comics creators to get their work out there where people can read it, any maybe serve as a precursor to an eventual printing. Another Act-I-Vate contributor, Mike Cavallaro, recently published his Parade (With Fireworks), also through Image, so they certainly seem to be getting their work noticed.

Of the two contributors to Brawl, Haspiel is the more famous, having contributed art to books like The Amazing Adventures of the Escapist or The Thing: Night Falls on Yancy Street. But he's probably most recognized for his work with Harvey Pekar, providing the art for the graphic novel The Quitter and each of the four issues of Vertigo's recent American Splendor miniseries. His style is very appealing, providing an animated look to his backgrounds and characters, with a good feeling of motion.

Haspiel's story here, "Immortal", is the first in a promised trilogy featuring the character Billy Dogma (the second part, entitled "Fear, My Dear" is already being serialized online), and it's a riot. Billy and his girlfriend apparently both have super-powers, and their hard-boiled romance keeps getting interrupted by Billy being dragged off to jail. Then their love awakens some sort of monster, and havoc ensues. That would be an entertaining enough story by itself, but Haspiel gives everything a noir sort of feel, drenching them in shadows and having everyone deliver staccato-rhythmed dialogue, with bystanders joining in the narration. It's crazy, and absolutely charming. I love the tough-guy language, with lines like, "They know they can't do jack. So, they slap my writs and hold me for a night...to teach me a lesson I ain't never gonna learn." Or panels like this one: 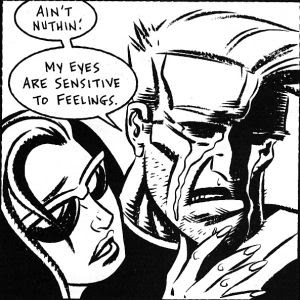 I also love the artwork, with its heavy shadows and what seems to be charcoal-drawn shading. Haspiel puts in some nice touches, like the heart-shaped holes that result when Billy is thrown through walls (which happens surprisingly regularly), or the equally heart-shaped pieces of rubble that result. I'm loving the story, and while it's over quickly, I can't wait to read future installments.

With such a strong first half, Michel Fiffe has a lot to live up to in his story, "Panorama". He doesn't quite get there, but that's no slight against him. My admittedly lax research hasn't turned up any information about him, so I assume he's not as experienced. He certainly shows some promise here, and future installments of this story might be really good.

Said story involves a young man named Augustus wandering through the back alleys of an unnamed city, getting in a fight with a gang of homeless kids, and beating the shit out of them with his freaky powers, which seem to involve his skin coming alive, stretching off his face, and doing unnatural things to people. It's pretty nasty, and the results lead him to the bathroom of a woman who lives nearby, where he goes to be sick before being confronted once again by the thugs, who seem to have had a negative reaction to his beating. It's all rather grotesque, and I'm not sure where Fiffe is going with the story, but it should be interesting to find out.

The problem here is that it's hard to tell what is going on, although I'm sure we'll find out more in future chapters. But we mostly get a barrage of nasty images that don't make a lot of sense. Unfortunately, Fiffe's characters are pretty stiff, without much life to their expressions; where he excels is the nasty depictions of Augustus' abilities: 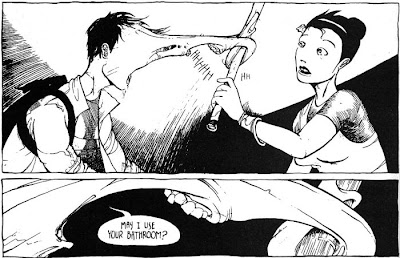 He throws a lot of detail into these images, and that's part of what makes things confusing. In this sequence, I can't tell if Augustus is puking, or if skin is stretching from the side of his mouth: 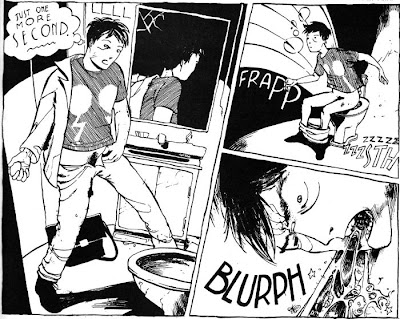 Later panels seem to indicate the former possibility, but it's still kind of vague.

But it's still an interesting story, and maybe more will be made clear in the future. Overall, I really dig the book, with it's cool presentation of stories from indie creators. I hope more stuff like this gets published, whether from Act-I-Vate or elsewhere.
----- 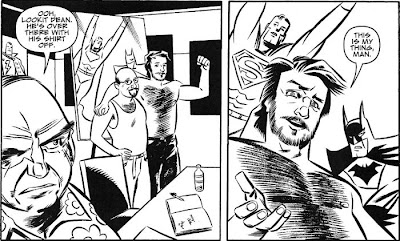