Rutu Modan will soon be a household name, mark my words!

Ah, I don't know about that, but her book Exit Wounds is excellent. Tonight, I went into Chicago to an event featuring Ms. Modan talking about her book, and it was very informative. As befits my unprofessional nature, I neglected to bring any note-taking materials, so all of the following thoughts come from my memory. Take them with as many grains of salt as you wish.

Ms. Modan definitely showed a love of comics, talking about how she got into making them herself. She's from Israel, which she said is just about the only country on earth where neither Superman nor Tintin ever became popular. So she was fairly unfamiliar with comics until she was introduced to the underground alternative comics of the 80s, like Raw. She was especially influenced by the works of Art Spiegelman and Charles Burns, and she said that after half an hour of reading these comics, she knew that was what she wanted to do with her life. She began by self-publishing anthologies along with other Israeli artists, and Exit Wounds is her first full-length book. It came about when Drawn & Quarterly approached her to write a book-length graphic novel. She was trepidatious about the idea at first, since she had previously only done shorter works, but she accepted. She had second thoughts though, because she was worried that they were expecting an Israeli Persepolis, but D&Q's publisher Chris Oliveros assured her that she could write whatever story she liked, as long as it was uniquely Israeli, and not something that could happen just anywhere (I think she certainly succeeded on that front).

She said that the inspirations for the story were a date that she went on after which the guy never called her, and she was worried that something had happened to him. Also, she had heard reports of a bombing in which one of the victims was unidentifiable, and nobody came forward to "claim" him, making her wonder what sort of person wouldn't have anybody that missed them.

When questioned about the (non)inclusion of political material in the book, she stated that while she has political opinions (as does everybody), she does not like to include them in her work, because most people's political opinions are not very interesting (she's definitely not American!). Rather, she tries to present experiences from a particular point of view, which is something interesting that everyone has.

I asked her about her influences, since she said Tintin was not popular in Israel, but her art seems to be influenced by Tintin and the European "Clear Line" style. She said that the professor who taught her about comics was Belgian, and he was from that school of art, and it was also the style that fit her best. But since comics don't have much of a history in Israel, it was remarkably freeing for her to be able to choose any direction in which to develop.

After the question-and-answer session, she stayed to sign books for people, breaking out her art materials. She did a nice sketch in my copy, with paints and everything, but my scanner is acting up, so I can't show it off right now. I might update tomorrow if/when I get it working.

UPDATE: I finally got around to scanning it: 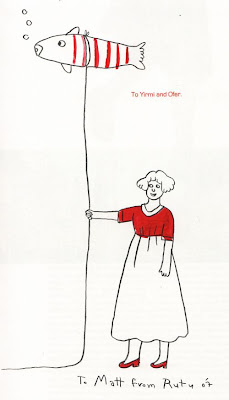 I also took a few pictures. Here she is sketching in a book:

And since somebody offered to take my picture with her, I sat opposite her and pretended to be the interviewer:

I'm such a weirdo.

So that was the event. It was a good time, and I'm glad I made the trek into the city for it. I just finished reading Exit Wounds today, so I hope to have a review up tomorrow. Watch for it!
Posted by Unknown at 9:55 PM