Last of the Independents: I sure hope it's not

I.e., I hope it's not the last "independent" comic by Matt Fraction. Anyway: 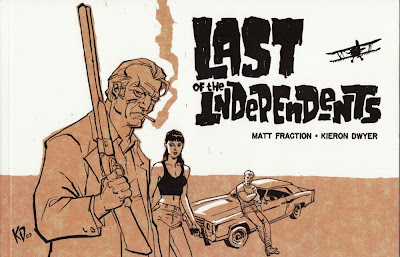 With this graphic novel, which came out a few years ago from AiT/PlanetLar, Matt Fraction proved that he's got more in him than zany science fiction stories (well, I think Casanova proves that already, since while it's crazy, it has a lot of heart, but that's beside the point). Here, he teams with Kieron Dwyer to give us a Sam Peckinpah/Sergio Leone-styled action/crime story (he thanks both of them, along with other role models, in the acknowledgments) about a bank robbery with unintended (and violent) consequences.

The heist is masterminded by Cole, a character cast in the Clint Eastwood or Charles Bronson mold as a middle-aged badass looking to make a big score and settle down. Joining him are his girlfriend Justine (or "Juicy") and Billy, a big man-child who isn't too bright but has a way with mechanical stuff (especially explosives). It seems like a "routine" robbery, but they get more than they bargained for when they find a huge amount of cash in the bank's vault; this was the spoils of a money-laundering job perpetrated by some gangsters who own a Las Vegas casino. Soon enough, scores of mafia goons are descending on Cole's small theme park, which shares a name with the book itself. Lots of action, violence, and gore result, in good crime-movie fashion. It's a satisfying ride, with some incredible action scenes involving horses, shotguns, planes, gasoline, dynamite, and plenty of swearing.

It's really nicely done, with well-drawn characters and nice, sepia-toned art. Fraction includes plenty of little touches, like Cole and Justine's relationship, or Billy's love of words (he insists on calling the place they ditch their car the "rendezvous", even though they're not meeting anybody). The matter-of-fact captions are great, introducing or underlining scenes with simple statements like "Cole and Justine in love" or "Justine thinks about meeting Cole". It's all part of the effective presentation of the gritty atmosphere.

There are some great action scenes too, with Dwyer providing dynamic layouts, like this page from a horse/car chase: 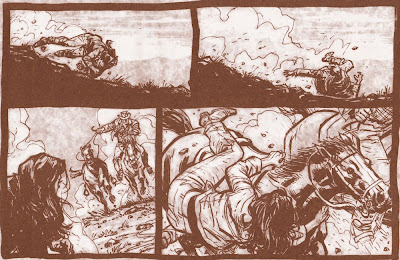 That lower-right panel, of Justine swinging up onto her horse, is wonderful. Dwyer knew the exact moment to capture for the maximum feeling of motion and speed. The whole book is like this, and the non-action scenes are just as dynamic, with faces that convey the characters' personalities as much as the dialogue does: 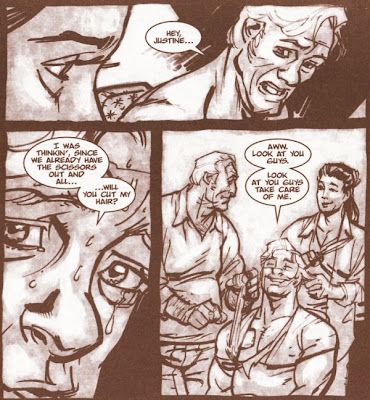 Bonus! Tangents and speculation about symbolism and stuff [with SPOILERS]:

One thing that struck me about the book was some of what seemed like symbolism for the comics industry. The book's title, for one thing, seems like it might be referring to its publisher, a well-known independent purveyor of comics. Larry Young has a bit of a reputation as a maverick publisher, so he seems somewhat analogous to Cole. Billy is good at mechanics and explosives, like the mainstream superhero publishers, with their slick production values and violent stories, but he's not too smart. He remarks that his favorite place is the corporate theme park that put Cole's establishment out of business, and he wants to use his share of the money to buy it and have it all for himself. Maybe he's a self-critical analogue of Fraction, who likes words, is good at constructing a story, and wants to work on the big icons of comics. Of course, at the end, Billy dies, and the "corporate" mafia thugs are all defeated, so maybe that's a triumph of the independent over the mainstream. Despite the title, this book and this company are far from the end of independent comics.

Or maybe I'm just reading too much into it. I've been known to do that too.

Thanks to Larry Young for the complimentary copy.
Posted by Unknown at 4:00 PM