Eduardo Risso's Tales of Terror: I didn't find this all that scary--wait, what was that?!? AAAAAAAHHH!!!

I guess this is the closest I get to a Halloween special here. Thanks, folks, tip your waitress.

Quickly: my review of the second volume of Kurohime is up at MangaLife. Enjoy, but stay here for the scary stuff (unless you're really freaked out by boobsocks, in which case you should go over there). 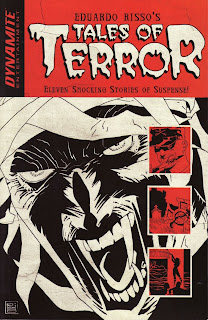 Eduardo Risso is best known in the United States for his work illustrating Vertigo's 100 Bullets, but he has had quite a career in Europe and his native Argentina. This volume collects eleven short stories, all written by Risso's frequent collaborator Carlos Trillo. While the anthology has a "horror" theme, the stories cover a variety of lurid subjects, from gangland murder to ghosts and monsters to crime and revenge. They seem to be inspired by the EC Comics stories, often featuring an ironic twist or revelation. It makes for an interesting tapestry of death and despair, tied together with Risso's excellent shadow-filled artwork.

Really, that art is the big selling point here; he's the one with his name on the cover of the book. If he wasn't involved, the book probably wouldn't have a chance of being published in the U.S. But I for one am glad to get a sampling of a favorite artist's foreign work. And it's exquisite stuff, full of violence and gore, convincingly acted out by unique characters in Risso's unique style. Whether he's depicting action through the point of view of the characters:

Shocking us with scenes of brutality: 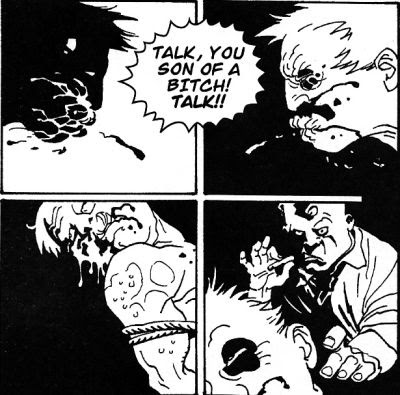 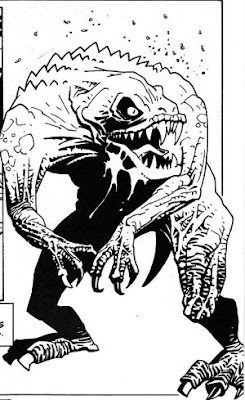 Using shadows, silhouettes, and negative space to define a the mood of the environment: 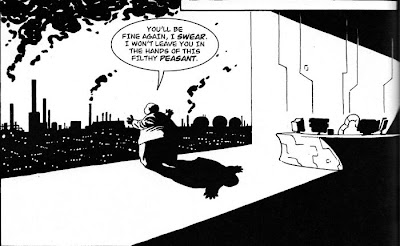 Exaggerating characters in a humorous (or scary) manner:

Or just plain blowing my mind with his abilities to convey information so simply: 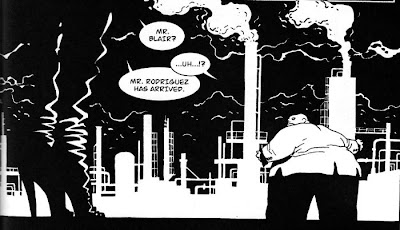 That panel just amazes me, the way Risso defines the woman's legs using only some zig-zag lines, but still making them look sexy. Wow. I'm calling it my current favorite panel.

Of all the stories, I think my favorites are the ones involving monsters, like a swamp creature or a mummy, or even Frankenstein's famous creation. There are a couple duds, but they're never uninteresting, simply due to the amazing visuals. Dynamite's printing is nice, although the paper is a bit too shiny; something closer to newsprint would have emphasized the pulp atmosphere. And, for some reason, no titles are listed for any of the stories, even though they each have a title page with a "chapter number". That was weird, and annoying, since I would have liked to look up information about when and where they were originally published.

But any complaints are minor; overall, this is an excellent book for fans of Risso's work, or for people who like these sorts of stories. If it sounds like your type of thing, I encourage you to check it out.
Posted by Unknown at 9:22 PM