Before I get started on this, I wanted to announce that I've been asked to write reviews (and possibly other content) for IndiePulp.com, a site that's based right here in Chicago. I'm pretty stoked about it, since they're some really cool guys, and they've got a lot of exciting ideas and plans for future content. I'll be doing original stuff for them, but they've also asked to repost some of the reviews I've done here, starting with my review of Killing Girl #2, which went up there yesterday. I'll have more up over there soon! But for now: 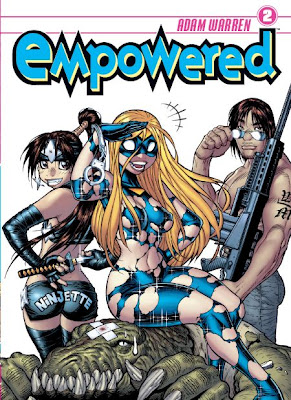 I really dug the first volume of this manga-style graphic novel series; I thought it was a good look at a character with realistic self-esteem issues and a mature sexual relationship. Plus, good art, cool action, and plenty of funny jokes. It was fascinating to see Adam Warren build a character, supporting cast, and whole universe from what began as a series of bondage-themed pinup drawings. I was pretty excited for future volumes, wanting to see more of this story that he was telling. So now that it's here, does it live up to expectations? Well, yes and no. The second volume delivers more silly jokes, plenty of action, and lots of near-nudity, but seems to limit the character development, choosing to hint at future subplots involving supporting characters rather than focus on the titular heroine and her continued growth.

Part of the problem here might be the length of the stories. The first volume had a barrage of short tales, many only a few pages long. While the ones early in the book served mostly as jokes about Emp being easily defeated and tied up provocatively, they eventually gave way to stories about her taking strength from the encouragement of her boyfriend, Thugboy, and her best friend, Ninjette. Here, we get a few shorter stories about topics like Emp being embarrassed by a video of her looking stupid in a fight, Ninjette playing video games, or Emp going undercover as a sexy librarian to capture a supervillain. There are also some longer stories, including one about Emp making her rival superheroine Sistah Spooky jealous by being "the Aryan ideal of shoulder-candy". And it's nice to see some bits where Emp seems to be gaining experience and using her abilities to actually win some battles.

But the largest section of the book is taken up by a chronological series of stories, starting with one in which Emp is so despondent after being defeated that she contemplates quitting the superhero game. Help comes from an unlikely place when the Caged Demonwolf (a supervillain that she defeated in the first volume who now resides in a containment belt on her coffee table) talks some self-esteem into her, tough-love style. It's a pretty amusing bit, with plenty of his verbose dialogue: 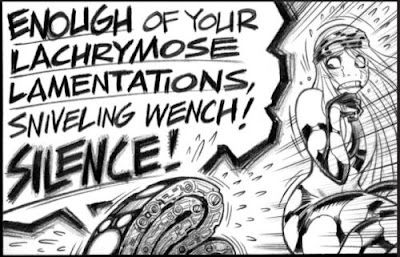 That leads into a story in which Ninjette impersonates Empowered in order to go beat the shit out of the villains that humiliated her, not realizing that this might cause her more danger in the future if bad guys view her as a deadly threat. Then, we get two stories in which the Demonwolf interrogates Ninjette about her personal grooming habits (which become obvious when she wears Emp's costume) and Thugboy about his and Emp's sex life. While this was all amusing, by this point, I was ready to move on and see more superheroics, or at least something involving the main character directly. It's not a terrible series of stories, and it does give a hint that Emp's unreliable powers might sprout from her fragile self-esteem, indicating that with more confidence, she might be able to master her abilities and become a true force to be reckoned with in the future. There's also a hell of a fight scene during the bit when Ninjette decides to go kick some ass: 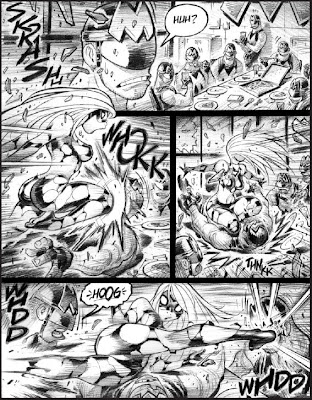 But I shouldn't make it sound like this was a complete disappointment. In fact, it was really only a minor one; I liked the volume quite a bit, but it fell slightly short of expectations (which were probably too lofty anyway). There's still some excellent stuff here, including hints at future plots coming from Ninjette and Thugboy's troubled pasts. There are also a few really good character moments, like the final story, which features Emp performing a real, satisfying act of heroism. Adam Warren's wacky humor and endless stream of ideas are intact, and his art is mindblowingly good, full of dynamic, exciting action; perfectly-realized expressions; and just plain fun designs. And I'm still happy to see a realistically-portrayed relationship, with scenes like this: 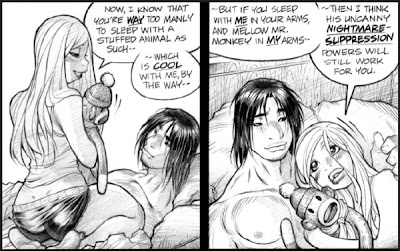 I can't get get enough of Adam Warren's comics; I wish the wait wasn't so long between volumes. Here's hoping the plot/character progression picks up a bit in the next installment. I'll be waiting eagerly to find out. 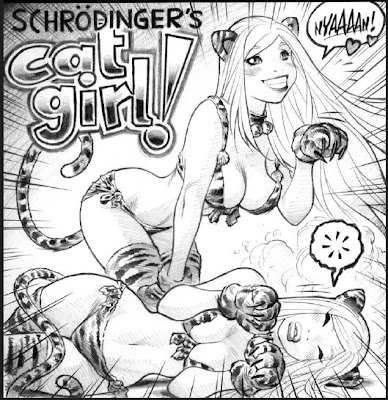