I've sort of got my scanner working, so I can finally get to reviews like this one that involve lots of scanning. Whew! First, external reviews: over at SBC, I did an early review of Snaked #1, a new horror-type book from IDW that comes out in December; and at IndiePulp, I looked at Jeffrey Brown's The Incredible Change-Bots, which was pretty fun.

Random comics thing: my wife watches Beauty and the Geek, and I occasionally join her if I'm not doing anything else. It's not usually worth talking about, but tonight's episode had the "beauties" and "geeks" creating superhero personas, designing costumes, and presenting them at the San Diego Comicon to some comics creators. The interesting thing is, those creators were Eric Powell and Dwight T. Albatross of The Goon, Brian Lynch of some Angel comics, and Chris Ryall of IDW Publishing. The funny thing is, none of those creators are known for working on superhero properties (I know, Powell has done some Superman, and maybe some other stuff, but he's known for The Goon). Weird. Feel free to discuss this among yourselves. 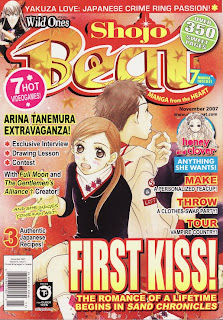 This issue sees more of the same stuff from the ongoing series, and what seems to be becoming a standard monthly feature: the first chapter of an upcoming series. This preview is an interesting one, so I'll start with that:

Wild Ones
By Kiyo Fujiwara

This series is notable (to me, at least) for combining what seem to be two incompatible genres: shojo romance and yakuza (gangster) stories. The main character, Sachie, is taken in by her grandfather after being orphaned, and it turns out that he's a yakuza leader, with a group of roughnecks living in the house and apparently running organized crime schemes all the time. While this seems like a serious subject, it's mostly played for laughs (so far), with the gangsters acting as a sort of Greek chorus and providing goofy background gags when they try to protect Sachie from harm. The main romantic plot looks like it will be coming from Rakuto, a handsome young gangster who gets assigned as Sachie's bodyguard. There's some standard drama about how other students at school view their relationship, and other wacky goings-on involving a guy trying to put the moves on Sachie and getting the crap scared out of him by her gangster buddies; it makes for an interesting setup. Most yakuza stories (judging from movies I've seen; I haven't really read any yakuza-based manga) tend to be about honor, focusing on the macho aspects of organized crime; it might be interesting to get a look at the lifestyle from the viewpoint of a young girl that is more involved than she wants to be. Of course, the series will probably just focus on romantic silliness, but it has the potential to be pretty interesting.

Oh, I should probably say something about the art. It's perfectly appealing, with little to distinguish it from any other shojo manga series. Nothing too flashy, but it gets the job done. I guess that's all I have to say.

There's lots of big, emotional stuff in this chapter, with Yuki making a deal with the devil in order to save Zero. But can she sacrifice Kaname, and maybe become a vampire herself to do it? Whatever; I say get on with it already. It's all buildup, with the evil Maria Kurenai/Shizuka Hio plotting and manipulating in the midst of the senior prom (or its vampire equivalent). Oddly, the best moment of the chapter probably comes when a shy girl approaches Zero and asks him for a dance, only to get the brush-off. It's a cute little bit that stands out in the midst of all the angst and drama. Oh well, maybe the plot will pick up next month.

As the series nears its end (hopefully; I'm not sure how much longer it's supposed to last), Watase actually seems to go in the direction I was hoping last month, at least at first. Kronos Heaven is still trying to get Night back, so they send a series of robots to apprehend him in increasingly goofy fashion. Watase is quite skilled at comedy, and she uses a hilarious technique here, with Night being threatened on one page: 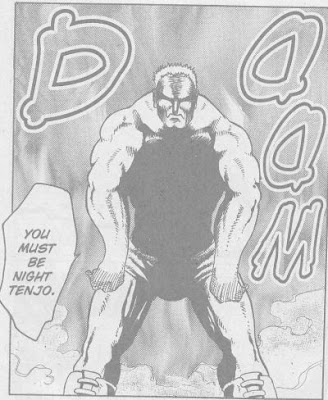 Turning to the next page reveals the threatening robot lying in a heap, having been defeated while the page was being flipped: 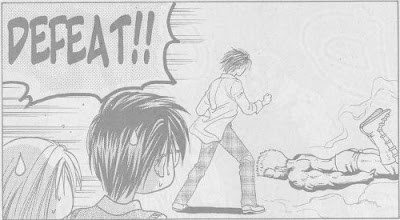 This gag is used more than once, and it just keeps getting funnier.

In other goings-on, Riiko finally chooses between Night and Soshi (hint: one of them recently displayed a lot of valor and bravery, so who is the obvious choice?), and the reason for Night's malfunctions is revealed: without his ring that tells him what emotion Riiko is feeling, he can't process her signals and overheats. That makes for a strange status quo. We'll see how the series goes after this point, but the best one can hope for is probably a few laughs before the end (which, rumor has it, is quite unsatisfying).

Well, my hopes about Nobara's unorthodox training don't exactly pay off here, but there's potential for wackiness in the future. She's been sent to Central Sokai University to learn how to be a great attacker, but when she gets there, she finds that the school's team isn't interested in her; instead, she's going to be trained by Ryo, a womanizing beach bum who got cut from the squad for being too short. It's all about triumphing against expectations, in true sports-movie fashion. We've all seen it before, but it's presented enjoyably enough here. The twist is that Ryo will be teaching Nobara to play volleyball on sand, with the help of his team of goofy misfits that include a couple other surfer dudes, a straight-laced accountant type, and a flamboyantly gay wacko who gives Ryo kisses and comments on Nobara's flat chest. I'm not so sure about where this is going, but who knows, maybe Takanashi will manage to make it entertaining. At worst, the training story should only last a few chapters before Nobara can get back to the team and lead them to victory in what will hopefully be some tense, exciting games. And maybe angst about Yushin, the boy she has a crush on; this wouldn't be much of a shojo series without that sort of thing. Ah well, it should continue to be readable.

Oh boy, this series is going to be hard to bear each month. It's a tiresome bunch of fantasy clichés ripped straight from a generic Japanese role-playing video game (fitting, since it's based on such a game). This chapter actually introduces some intriguing concepts into the mix, but I doubt they will be used in any interesting manner. Namely, our heroine Akane seems to be caught between two factions: the humans and the demons. The humans seem like the good side, but they appear to discriminate against the demons because they look different (racism!); that is, they have different-colored hair and eyes than the humans. On the other hand, the demon lord who summoned her into the past is caught up in judging people by what clan they were born in (classism!). Plus, he seems very sinister, so he's almost surely the bad guy. In any case, the whole thing seems pretty incoherent and pointless, with a plot that makes little sense and art that is hard to follow. Here's an example; in this sequence, what is the point of the flower-filled panel gutters, other than to look pretty? 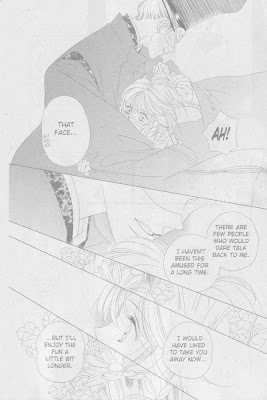 I know flowers and other pretty imagery are something that show up as a mood-setter in shojo manga, but they don't seem appropriate here at all.

Maybe this series will eventually cohere into something readable and engaging, but it seems to be spinning its wheels defining an uninteresting world so far. I'll keep reading as long as it's included in Shojo Beat, but I expect to complain fruitlessly as long as it runs. Take that!

Have I mentioned that this series is awesome? Because it is. At this point, the series is still concerning itself with humorous character-defining stories, and that's fine with me. The heavy emotional stuff can wait until later. The two chapters in this issue see the gang going on a picnic with Professor Hanamoto and Hagu-chan, with predictably wacky results. Actually, the interesting thing is that the wackiness is pretty low-key and less over-the-top than one would usually see in manga stories. It's mostly limited to Hagu falling into the water and borrowing Takemoto's shirt (which looks like a dress on her) and Morita setting off all their fireworks at once.

In the second chapter, Takemoto has dinner with Hanamoto and Hagu, and he and Hagu share a bonding experience when she shows him her dolls and the clothes she made for them. It's pretty cute, especially his reaction when he volunteers to build a wardrobe for her doll clothes and she insists on a rococo, Versailles-style construction. It's all really charming stuff, with cute, expressive art and some great comedy that comes from the oversized reactions that everyone has to each other. Good times; I'm always excited to read a new chapter of this series, and so far it hasn't disappointed.

Oh, the drama. Drama, drama, drama. That's the main thrust of this series, but luckily, Hinako Ashihara knows how to deliver it effectively and when to let up and throw in some humor. This chapter sees Ann and her friends at the summer camp where we left off last month. The drama here comes from the mean girl who tormented Ann before; this time she steals Ann's precious hourglass and sends her off on a wild goose chase in the forest at night, in the middle of a big thunderstorm. Can Daigo and Fuji find her before it's too late? It's a pretty exciting finish, but Ashihara tops it off with a somewhat humorous resolution that provides a nice relief to a dilemma set up in the last chapter; it seems perfectly formulated, like a mathematical equation resolving just right. In the end, it leads to a nice, sweet moment (which is spoiled by the cover of the issue), putting a nice cap on a good story. Ashihara certainly knows what she's doing here, and she does it really well. She also delivers some really pretty artwork, like this scene of Ann and Fuji looking at fireflies: 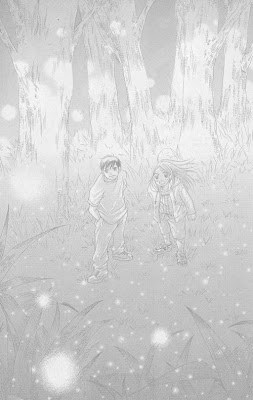 That's some beautiful stuff. I really can't recommend this series enough; it's better than I could have hoped for when it started.
-----

And that's all for this month. I didn't post as many images as usual, mostly because I didn't think there were many images that grabbed me. Or maybe I just didn't feel like it. Anyway, more next month!
Posted by Unknown at 10:03 PM