Has he come to save the world...or destroy it? 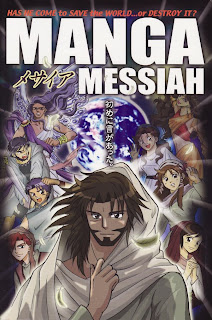 My latest review is up over at MangaLife, and it's a look at the book above, an attempt by Christian publisher Tyndale to enter the manga market. It was an odd book, so I figured I would share some thoughts that I wasn't able to squeeze into the review. Think of this as the appendix or something:
And I think that's enough blabbering from me about this subject. Check out the review, if you haven't already, and I suppose you could check out the book if you want, but unless you're Christian or really curious about manga in color, it's probably not worth your while.
----

By the way, you might have noticed this already, but I've decided to start going by my full name in order to better distinguish myself from Newsarama's Matt Brady. So it's Matthew J. Brady from now on. Ha!
Posted by Unknown at 9:20 PM