Man, I haven't been updating much this week, have I? Less to write about, I guess, although I've managed to finish several things, and I've got plenty more on the "to read" pile, so expect a veritable flood of content. Like this:

(I suppose I should warn that there are some SPOILERS here, since I summarize the story, but hopefully it won't ruin the book for anybody) 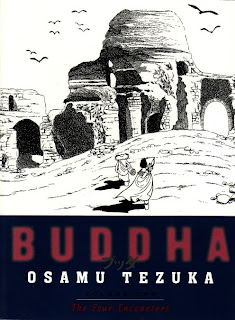 In this volume, Osamu Tezuka starts to get into the life of his titular character, revealing the first installment to be setup, showing the beginnings of some of the characters and introducing the political landscape to set the stage for the main tale. There's plenty of setup here also, with hints at events to come and characters that will play important roles, but the volume is mostly focused on the early years and young adulthood of Siddhartha, would would become the great religious figure.

He has a long way to go to get to that point though; when we first see him, he's a morose ten-year-old prince, uninterested in the naked dancing girls in his personal playroom and prone to asking tough questions of his teachers. He rails against the class system, not understanding why he is so privileged while others suffer. He also becomes fascinated by death, wondering what happens when living things die. Some of these questions are answered by a wandering holy man, although these answers seem to raise more questions. The holy man also reveals that Siddhartha has psychic powers, giving Tezuka a chance to deploy the trippy visuals he loves so much: 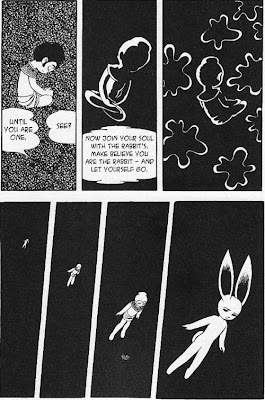 Jump forward in time a few years, and Siddhartha is even more tired of his pointless life. He's not interested in the political trappings of his father's country, and he feels cut off from the real world, sheltered in a palace. So he runs away, hooking up with the vagabond Tatta from the first volume, who is now all grown up, wandering the countryside and fending for himself. He's the one with the powers to possess animals, and he often uses the ability to hunt. They set off on a journey down the river, picking up a third traveler, a young woman named Migaila. Sure enough, she and Siddhartha fall in love, but Siddhartha can't handle the brutality of the outside world. After seeing too many horrible scenes, he returns to the palace.

Siddhartha's father is none too happy about his son's "vacation", and he decides to conspire to keep him tied down by marrying him off to Yashodara, a princess from a nearby kingdom. Siddhartha isn't interested, since he loves someone else, but he can never be with Migaila because they are from different social classes. So he invokes a tradition in which any warrior can challenge him, with the winner getting to marry the princess. Bandaka, the dead-eyed evil guy from the first volume, returns to try, and so does Migaila, in a plan to defeat the prince, reveal herself as a woman, and show the ridiculousness of the contest and the arranged marriage. As you can probably imagine in a story like this, the scheme doesn't go well, serving only to permanently separate Siddhartha and Migaila, give Bandaka a grudge against the kingdom and a lust for power, and ensure that Siddhartha gets married to Yashodara.

This all makes life more miserable for Siddhartha, and he begins to plan to run away and become a monk, fulfilling the destiny that the old holy man predicted for him. But unfortunately, Yashodara gets pregnant, making him feel like he should stay, and he feels obligated to try to lead the people, since they are feeling political and military pressure from the nearby Kosala, a much more powerful kingdom. He ends up spending all his time meditating, which drives his father and all the kingdom's officials crazy. They concoct various schemes to try to get him to stop, but this only solidifies his resolve, making him sure that his rightful place in the world is as a holy man, not a king.

Eventually, he can't stand it any more, and he leaves, escaping his father's attempts to keep him confined. This makes him kind of a deadbeat dad, but I guess those human concerns are beneath someone like him. It is a bit offputting though. That's the end of his story for this volume, and I'm sure we'll get to see his enlightenment and the eventual creation of Buddhism. But that will have to wait for future volumes. This volume sees several other peripheral events occur, including the formation of a lower-caste resistance by Tatta and Migaila and their meeting with Naradatta, the animalistic monk from the first volume; the story of King Prasenajit, the ruler of Kosala, and his attempt to produce an heir; and Bandaka's brief stint as the ruler of Kapilavastu, his rejection by Yashodara, the birth of his son, Devadatta, and his eventual fate. All these threads will surely have real significance in the future; it's amazing to watch Tezuka build this large, expansive cast.

He still keeps the story entertaining though, with plenty of action and intrigue, and lots of slapstick humor. There is quite a bit less breaking of the fourth wall this time around; metafictional jokes seem to be limited to occasional references to modern technology (when a character has a nightmare, somebody tells her she has been watching too many sci-fi and horror movies). In fact, there is a bit less humor in general; instead, the focus seems to be on the drama of the story. But that's okay, it's an amazing tale, and Tezuka delivers it like nobody else could.

His art is as incredible as always, with dynamic page layouts and fluid, cartoony figures that really sell the drama and emotion of their situations. In the first volume, there were lots of scenes of animals, but there are not as many here; instead, the focus seems to be nature, with gorgeous splashes of lush greenery: 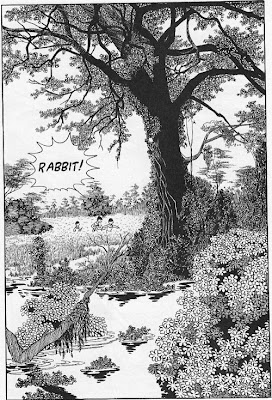 Even though the art is black and white, these pages seem colorful and full of life: 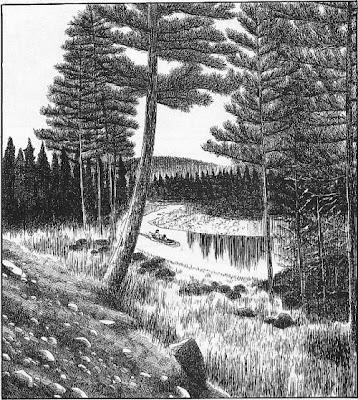 And don't forget the beautiful landscapes: 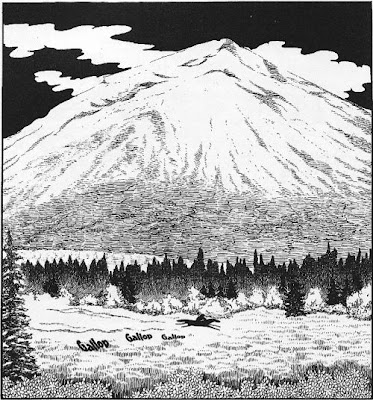 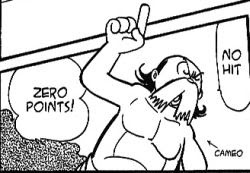 More tomorrow? I hope so! And I should probably have some stuff up at Silver Bullet Comics soon.
Posted by Unknown at 10:32 PM