MPD Psycho: A world like this would make anyone psychotic

Quickly: Over at IndiePulp, I've got a review of Jeremy Tinder's Black Ghost Apple Factory. Also, a repost of my look at Good As Lily. But for now, let's look at some good old Japanese weirdness: 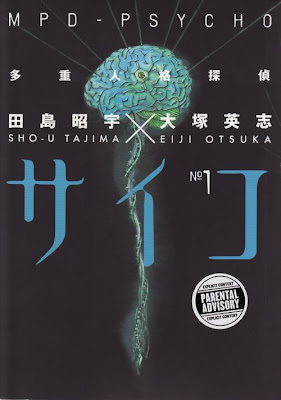 Of course, all the nasty imagery in the world amounts to nothing if there isn't a story to string it together, so how well does MPD Psycho accomplish that? I would say pretty well, although it takes a while to get started. In the first few chronologically fractured chapters, we are introduced to our protagonist, Yosuke Kobayashi. He is a violent crimes investigator, and seemingly very good at profiling criminals. However, he also suffers from Dissociative Identity Disorder (also known as Multiple Personality Disorder, the "MPD" of the title), and at least one of his personalities has a murderous attitude. This affliction leads to him being thrown in jail, and after he gets out, a former police detective recruits him to work in a private crime lab, solving the violent murders that continue to plague the city. Oh, and his previous identity has been suppressed, so now he's going by the name Kazuhiko Amamiya.

It's an interesting setup, and it leads to some pretty arresting stories, with Amamiya and his crew (which includes the woman who bailed him out, and eyepatch-wearing reporter, and an incompetent, comic-relief-providing police detective) getting involved in investigations of disgusting murders and him using his skills to find the culprits. There are also some hints at a conspiracy of some sort, since all the killers are discovered to be clients of an eye bank, and they all have a barcode somehow printed on their left eyeball. And we get some tension about Amamiya; how stable is he, and what happens if (when?) a murderous personality takes over? These questions are left for future volumes to answer, a good reason to keep reading the series.

Shou-U Tajima's artwork does a great job of delivering the gory details of Otsuka's script; every severed limb or arterial spray is rendered in horrific detail: 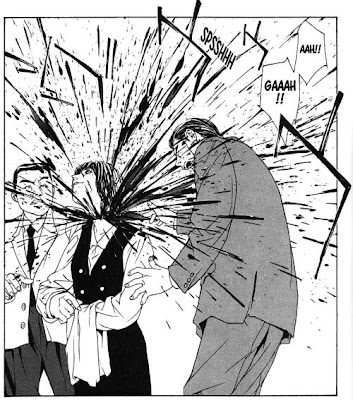 But he also captures some good nuances of facial details, making obvious the shifts in personality that Kobayashi/Amamiya/? experiences. It's some nice work, although his mind is probably permanently warped after slaving over these gruesome images for so long.

So, it's a good book, if you've got the stomach for it. I'll be ready to see what horrors Otsuka and Tajima can deliver in future volumes. I just hope I don't end up ruining any books with projectile vomit.
Posted by Unknown at 5:06 PM