Potter's Field: I feel like I missed most of the season

Hey, new review below! But first, I've got reviews of The Umbrella Academy: Apocalypse Suite #2 and The Programme #4 up over at Silver Bullet. Enjoy! 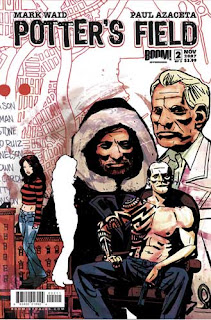 When I looked at the first issue of Potter's Field, I likened it to a TV series, similar to police/crime procedurals like CSI or Cold Case. Well, if that issue was the pilot episode of the series, this second installment is like the first part of a two-part season finale. It works okay, but it might have been better if we had had several interstitial episodes to get the audience used to the concept, and maybe introduce some recurring characters other than the protagonist. Maybe Mark Waid and Boom! are testing the waters to see if a series like this will sell, but I would think it would have more appeal if the stories had room to breathe, setting up a status quo so readers will be more shocked when it is disrupted.

That said, it's still a pretty good episode, with John Doe going about one of his usual investigations, only to get caught up in the manipulations of organized criminals. Waid does a good job of keeping readers guessing as to what will happen, with the machinations of the plot falling into place quite satisfyingly and still ending on a cliffhanger that leaves one eagerly awaiting the resolution in the final issue.

Paul Azaceta continues to deliver a gritty atmosphere, defining his characters very well and contributing a dynamic action sequence. I still really like the "action lines" he uses to show movements or reactions; they stand out starkly against the more realistic images, adding a unique feel to the art. It's a nice package; really, my only complaint is that it isn't a longer series. Maybe Waid and company will continue with a sequel if it sells well; I think comics could use more variation in the material that is published, and the crime genre seems quite natural. Now the publishers just need to get this into the hands of people that will like it...

This review was based on a complimentary electronic review copy provided by the publisher.
Posted by Unknown at 7:31 PM