Exit Wounds: I guess this is Rutu Modan week

Before I get started with the review, I'll point out my review of Angel Skin, which is up at Silver Bullet Comics. It's not a book that I can really recommend, but it's interesting. Read the review to see what I mean. Okay, on with the show: 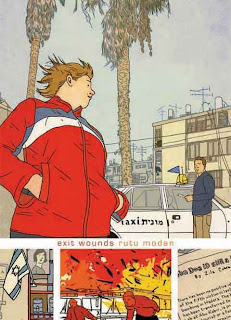 Rutu Modan's new book is a fascinating look at life in modern-day Israel, but rather than focus on the big political picture, it's a story about people and relationships, illustrated in a sumptuously colorful Tintin-esque style. The main character of the story is Koby, a taxi driver in his twenties who is approached by a young woman named Numi who knew his father and wants Koby's help identifying what might be his body. A recent bus station suicide bombing left a corpse that could not be identified, and she thinks it might be Gabriel (Koby's father). It quickly becomes clear that Koby does (did?) not have a good relationship with Gabriel, since the latter was something of a deadbeat, walking out on his family and rarely staying in touch with them.

Koby is reluctant to help at first, since he doesn't really believe his father is dead, but Numi drags him along, slowly getting him more interested in the search. And while the mystery is compelling, it gives way to a study of these two characters and their attempt to connect with each other. Koby seems to try to cut himself off from others (although he feels obligated to take care of his aunt and uncle) in order to avoid being abandoned again. Numi, on the other hand, seems to have trouble in relationships because she is not good-looking in the conventional sense. We learn that her family is rich, and her mother and sister are both pretty and glamorous, so she feels inferior to them and possibly ashamed of her upper-class background. She had a romantic relationship with Gabriel, a much older man, and she's trying to get some sense of closure after losing him.

It's fascinating watching these characters try to form a relationship, and a big part of that is Modan's deceptively simple artwork. The characters are drawn in the Franco-Belgian "Clear Line" style, with little definition to their features other than dots for eyes and the outlines of their nose and mouth. But Modan makes great use of these parts, assembling them into affecting, emotional displays that seem completely natural. And the body language is also really, really well done; whenever Koby frustratedly lights a cigarette, I almost forget that I'm looking at a drawing. But she also uses some really nice impressionistic techniques as well, especially in a scene of Koby and Numi swimming, where splashes of water become splotches of blue color pouring across the page.

Backgrounds are also very nicely done. They are often drab-looking, with simple grey filled with a dark, monochromatic color scheme; this technique pushes the characters to the front and emphasizes them over their environment, but upon inspection, there are a lot of nice details filling out the scenes. I especially liked the odd memorial at the site of the bombing, with photos and candles placed on a Coca-Cola shelving unit and flowers on the ground or taped to the wall of the building. As a whole, the art is really beautiful, with bright, arresting colors that define the characters and environment and don't let you look away.

I'm very impressed by the emotional punch that the story packs even though it doesn't directly engage the political conflicts of its setting. While the idea of living in a country where people aren't sure which bombing you're talking about when you mention a tragic event is so foreign to Americans, it's not these political matters that draw you in to the story; it's the characters and their relationships. Near the end of the book, there's a fantastic moment, when [SPOILERS] Koby and Numi become intimate and she jokingly compares him to his father. He freaks out, naturally, but the remarkable thing is how real the exchange feels. Numi is still coming to grips with the end of her relationship with Gabriel, and while she is growing closer to Koby, she still feels the connection to his father and doesn't want to let that go. Koby, on the other hand, is finally beginning to care about somebody after keeping people at arm's length for so long, but the last thing he wants is to be reminded of his father's actions, or face the possibility that he might do something similar [end SPOILERS].

In the end, the truth about Gabriel and his fate becomes less important than the journey to find it. Modan gives us some indelible characters that manage to connect under the most unlikely circumstances. She even succumbs to the impulse to end with a happy, romantic gesture, and I can't fault her for it. People need to be able to connect with other people, even in the harshest environments, and when we get to know such distinctive characters, we want the best for them.

So, please, read this book. It's one of the best comics works to come out this year, among many other bits of greatness. While it's Modan's first book-length graphic novel, it probably won't be her last; I can't wait to see what she delivers next.
Posted by Unknown at 9:40 PM