Killing Girl: Not as killer this time around

Another external plug, before I start this post: my review of Apollo's Song has been published on MangaLife. Oddly, the pictures in their version of the article didn't come out so well; I'll have to check and see if I need to fix the way I send images to them. 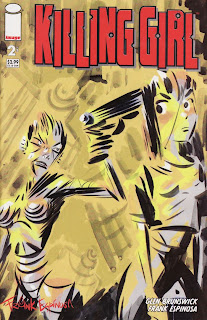 Hoo, boy. When I reviewed the first issue of this miniseries, I felt that the stunning art overcame the mediocre writing. Well, the story veers into downright bad territory in this issue, with lines like "If I told you the sky is red today then it's red," or, "No sacrifice would be too great to have her back...no matter what she's done." Ouch. But it's not just the dialogue that's lame here; the plot is pretty awful as well, with Viper/Sara unable to kill the agent she left alive last issue because he's the fiancé of her long-lost sister. Actually, Viper is the long-lost sister, kidnapped as a child by gangsters to become a prostitute/assassin. We get some flashbacks in this issue, seeing Viper's training by an ultra-butch woman named Nightmare (that's her on the cover of the comic), who threatens to kill her if she misses any shots. Anyway, Viper is ordered to kill the agent, which is an interesting conflict (should she destroy her sister's life, just as she's starting to remember her pre-criminal days?), and Nightmare is ordered to kill Viper if she hesitates. This leads to tragedy, and who knows where the plot will go for the next three issues.

Unfortunately, I don't really care. None of the characters are likable here, with the possible exception of Anna, Sara's sister. That isn't a necessity for a good story, but nothing they do really interests me; the gangsters are cartoonishly evil, and pretty much any motivation for Sara to do anything other than kill everybody she sees is removed at this point in the story. The plot really gives me no reason to follow these characters any longer.

And luckily for me, I guess, the art won't be drawing me to the book any longer either. Frank Espinosa is quitting the series, to be replaced by Toby Cypress, with whom I'm not familiar (outside of some preview art for the next few issues of this series). Seems like the perfect jumping-off point. So that's that for the series, and I can't really recommend it for anybody, unless you can't get enough of Espinosa's art. But while I'm talking about it, let's look at his art for this issue:

It's not quite as striking as the first, possibly because this is a second-act lull after the opening action of the first installment. Presumably, the next few issues would build to an awe-inspiring climax, but Espinosa won't be around to bring it to life. Too bad. But here, we mostly get characters standing around and talking, with flat, grey backgrounds and little movement: 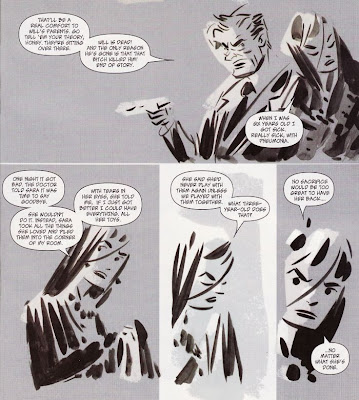 Espinosa does what he can to liven things up, but the script doesn't give him much to do. Luckily, there are a few exciting scenes to punctuate the boredom, like a flashback to Sara's kidnapping: 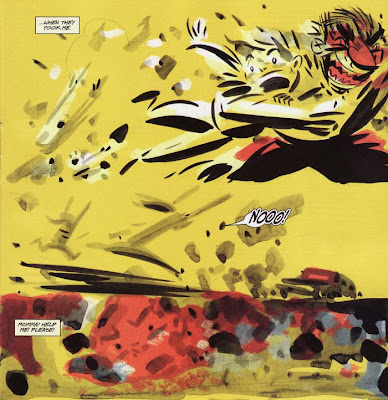 That's a really cool page, giving the scene an emotional chaos, with the demonic-looking gangster grabbing Sara and her mom and sister reduced to mere brushstrokes in their inability to do anything about it. It takes a few moments to interpret, but once you grasp what's going on, it totally works. And then there's the bit where Viper's boss/lover slaps her around:

I actually didn't like that scene at all, since it deflates Viper's hard-ass character, adding violence toward women into a comic that should be about the opposite, and it contains some atrocious dialogue, but I love the way Espinosa drew the guy slapping her. The arm is elongated, with the fingers seemingly stretched beyond recognition; it's a great way of capturing fast motion in Espinosa's minimalist style.

There's some more action near the end, but it's fairly incomprehensible, and while I've been laying most of the blame for this book on Brunswick's feet, some of it might be Espinosa's fault, like this scene [SPOILERS, I guess, but it seems silly to warn for them when I've been telling people not to buy the book] when Nightmare is about to shoot Viper from a hotel window, and she's interrupted by a maid: 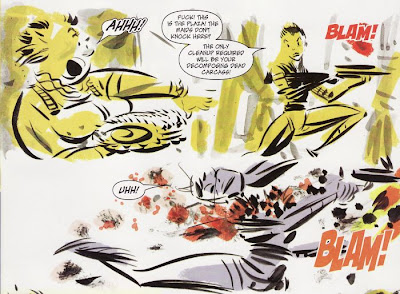 For one thing, there was no indication that the scene was taking place in a hotel; all we saw in the previous panel was Nightmare pointing a gun out the window, and then the maid appeared in the next panel. For another, Nightmare apparently still takes the shot, without looking, and manages to hit her target. Right. Third, the coloring around Nightmare's head (which had previously been shown as having short hair) indicates longer hair at first glance, and she loses her hard, perpetually angry expression at a totally inappropriate moment. I was actually confused as to whether this was Nightmare or somebody else at first glance, and that's not a good thing. I do like the second panel though; it's good to have some color on the page, and I love the splatter effect and bodily contortion caused by the impact.

Since I'm spoiling things, I'll go ahead and reveal that Anna gets killed, and Sara gets captured by the feds, so I'm guessing she'll spend the rest of the series working with Anna's agent boyfriend to take down the gangsters. And probably falling in love with him while rediscovering her lost childhood. I might have stuck with it if Espinosa was continuing on as the artist, but without his contribution, I expect this book will stop straddling the good/bad line and fall squarely into the "awful" category. Pity.
Posted by Unknown at 9:46 PM