Beautiful Killer: Like Killing Girl, but not nearly as good

My friend Franck DeVita sent me these comics, so I hope he doesn't mind the critical drubbing I'm about to give them. 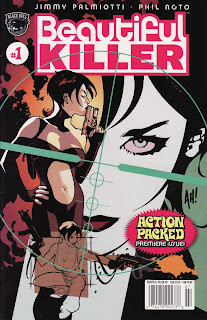 I'm sure Phil Noto was the main draw for this 2002 miniseries from the now-defunct Black Bull Entertainment (which I just found out was an imprint of Wizard magazine. Huh). Either that, or the impossible to resist the allure of Adam Hughes covers that promise action-packed tales of a sexy assassin. Who knows, maybe Jimmy Palmiotti was a big seller; I've never found his writing to be anything other than workmanlike, and it's easily the worst aspect of this particular work, dragging down what could have been an enjoyable action-movie plot with unending exposition and clunky dialogue.

The minimal plot concerns one Brigit Cole, a young girl whose parents have been killed, leading her to swear vengeance and track down their murderers. The first issue makes for a fairly promising beginning; we see her efficiently take down a spy who was revealed to have betrayed her father in flashbacks. She gets information about her next target, a beautiful Russian agent, and sets off to kill her as well, ending the issue. Unfortunately, the next two issues consist of endless flashbacks and backstory; Brigit's parents were spies, and her mother was also a scientist working on some sort of regenerative serum. When her father was injured, the evil spy corporation/government used him as a guinea pig for the serum, prompting the two of them to escape and flee to a life of hiding on a Mediterranean island, where they raised Brigit, training her in all their superspy skills so she would be able to survive come the inevitable day that their past caught up with them, etc., etc. Oh, and Brigit inherited some properties from the serum, so she's albino and has a Wolverine-like healing factor.

We get all this information in scene after scene of Brigit's parents or other people explaining things to her in word balloons that clutter up Noto's gorgeous artwork. Here's an example, in which the parents are sending Brigit to escape the island:

It's too bad; if Palmiotti had left more of this information up to the reader to interpret, the story could have been a sleek, fast-moving spy adventure. Instead, it moves at a snail's pace while we read the unwieldy text. And it's not even well-written text; the near-constant run-on sentences and lack of contractions make it sound like it was poorly translated from some other language than English.

As I mentioned, Noto's art is often very good, alternating roughly-sketched drawings with finely-detailed work. He makes really good use of painted colors: 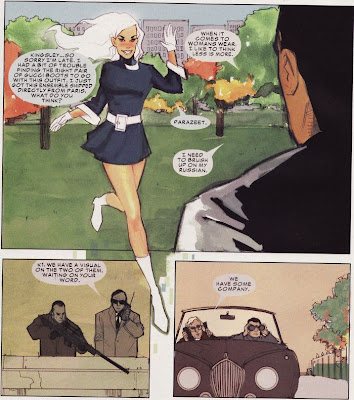 And the sense of movement is often quite dynamic, not to mention his skill in portraying pretty girls (although I could have done without the scene in which the evil Russian spy enters a boardroom meeting naked, daintily hiding her naughty bits from the reader with strands of hair). And this scene of Brigit watching the attack on her parents' island from underwater is simply breathtaking: 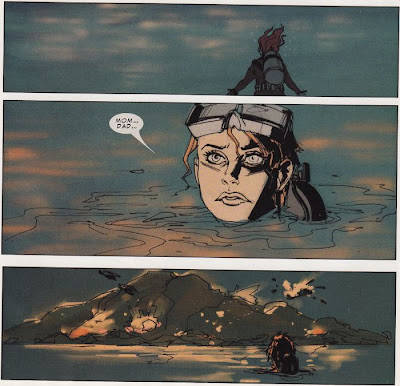 But some pretty art doesn't make up for a bad story, so I gotta give this a thumbs down. If I was going by the Savage Critics scale, it would be somewhere between Awful and Eh, probably leaning toward the former. One of these days, Noto will do something better and get recognized as a pretty damn good comics artist (I think he's intermittently working with Palmiotti on Jonah Hex at the moment), but until then he'll be stuck doing covers or whatever. Oh well.
-----

By the way, this is nothing new for regular readers, but my review of Gilbert Hernandez's Chance in Hell has been reposted on Silver Bullet Comics, so you can check it out there (or scroll down to check it out here) if you're interested.
Posted by Unknown at 5:21 PM