Potter's Field: It's not about clay 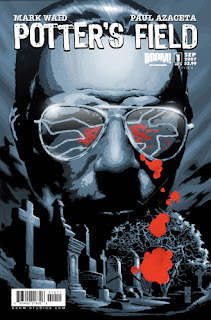 Now that Mark Waid is the editor-in-chief of Boom! Studios, it looks like he wants to branch out from the superhero stories that have been his bread and butter for so long. Potter's Field looks to be a different sort of thing for him; it's more of a gritty crime series, following the investigations of a man on a mission to discover the identities of all the unmarked graves that accumulate in New York City and are buried in the titular graveyard (which is never named in the story, but there's nothing else that "Potter's Field" could refer to). He's a mystery man with no identity other than "John Doe", and he has agents all over the city that help him out in his investigations. In fact, he does seem a little bit superhero-ish, defying attempts to discover his identity and exhibiting almost supernatural deductive powers. But it's still very street-level, in the manner of a TV series like Law & Order or Cold Case. This issue is mostly introduction, but Doe does get to solve two separate cases, one involving a Nancy Grace stand-in. I don't like that lady, so it's always enjoyable to see her get skewered.

Artwise, Paul Azaceta reminds me of John Paul Leon, drawing the characters with thick lines and lots of shadows. It's a good style for a gritty series like this one, and he uses a few nice flourishes, like motion lines that show up around characters' heads or hands: 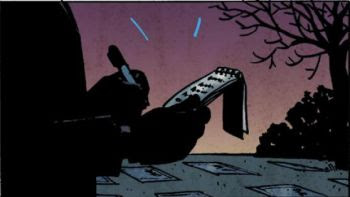 So it's a pretty good setup for a series, and it could lead to some interesting stories. I always like to encourage comics that try to expand into non-superhero genres, and this seems like it could be a good one to push on fans of crime shows like CSI. It's only three issues long, but hopefully Waid will try to keep publishing more stuff along these lines.

This review was based on a complimentary review copy provided by the publisher.
Posted by Unknown at 8:21 PM