Doctor 13: If I was an architect, I would also be immoral 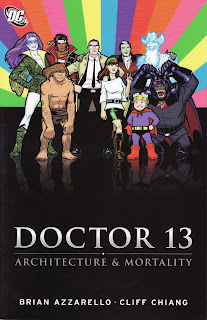 I don't really have anything too incisive to say about this book; for that, I'll steer anybody interested to the excellent pair of critiques by Abhay Khosla and Jeff Lester at the Savage Critic(s), in which they discuss the types of stories in which creators mourn the loss of (superhero) comics' rich, quirky past in favor of the ol' grim 'n gritty. After a call by Abhay, the term "nostalgicore" has been coined, and it's a great one. But while it's a great discussion, I don't know if the work engages me on that level; it's more of a metafictional look at characters begging to exist, fighting against the constraints of being fictional, which is something I love, regardless of the genre. The thing is, I don't see this as a condemnation of any modern types of storytelling; it's more of a fun, funny look at some crazy characters and types of stories. If anything, it's a reminder not to forget this stuff exists in the forgotten corners of the DC universe. I mean, one of the antagonists of the story is Grant Morrison, and if anybody loves to dredge up goofy stuff and give it new life, it's him.

But aside from all that, the story is just plain fun. I'm fairly used to Brian Azzarello's witty, pun-filled dialogue in 100 Bullets, but where that book's jargon is obtuse and sinister, here he's just going for laughs. It's a riot, and the unique style of transcribing accented English is also hilarious ("Joo a yoo?"). And Cliff Chiang's crisp, cartoony artwork is amazing (a lot of credit should probably also be given to colorist Patricia Mulvihill), perfectly rendering these characters and adding lots of fun details, like this bit, where General JEB Stuart (the guy who haunted a certain tank) and Captain Fear (a ghost pirate) are swordfighting. They end up chopping each other up, but since they're both ghosts, their pieces stay together, leading to this priceless reaction shot:

In addition to those characters, we've also got Anthro the caveboy (who speaks French, for some reason), Infectious Lass, the Primate Patrol, Genius Jones a kid who can answer any question for the price of a dime, and I...Vampire, an emo bloodsucker who gives us some great jokes, since everyone around him has to follow up anything they say that rhymes with "I" with "...Vampire?" Here's my favorite: 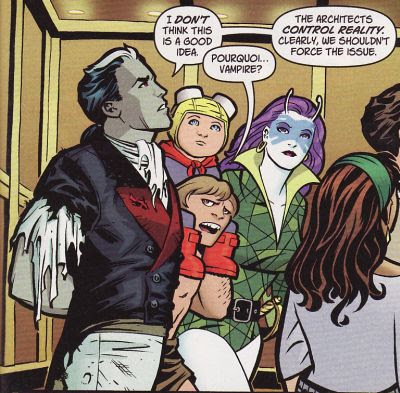 In the story, these characters are fighting to keep from being erased from existence by the Architects, who are never named, but are supposed to be Geoff Johns, Grant Morrison, Mark Waid, and Greg Rucka, the writers of DC's 52. It's pretty amusing and fun, but like I said, I don't think it's that effective of a critique against modern storytelling. It's really just a call for characters like these to stick around, and I'm okay with that. Especially if they're in fun stories full of great art like this. So give us that promised sequel already!
Posted by Unknown at 9:37 PM