Before I get started, I'll link to another review I did for SBC, of Madman Atomic Comics #4.

And here's the rest of the solicit crowd, although there are a few conspicuous absences, like Oni Press. Here we go, in alphabetical order: 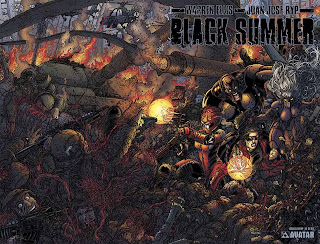 BLACK SUMMER #5 - The miniseries will be nearing a close by this point, and hopefully it will still be entertaining. It'll be plenty violent, judging by the cover, but every cover has been that way. Um, not much else to say here. 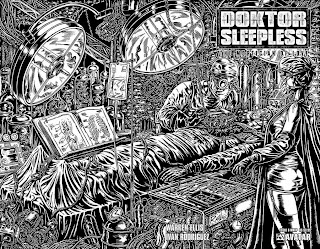 DOKTOR SLEEPLESS #6 - This series looks to be still going strong. It's been decent so far, but I'm still hoping it will get better. It's got the usual Warren Ellis techno-future, but the main character has potential to be pretty interesting, being a mad scientist and all. We'll see. 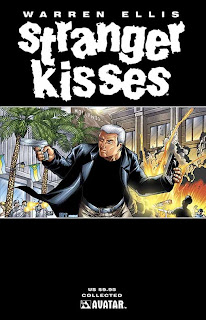 STRANGE KISS TPB
STRANGER KISSES TPB - I guess it's Warren Ellis month at Avatar, for me at least. I already have both of these three-issue miniseries (both illustrated by Mike Wolfer), and they're all right, if not exceptional. The intent seems to be to shock and disgust, with weird, explicit sexual art showing us the adventures of a "combat magician". Decent stuff, and worth getting if you're an Ellis fan. But if you've just heard of him and want to see the appeal, this is probably not the place to start; you'll probably run away screaming. 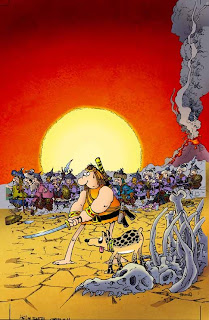 GROO: HELL ON EARTH #4 - It's the end of the "Groo causes global warming" miniseries, and I expect it to be fun. Don't let me down, Aragones and Evanier! 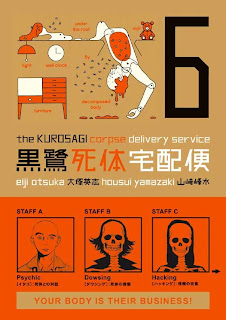 THE KUROSAGI CORPSE DELIVERY SERVICE VOLUME 6 - It probably gets tiresome when I say this for seemingly every manga series that I read, but I'm behind on this series and hope to catch up someday. That is all. 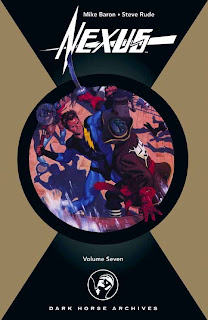 NEXUS ARCHIVES VOLUME 7 - Okay, I have a question: does anyone actually buy these? I would love to get caught up on Nexus; I hear all the time how great it is, and there's a new series coming out that I would consider buying if I could read some of the past adventures of the character. But 50 bucks for 208 pages of material?!? Who's going to pay that when you can get a better deal on comics pretty much anywhere else? A regular manga digest is about that long for a fifth of the price. The only people who are going to buy this are probably already Nexus fans! Come on, Dark Horse, put out some cheaper versions so non-initiates might actually want to buy them! 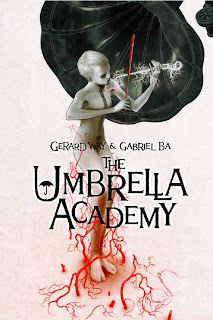 THE UMBRELLA ACADEMY: APOCALYPSE SUITE #4 - Wow, that is an incredibly beautiful cover. James Jean rules. I liked the first issue quite a bit, so I'm pretty stoked to read the rest of the series. 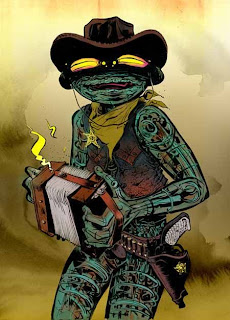 CORY DOCTOROW'S FUTURISTIC TALES OF THE HERE AND NOW #3 - While I'm not sure I'll get the previous two issues of this series, I'll probably pick this one up, since I don't think I've read "Craphound", the story being adapted here. Unless, of course, I really dislike the art style or something. But look at that awesome Paul Pope cover! That'll be hard to resist. 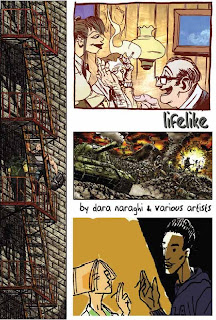 LIFELIKE - An anthology of "slice-of-life" stories from contributors whom I don't recognize (other than Dara Naraghi, the writer of the aforementioned Cory Doctorow series). It might be worth a look. 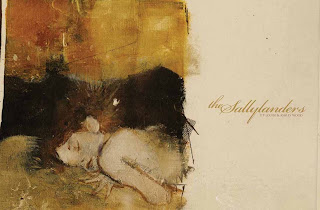 SALLYANDERS - A graphic novel from Ashley Wood (he writes and draws, although T.P. Louise is also credited on the cover, if not in the solicitation). A little pricey ($19.99 for 100 pages), but I really dig Wood's stuff, so I'll probably end up getting it. 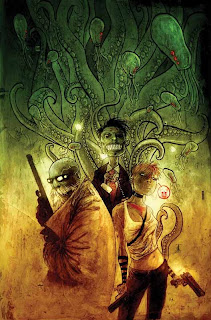 WORMWOOD: CALAMARI RISING PART #1 - A sequel to Ben Templesmith's miniseries (which I still need to pick up). The bits I saw of the first one were pretty fun, full of Templesmith's wit and visual panache, so I don't see why this would be any different. I'll probably wait for a trade though.
-----

And I think that's everything that I saw worth noting. I don't know if any of Red 5's books will be worth getting, so I didn't list them. But they do look interesting, so depending on initial issues, I might start including them in these roundups in the future.

As for other content, I'll probably have at least one more review up tonight, so keep an eye out. You know where to look.
Posted by Unknown at 1:21 PM