Silent War: I sure haven't heard many people talk about it

I mean really, did anybody else read this thing? 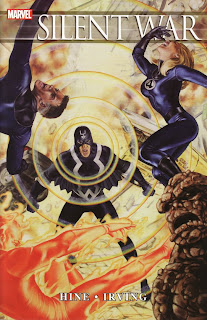 Spinning out of whatever the hell is going on in Marvel comics these days, this miniseries details the conflict between the Inhumans and the United States government, who have stolen (or at least acquired) the Terrigen crystals that enable Inhuman society to function. For anybody who doesn't know, the Inhumans were a race of super-powered people introduced during Stan Lee and Jack Kirby's original run on Fantastic Four. They lived in their closed-off city of Attilan, which was relocated to the moon at some point (I think it was during John Byrne's run on FF). There's a lot of history involving them over the years, but I'm largely unfamiliar with it, other than their initial appearance. But I was still able to follow this just fine, since it mostly sticks with the core Inhuman characters (Black Bolt, Medusa, Gorgon, Crystal, Maximus) and one or two others, like Crystal's daughter Luna.

It's an odd book, partially rooted in the nonstop event madness of the current Marvel universe (it follows directly after "Son of M", which was a sequel of sorts to "House of M", which followed up on "Avengers Disassembled", and so on), and attempting to inject real-world politics into Marvels fantastical milieu (there's talk of weapons of mass destruction, Geneva conventions, mutually assured destruction, and genocide, for starters) but it mostly transcends such trappings to tell a (In)human story about characters caught up in events larger than themselves. Black Bolt is struggling under the bonds of leadership, possibly leading his people into an unwinnable conflict. Medusa is feeling distanced from her husband and possibly driven into the arms of his insane brother Maximus. Crystal is trying to do what's best for her daughter and her family, but still has feelings for the crazed Quicksilver, who stole the crystals and set off the whole conflict. Luna is still too young to understand what is going on, but she tries to help as best she can. And Maximus, in a great use of his character, sits Joker-like in his jail cell, manipulating people in order to worm his way back into power. It's a pretty good ensemble piece, with each chapter narrated by a different character, giving a personal feel to a large conflict. The biggest complaint I have is probably too much use of the Sentry, a really lame character. But apart from that (which might have been mandated by editorial, who seem intent on pushing the Sentry as a major character), it's pretty well done.

But while the story is pretty decent, Frazier Irving's art is the real star of the show; I certainly wouldn't have bothered to pick this up if, say, John Romita, Jr. had illustrated it (not that I dislike Romita, but I certainly don't dig him enough to buy this sort of Marvel (or DC, for that matter) continuity-fest, no matter how well it's written). Irving's work is just incredible here, lending an otherworldly feel to the story about freaky beings fighting each other. He really brings out the bizarre and grotesque in superhero stories; I wish he worked on this sort of thing more often (luckily, he's currently illustrating the excellent Image miniseries Gutsville, so I'm getting a pretty regular dose of his awesomeness). From the range of subtle expressions on characters' faces, whether normal-looking: 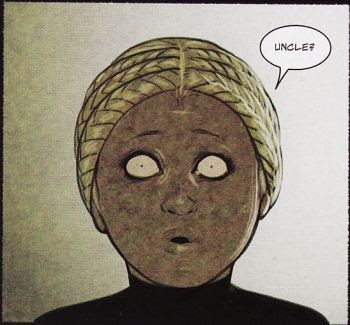 To the innovative portrayal of their abilities:

He seems to be drawing his heart out. It's probably the best work I've seen from him. I'm amazed at the color work he does here, using computer techniques to add texture to surfaces and give action scenes a real kick: 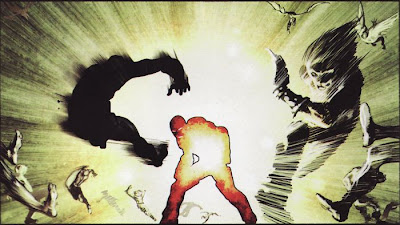 And the trippy visions he composes to demonstrate Luna's powers are flat-out beautiful:

And that's only the tip of the iceberg. There's plenty of other really cool stuff, like Quicksilver's ultra-creepy use of the Terrigen crystals, the spooky landscapes (moonscapes?) of Attilan, or Gorgon's horrific secondary mutation. It's really some of the best art being produced in mainstream comics today.

So while it's certainly not an essential series, it has some really good moments, and it's worth getting just for Irving's incredible visuals. The ending suggests that there will be more to come, but unless it's illustrated by Irving or somebody else I really like, I won't bother reading it (and if it's written by Jeph Loeb, all bets are off). This nicely-gilded slice of modern Marvel is enough for me for a while.
Posted by Unknown at 8:15 PM