The Annotated Mantooth: Matt Fraction has come a long way 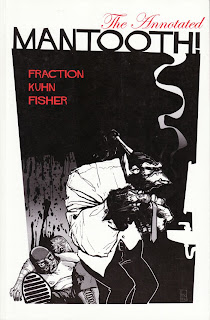 These days, Matt Fraction is the highly regarded genius behind Casanova, Punisher War Journal, Iron Fist, and The Order. But he wasn't always so infamous. What was he working on before he broke through and became an internet darling? Well, I'll tell you: it was Mantooth, part of Ait/PlanetLar's Double Take, along with Joe Casey and Charlie Adlard's Codeflesh. It was the story of a superspy gorilla named Rex Mantooth, and his over-the-top world-saving adventures that can usually be summed up with the phrase "Kick! 'Splode!".

It's a fun book, but it certainly shows as an early work, containing a lot of the crazy ideas and frenetic action of Fraction's later work (especially Casanova), but none of the heart. There's some damn funny writing, with lines like "Those robo-dicks had jetboots. I wish I had jetboots." Or "I took ass-whup as an extracurricular at finishing school." Not to mention the good use of profanity, like "Sweet Mary, mother of fuck!" or "Hoppin' he-cunts!" There's also lots of ridiculous action, with silly stuff like ninja robots, exploding tuxedos, rabid ducklings, a giant killer robot named "World's Greatest Grandpa" (Fraction always has to work in a giant robot), Adolf Hitler, an evil Oprah Winfrey-knockoff who trains lesbian assassins, and zombie Stephen Hawking: 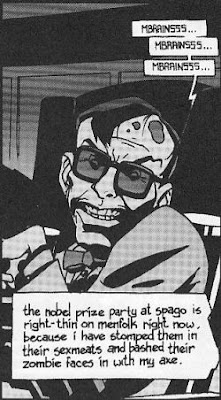 That panel always cracks me up. Really, the book this probably reminds me of most is Nextwave, except it's missing two bit things that contributed to that masterpiece: the depth of the Marvel Universe, and Stuart Immonen's amazing artwork. Andy Kuhn certainly isn't bad, but he's just not at Immonen's level. Or Gabriel Ba and Fabio Moon, for that matter. But Kuhn does the best he can, giving us wild scenes packed with detail: 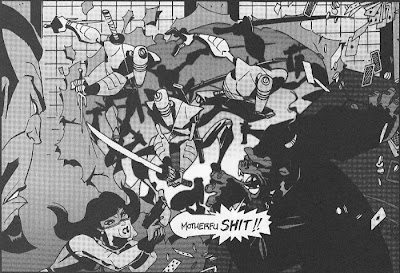 This annotated version of the series contains the full script for each issue printed opposite the corresponding comics page, along with Fraction's notes, which try very hard to be funny, alluding to media controversies that the book supposedly stirred up or bragging about his accomplishments. There are also introductions by Warren Ellis, Joe Casey, and Greg Rucka, text pieces by Fraction about making the comic and meeting the "real" Rex Mantooth, and an afterword from publisher Larry Young. It's all entertaining enough, but it definitely seems to be padding, considering the three actual stories are each only thirteen pages long.

So it's a fun book, especially if you're interested in Matt Fraction's earlier career. You can see the seeds of his future greatness, and have a good time too. I don't know if it's worth full price though; it's worth it if you can buy it used. Now I just have to find Last of the Independents...
Posted by Unknown at 9:39 PM