Good As Lily: I prefer roses

Another lame post title. I need to work on coming up with puns or something. Anyway: 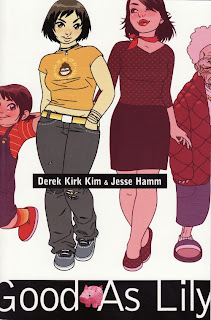 The fourth entry in DC Comics' Minx line of graphic novels aimed at teenage girls is all about an eighteen-year-old girl named Grace who meets versions of herself at different points in her life. It's never explained what exactly brings them together (although a strange incident involving a piñata seems to have something to do with it); they just run into each other one night, and Grace brings them home and starts living with them, hiding them from her parents and passing them off as relatives to everyone else. Grace is at a precarious point in her life; at eighteen, she feels like she hasn't really accomplished anything, and although she got into Stanford, she isn't really sure what she wants to do in the future. She has friends (including a boy she's known for years who obviously has feelings for her), but she also harbors a major crush on her drama teacher, Mr. Levon.

The insertion of three other Graces into her life shakes things up a bit, and although it starts out as a comedic device, we slowly realize that they are there for a reason, with each of them wanting to sort out something they regret and teach teenage Grace a lesson (although it's not as obvious as it sounds; there are no explicit morals here). Six-year-old Grace manages to reconcile her feelings about her older sister Lily, who died at the age of eight and always loomed over her as a "preferred" daughter to their parents (hence the title; Grace doesn't feel like she's ever as good as Lily). Twenty-nine-year-old Grace has regrets about what she didn't do when she was younger and thinks perhaps the best years of her life are over. Eighty-year-old Grace regrets everything, having pretty much given up on life, enjoying only cigarettes and daytime TV. She gets to realize that she can still make a difference in people's lives, and teach teenage Grace not to overlook the treasures right in front of her.

It's beautifully written, with all of the above information coming through interpretations, rather than baldly stated to the readers. There's plenty of comedy and fun scenes in addition to the life lesson. And along with the Graces, there are plenty of other well-rounded characters, like Grace's parents and friends, or the mean girl at school who we eventually find out feels the same way about Grace as Grace does about Lily.

Unfortunately, Derek Kirk Kim doesn't provide the art along with his story. Not that Jesse Hamm is terrible or anything, but Kim could have pushed this book to a whole new level, creating an instant classic. As it is, Hamm does a workmanlike job, following Kim's script and character designs. Sometimes the art gets a bit rough, especially in the changing contours of characters' mouths, but it usually works pretty well. However, Mr. Levon does come off as vacuous and empty-eyed: 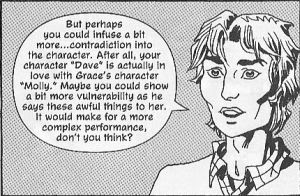 And he wears the same outfit, a V-neck sweater over a plaid shirt and black tie, in every appearance, even when he's chaperoning the school dance. That was bothersome. But usually the art is pretty good, and occasionally looks pretty nice, like in this panel that uses greytones to beautifully define Grace's features: 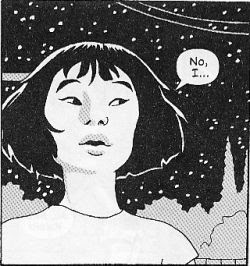 So it's a wonderful story with art that, while not perfect, is certainly quite readable. I would definitely recommend it, and I should mention that my wife read it and liked it too. Check it out!
-----

I originally had the following paragraph in the middle of the above review, but I thought it kind of interrupted the flow and didn't really have to do with the actual critique of the book, so I took it out. But I didn't want to waste it, so here it is:

The first time I ever heard of Jesse Hamm was in a blog post he did back in March in which he complained about writers not knowing enough about art (the post gained some notoriety around the comics blogosphere after Mark Waid stopped by and left some angrily argumentative comments). One example he gave was having a character express two mutually exclusive emotions in one panel, forcing the artist to draw the character with two faces. I probably wouldn't have paid it any mind regularly, but due to that post, I noticed several instances of that technique in this book:

It caused me to wonder if Derek Kirk Kim was the writer Hamm was complaining about. Strange.
Posted by Unknown at 7:40 PM