Resurrection: Not another Jesus comic!

Crap, that would make more sense if a certain review of mine had been posted at MangaLife. Hopefully it will be up within a day or two, and then I can pretend people know what I'm talking about. 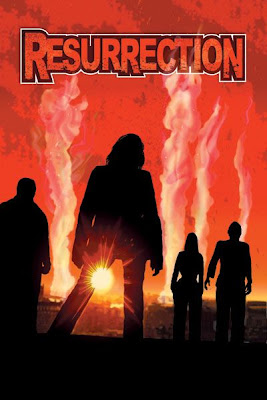 Writer Marc Guggenheim (Wolverine, Blade) came up with an excellent premise for this series: what happens after the alien-invasion story ends? For instance, take the movie Independence Day. After the aliens are defeated, what does humanity do next? Most of the major cities have been destroyed, military forces are decimated, and wreckage litters the landscape all over the globe. Will society descend into anarchy, or will people manage to rebuild some sort of functioning civilization? Guggenheim uses this idea as the jumping-off point; the series begins as the sounds of a ten-year war cease and people venture outdoors for the first time in a long while. We don't know exactly what happened over the past ten years, but there are hints, like the President talking with an advisor about some sort of weapon that repelled the "bugs", as the aliens are referred to. We also get a scene of a scientist who has an alien in captivity, and the mention of refugees, but the main character of the story is a woman named Sara who despairs at her fellow humans' immediate use of violence toward each other after they venture out of their hiding place. She decides to leave everyone else behind and walk to see her son in a nearby town. Along the way, she gets attacked by a mutant (what's a post-apocalyptic story without mutants?) and meets a man named Ben who decides to accompany her on her trek. It's all a pretty decent setup for the series, and I assume Guggenheim will start to flesh out the world a bit more in future installments.

Unfortunately, artist David Dumeer might not be up to the task Guggenheim sets for him. His background art is pretty nice, and his depiction of rubble and wrecked machinery even reminds me of Stuart Immonen's work on Nextwave:

But his character art needs a lot of work. Facial expressions don't quite match the dialogue (although that might be on purpose in some cases; Ben in particular seems kind of creepy), and the movements and gestures of characters looks pretty awkward, whether they are holding and/or firing a gun, scooping water from a pond, or just pointing a finger:

It was enough to distract me from the story, and that's not a good thing in what should be an immersive book. I suppose it's possible that Dumeer could improve, but right now it's a big problem for a book that otherwise has a lot going for it. If you're able to get past the art, it seems like it will certainly be worth following. The monthly series will be $3.50 per issue, and the first installment comes out on November 28.

This review was based on a review copy provided by the publisher.
Posted by Unknown at 9:52 PM