Chance in Hell: That's the likelihood that this won't be good

Does that make sense? I'm trying to say that a Gilbert Hernandez graphic novel can pretty much be assumed to be awesome.

Chance in Hell
By Gilbert Hernandez 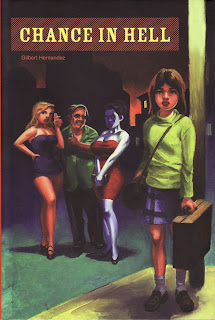 Gilbert Hernandez is one of those old comics pros who seems to work on instinct, churning out surreal masterpieces seemingly in his sleep. Actually, that might explain the dreamlike nature of works like Chance in Hell or his recent Vertigo graphic novel Sloth. So while I might not be able to fully understand these crazy stories, they remain so arresting that once I start reading them, they're near-impossible to put down. Everybody says it, but it's true: after twenty-five years of making comics, he's a master of the form.

This comic occupies an odd place in Gilbert's oeuvre; it's meant to be a movie in the "universe" of his regular Love and Rockets stories, featuring one of his regular characters as a member of the cast. He hints at the possibility of more of these movies/graphic novels in a collage of movie posters on the inside front and back covers of the book. In fact, one of them, Speak of the Devil, is currently coming out as a miniseries from Dark Horse. But none of that knowledge is really necessary to enjoy this book; it's not even indicated anywhere on or in the book itself.

The store here is divided into three parts, each following a part of the life of a girl named Empress [caution: mild SPOILERS ahead]. In the first part, she is only a little girl, living in a junkyard/landfill/wasteland called "the Pit" outside of an unnamed city. We never learn how she ended up there, but there are several other children there also, and they all seem to have been abandoned. We also see some adults, notably some workers who are always repairing some strange machinery and the soldiers protecting them. Other adults seem to be sightseeing, including a man who claims to be from the Pit originally, before he escaped to the city. And then there are the child predators, from whom an older boy has taken upon himself to protect Empress. And well he should, since she seems incredibly trusting, calling every older male she meets "my daddy". It's all rather strange (like the rest of the book), but still emotional and moving, featuring poignant panels like this one:

Gilbert might be making a point about how those of us in "civilized" parts of the world can often ignore the circumstances of those less fortunate, even if they're right in our back yard. But that's obviously all there is to the story, as unfortunate events occur, and Empress is "rescued" from the Pit and taken to live in the city with a benefactor.

Thus begins the second part of the book, in which Empress is a pre-teen, living with her guardian and trying to fit in to the more civilized world. But the only person she can relate to is a young pimp and his stable of "hearts of gold". The kid seems to be about the same age as her, and while he's nice to her, he's a typical pimp, beating his whores with a rubber hose if they get out of line, or taking an iron bar to his competition. It's a look at how even the more "civilized" world is still savage and brutal, and while people can try to escape their ugly origins, they still have ugliness and violence inside them.

There's also an interesting look at the supposed benefits of civilization in Empress's "sugar daddy". He has tried to immerse himself in high culture, probably to get far away from his origins in the Pit. He works as an editor of poetry, but as the story progresses, he starts to get more and more sick of it, until it loses any meaning for him, and he can't tell good poetry from bad. Art can have a cathartic nature, but when you use it as a blunt tool to show that you are civilized, it's only an empty substitute for real feeling, and you have to search elsewhere for release.

That search leads to tragedy, and Empress gets sent to a "Safe Haven for Girls". We catch up with her as an adult in the third part, and she's married to a young hotshot attorney who prosecutes infamous criminals like a "babykiller" who has been in the news. She works at the Safe Haven, trying to help out girls like herself who came from unfortunate situations, but she still seems to feel guilt that she can't do more. The story gets especially surreal here, with a strange old man appearing to her, talking about surviving the electric chair. There's also quicksand in their backyard, and Empress and her husband are not able to save a woman and her daughter from drowning in it. The husband takes pride in punishing wrongdoers, but he can't actually help somebody in need (sounds like a certain country that most of the people on earth love to hate). This final part seems to be all about survivor's guilt; Empress may be able to save herself, but how many are going to die that she can't help? Eventually, she overcomes this guilt and goes on to live a full life. Or does she?

So I'm not sure what it all means; it's a visceral experience, striking directly at the subconscious. It will probably haunt my dreams, and I'll be unable to interpret them. But it's a great experience, due in large part to Gilbert's beautiful art. He seems to have pared his detail levels to near-minimum, but he's still able to convey mood and emotion wonderfully, as in this panel full of ominous clouds and indistinct buildings: 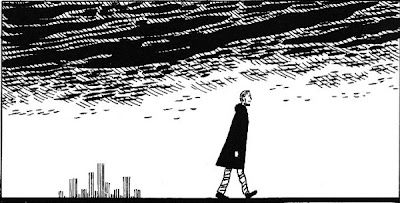 Or the simple lines making up these obscured facial expressions: 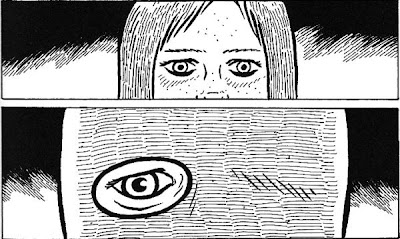 And his sense of movement is always impeccable, with characters giving us as much information through body language as through dialogue. And the violence is shocking and gruesome, in keeping with the atmosphere of an exploitation film.

All in all, it's a really good book, but it might turn people off through its obtuse nature. Everything seems to be based in mood and feeling, and the story is up to interpretation, with any one of many readings being valid. For those who like their stories concrete and simple, this is not the book to read. But if you like haunting imagery and a story that doesn't explain itself, this should be right up your alley.
Posted by Unknown at 8:58 PM