Optic Nerve: Ben Tanaka needs a punch in the face

I've had these issues for a while now, but I only just now finally got around to reading them. I would have scanned the covers, but I figured I would go with the cover of the upcoming collection, titled Shortcomings. 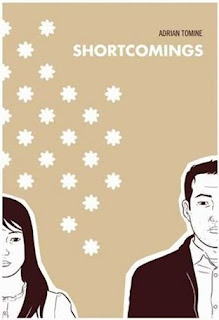 In the most recent issue of Local, Brian Wood wrote about how he is mystified that people seem to hate his main character, with some even going so far as to say they wanted to punch her in the face (a discussion of the issue between Wood and Local artist Ryan Kelly can be found here). It brings up some interesting issues, such as the fact that the writing must be pretty skilled to evoke such strong reactions, or the idea that flawed characters who make mistakes can be so hated by readers. As for me, I tend to like characters that aren't perfect; it makes them seem more identifiable and human. That said, I disliked the main character of this Optic Nerve story so much that I wanted to punch him (but not necessarily in the face).

Okay, that's a bit strong, but Ben Tanaka is a bit of an asshole. Adrian Tomine really crafted a reprehensible guy here; he's of Japanese descent, but seems to be pretty self-loathing, disliking Asians who get caught up in their cultural issues. He's dating a Japanese girl named Miko, but he harbors a desire to fuck white women. At the same time, he's incredibly assholish to her, and he gets in huge arguments whenever she brings up the subject of his desires. She's studying film and organizes an Asian-American film festival, but he belittles everything she does. It's pretty pathetic, and you feel happy for her when she gets an internship in New York and has to move away from their home in Berkeley.

That, along with the antics of Ben's lesbian Korean friend (a nice inversion of the stereotypical chick-flick gay friend), comprises the first chapter. The second chapter involves Ben's dalliances with white girls while he and Miko are "on a break", and the third sees him go to New York to try to find her and confront her about possibly "cheating" on him (double standard ahoy!). It's all pretty entertaining to watch, like a big train wreck. Like I said, Ben is not a nice fellow, and it's almost gratifying to see him get his comeuppance.

[SPOILERS from here on out, I suppose]

In this story, Tomine reminds me of Daniel Clowes, with his harsh view of hipsters and artsy types, although Tomine is less cartoonish and probably a little bit gentler in his ribbing. But it's still hilarious to see Ben go to an interpretive dance performance while trying to bed a girl he's interested in. The dance consists of ugly hippies prancing around naked, trying to be politically relevant by giving their dances titles like "Fallujah". Later, Ben goes home with the girl and sees her art project: a collage of photographs taken each morning documenting the results of emptying her bladder. In the final chapter, Ben finds out that Miko is dating a white guy (actually, he's half Jewish, half Native American), and he freaks out, spouting all kinds of arguments about how a white guy and an Asian girl dating brings up all sorts of racial issues. But him wanting to screw a white girl is completely different, of course. But then we find that the guy Miko is with is something of a douche anyway; he constantly speaks to her in Japanese, has an apartment filled with Oriental decorations, and tries to use karate when confronted by Ben. It's pretty hilarious.

There are a lot of interesting issues that Tomine addresses in this story, and he makes it quite entertaining to boot. We look at the Asian-American experience, grad school, adult relationships, gay and lesbian promiscuousness, and just general assholery. A good read all around, and one that I'll be pondering for some time to come. Just don't expect to like the main character very much.
Posted by Unknown at 7:57 PM