Apollo's Song: It's sung to a different tune than Kirihito's Ode

It should probably be noted that there are some mild SPOILERS in this review. Oh, and some possible NSFW images. Just saying. 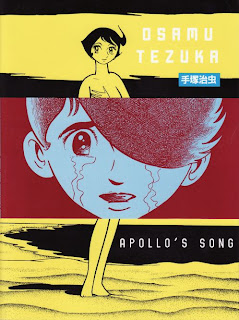 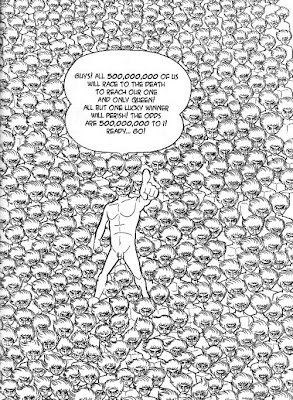 We follow that shot with a scene of all the "guys" rushing through cavelike passages in order to meet and bond with the single queen, who wears an interesting circular dress. You've probably figured out what this is supposed to be depicting by now, and the following pages confirm, depicting the growth of a baby in the womb and describing it as "the mark of love, truth, and sincerity between man and woman, male and female." That's the first ten pages in this 541-page monster of a book, and it's probably the most explicitly educational part of the whole thing. After that, it becomes more of a chance for Tezuka to meditate on love and human nature, following the mental travails of a disturbed young man named Shogo.

It seems young Shogo has not been treated well by his mother, a prostitute who brings many men home and punishes him whenever he catches them in the act of lovemaking. This has led him to abuse small animals whenever he sees them showing affection toward each other. Brought in to the mental hospital for treatment, the doctor decides to use electroshock therapy, which plunges Shogo into a fantasy (or is it?) in which a goddess curses him to suffer for eternity, loving the same woman over and over, but with one of them always dying before they can find happiness.

The eternal punishment kicks off right away, with Shogo waking up as a German officer in World War II, hauling trainloads of Jews off to the concentration camps. But one girl catches his eye, and when the train is attacked by Allied forces, he helps her escape. She runs off, and when he finds her, tragic events occur, but they still find a bit of love in their horrible circumstances. I'm not really sure what this sequence is supposed to be about, other than love reaching across human differences.

After an interlude in the hospital, Shogo undergoes another fantasy, this time induced by hypnosis. It involves him being stranded on a deserted island along with a woman named Naomi. They discover a bunch of tame, peaceful animals on the island (including Moomin), and he kills a rabbit for food, introducing them to the concept of murder. They reciprocate, badly hurting the woman, and he is forced to care for her while living on the island and learning about love and sex from the animals. That's right, the animals teach him all about monogamous relationships, causing him to ponder how human emotion gets in the way of the true expression of love: 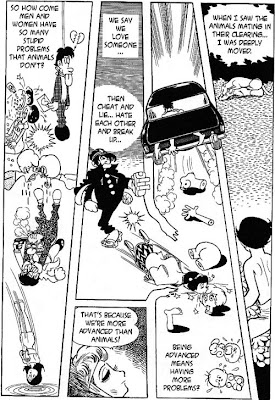 Eventually, things turn tragic, with Naomi deciding to kill Shogo to protect her honor, the volcanic island erupting, and a rescue boat arriving bearing not-very-nice rescuers. The point of this bit seems to be to compare people to animals and see the complexity of human relationships. And to have another tragic love story for Shogo.

After he wakes up, Shogo spends a large portion of the book in the "real world", escaping the asylum and eventually taking refuge in a mountain cabin along with a woman who wants to train him to be a marathon runner. I'm not sure where that came from, but it mostly seems to be setup for later events. The main purpose at this point seems to be to lead into another fantasy sequence, this time set in the far future. In this dystopian era, humans have been mostly replaced by synthians, clone duplicates of humans that have improved on our faults, mostly by eliminating sexual reproduction and love. In exploring this future, Shogo sees the chilling remnants of human society: crumbling buildings and streets choked with the tombstones of all the humans who died from pollution: 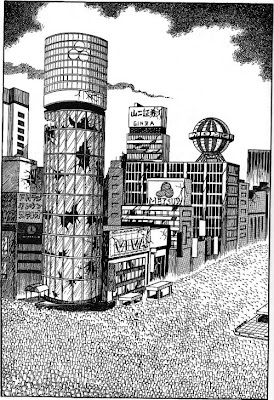 Shogo gets sent on a mission to assassinate the synthian queen, who bears an uncanny resemblance to all his previous lovers, especially Hiromi, his trainer. He becomes one of her slaves, and she uses him to learn about human love. Killing her turns out to be impossible, since she can always come back, Cylon-style, in another cloned body. She eventually comes to love him, even taking it upon herself to have her body altered to add human sexual characteristics. He comes to requite her love, but gets caught in the middle when humans revolt. The humans want to kill her because she was so cruel, and the synthians want to kill her because she sullied herself with human feelings and tried to become one of them. In an agonizing scene, Shogo has to watch as duplicate after duplicate of the queen is killed, with each one professing her love for him with her dying breath. It's pretty horrific stuff, and it all ends tragically, like every story in the book. The point here seems to be that all the messy emotions are necessary for human existence; without them, we would become soulless automatons.

In the book's final sequence, we learn Hiromi's true motives for training Shogo, and more tragedy ensues. It's kind of the expected ending to the story, with Shogo finally coming to understand love after all the lessons he's learned, and eventually sacrificing himself for love. But we see that the goddess's curse is still in effect, and he'll keep living out these types of stories forever.

So while it's not great literature, it's a fun read, with plenty of epic moments and lots of signature Tezuka craziness. His art is as beautiful as ever, giving us detailed cities and beautiful nature scenes: 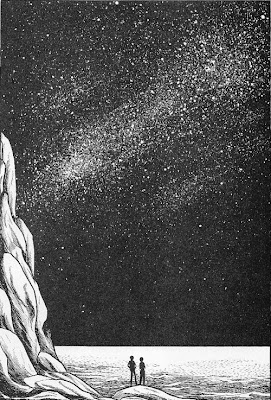 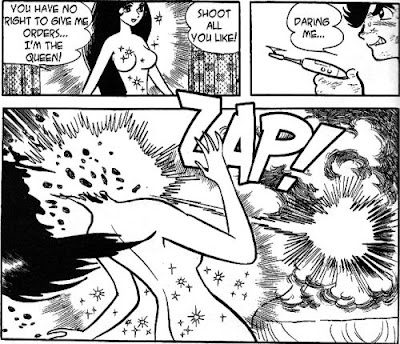 Tons of unique characters, humor, and everything else you would expect from one of his stories, including some stuff that is just plain trippy: 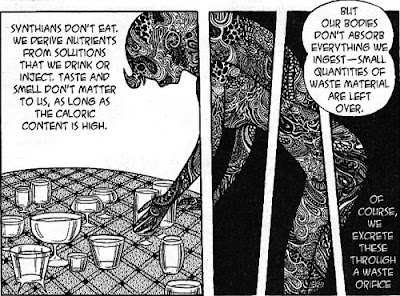 Some of his themes seem to be simplified a bit, and things are spelled out overly clearly, but that's presumably because this was intended for younger readers. It's definitely worth reading for those interested in his work, but those who are new to Tezuka should probably start elsewhere.
Posted by Unknown at 9:48 PM