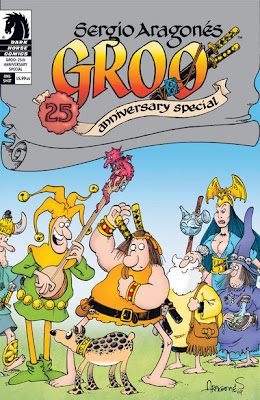 I'm too much of a Groo fan to make this a coherent review, so expect this to be a rambling collection of thoughts. Sorry, fans of good writing.

I made some predictions in my weekly preview as to what I though we would see in this anniversary issue; I figured Sergio Aragonés and Mark Evanier would pull out all the stops, jamming in every member of the extended cast and including as many of the series' running jokes as possible. That didn't really seem to be the case; instead we got a good Groo story, a L'il Groo backup (which I've read somewhere else; maybe a Dark Horse anthology book?), and a rhyming alphabet/character guide, which is probably the section closest to what I was expecting. Let's see how my predictions played out:

I suppose I could have added "social satire" and "Groo being dumb" to the list (although the latter is a given). But social satire is also a prominent element of the series, and although it can sometimes be a bit heavy-handed (I'm thinking specifically of #120's gun control screed), when they're on, it doesn't get much better. Luckily, this story is an example of the latter, with Groo and Sage encountering a plague and dealing with the medical establishment, which is more interested in selling medicine to people than curing anything. When a cure is found, they recruit the priests to help get it to the people, but the priests refuse because they don't want to encourage kissing (which spreads the disease). Man, I love that stuff. Aragonés is such an old pro, his timing is perfect on all the jokes, and Evanier has been working with him for so long, he knows exactly how to use the characters and situations for maximum comic effect. Wonderful, wonderful stuff.

The backup stories are also pretty good (and so is Evanier's text piece in the middle of the issue), and they've whet my appetite for more Groo. Luckily, a four-issue miniseries entitled Groo: Hell on Earth is coming out very soon, and someday we'll see the Groo/Conan crossover that has been confirmed. That latter is a weird one; Groo isn't a character that crosses over, so I really don't know what that will be like. I'm sure Aragonés and Evanier will have lots of fun with it though. I care not a whit for Conan, but I'm sure it will be interesting.

Okay, that's enough rambling about Groo (for now...). I'll leave with my favorite entry in the Groo Alphabet: 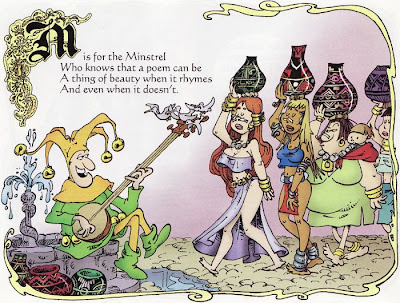