Here's another one from Ambrosia Publishing, whom I had never heard of before they asked me to review some of their books. I'm glad they did; they seem to want to publish interesting works. 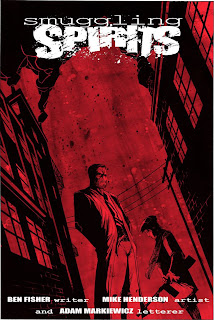 This book certainly has an interesting concept, which could be described as The Road to Perdition meets Hellboy. It imagines a prohibition-era scenario in which monsters called "darklings" roam the land preying on people. The main characters are Nathan, an orphaned boy, and Al, a tough alcohol smuggler. For some reason, Al can't see any of the darklings, and he won't even acknowledge their existence. It's like he's willfully blind, and his mind filters out any information about the supernatural. I'm sure we'll eventually find out the reason for this, but for now it serves mostly to frustrate Nathan when Al shrugs off monster attacks nonchalantly, saying they were just snakes or vultures. The pair of them seem to want to stick to rum-running, but by the end of this volume of the series, they've become caught up in events beyond their control.

The story is interesting enough, but the art is the real draw. While Henderson could use some work on his faces, the backgrounds and depictions of monsters are quite impressive. At times, he seems to be influenced by Frank Miller, using white-on-black silhouettes and emphasizing details like folds in clothing or torrential rain: 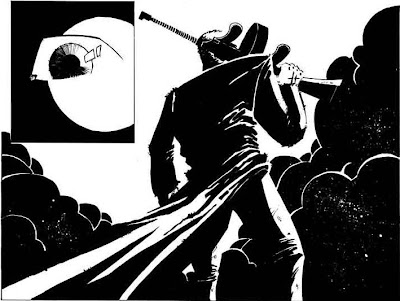 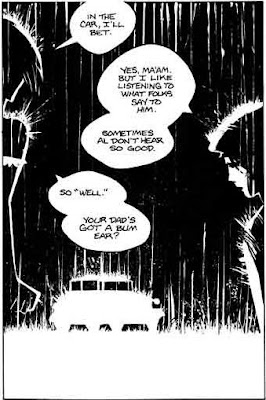 Other times, he uses soft edges to create spooky-looking creatures that are actually quite detailed: 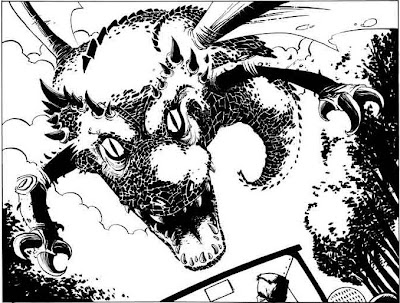 It's beautiful stuff, and it certainly has me intrigued. It's an interesting concept for the story, and with a little improvement, I think the art has the potential to be really striking. I'll certainly be watching out for future issues of this series.

The book is 54 pages long, and it's supposed to come out in October. However, you can read a preview on Ambrosia's website, and even purchase an electronic copy right away. I recommend it!

This review was based on an electronic copy provided by the publisher.
Posted by Unknown at 7:36 PM