Glister: I could go on; boy, that Glister sure is fun 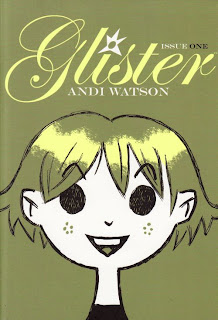 In a book that my wife would surely describe as "super-cute" (I'll have to ask her after she reads it), Andi Watson tells the story of Glister Butterworth, a young girl living in a ramshackle old English manor called Chilblain Hall and dealing with the supernatural on a regular basis. In this installment, an unmarked package arrives at the house, and it contains a nice teapot. But when tea is made, the ghost of a writer named Phillip Bulwark-Stratton emerges and he convinces Glister to take the dictation of his unfinished masterpiece. She agrees, but soon wants to get rid of him, since he won't leave her alone, bugging her to type at all hours of the day. Plus, the novel is unrelentingly bleak, and he even thwarts her secret insertion of hopeful plot elements. It's lots of fun, and the best thing about it is that Glister eventually solves the problem using her own smarts and moxie. She's a fun protagonist, and I'm sure Watson will continue to tell plenty of cute stories of her adventures.

Along with the fun story, Watson's art is quite nice, with thick, scratchy lines that still give lots of detail. Glister and all the surrounding characters are very expressive, and the setting is really nicely realized, with crumbling walls and expansive, placid countrysides. I also like the light grey tones used to differentiate the ghost from the living characters: 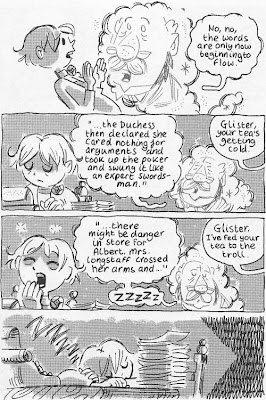 And the character design for the ghost is great; I love the stereotypical "English gentleman" look, especially after his secret is revealed.

The main story is 51 pages long, and the rest of the book is taken up with a 13-page Skeleton Key story. I'm not familiar with The Skeleton Key, but it sounds like a fun series; it's about a girl who travels through spiritual dimensions by using the titular key, accompanied by a fox spirit and what seems to be a racoon/backpack. The story here is pretty fun; I'll have to check out the original series sometime.

So, it's a fun book, with a good amount of content for the price ($5.99), and it's formatted like a manga digest for maximum appeal to the kids it's aimed at. I'll be sure to pick up future issues, and maybe even pass them on to young people that I know.
Posted by Unknown at 9:36 PM