These movies have little in common, except that I watched them close together, and I'm still trying to recover.

Man oh man, is this a crazy movie. It's an anime feature from Studio 4°C, the guys behind cool works like Memories, Spriggan, and the recent adaptation of Tekkon Kinkreet. It's a fascinating, hallucinatory, overwhelming visual treat, even if I didn't know what was going on. The animation style is pretty unique, more like European comics than the usual manga style in most anime: 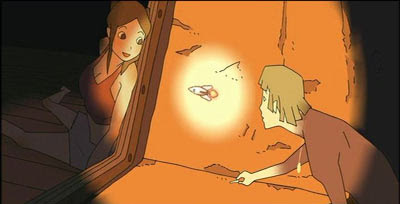 But still pictures are deceptive; you really have to see this stuff in motion to appreciate it. The backgrounds expand and move around the characters, and while those characters look "flat", they often turn and move in amazingly detailed ways, sometimes stretching into crazy, exaggerated figures: 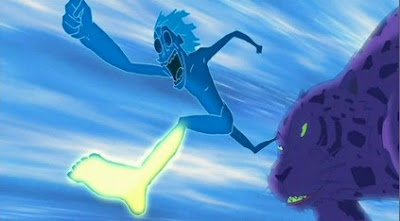 And occasionally cutting to photo-quality images of the characters that are graphically manipulated and jerkily animated:

The story involves a young manga artist named Nishi (apparently named after the creator of the manga the movie was based on) who is in love with a childhood friend named Myon. He goes with her to a sushi restaurant owned by her father and run by her sister, and they are all rudely interrupted by a couple of gangsters who show up to collect some debts. [Oh yeah, SPOILERS her, I guess]. One of the gangsters is a crazy, baldheaded soccer player (he's wearing a jersey and clutching a ball), and he snaps, attempting to rape Myon and killing Nishi in a particularly gruesome fashion. Nishi wakes up in the afterlife and has a conversation with God, who can't seem to hold a single form for more than a few seconds. Here's one form, although there are probably a hundred others, from cartoons to photos to weird blobs of who-knows-what: 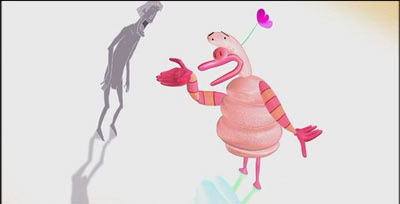 After replaying his death over and over, God sends Nishi away to oblivion, but he doesn't want to go, so he runs to a different portal, managing to get back into his body just before dying. He seizes the day, turns the tables, and escapes with Myon and her sister. They get into a crazy car chase that ends with them flying off a bridge and getting swallowed by a whale. Hey, why not?

Most of the rest of the movie is spent in the belly of the whale, where they meet an old guy who has been trapped there for thirty years. He's built a good life with the various stuff that has been swallowed, so they spend most of the rest of the movie hanging out with him there and doing crazy stuff like dancing and making art. But eventually they hatch a plan to escape, leading to a climactic scene that involves them running for dear life across the surface of the water and out of the whale's mouth, with all sorts of crazy imagery flashing across the screen and through their psyches. It's an amazing scene, and it feels like it last for 10 or 15 minutes, all at a frantic running pace.

As I mentioned, the animation is just incredible, a sensory barrage seemingly featuring everything the animators could come up with. Bright colors, distorted characters, the aforementioned photo-manipulation, and an incredible soundtrack. One particularly beautiful sex scene sees the characters melt into intertwining splotches of ink or paint and dance about: 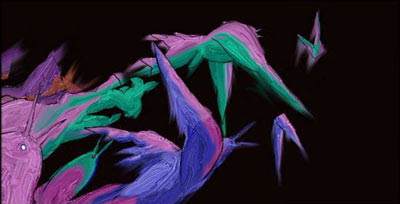 I don't know if I understand it very well (it might have to do with discovering dormant creativity/living life to its fullest before it's too late, or something like that), but it's an amazing experience.

Unfortunately, it's not too easy to get a hold of; it's never been released in the U.S. I had to get an import DVD on Ebay. While googling for the above images, I found this site, where you can supposedly watch the whole thing online, but I haven't tested it. So check it out, if you can find it. I've never seen anything like it.
-----

I always have trouble understanding David Lynch movies, sometimes to the detriment of the film. What the hell was going on in Lost Highway, anyway? But there's something about his style that makes him impossible to ignore; his movies have that quality that draws you in and won't let you look away. This one is a bit tough to weather though; it's a good three hours long, and it's as impenetrable as anything he's done (that I've seen, anyway).

The story, as it were, involves Laura Dern's actress character working on a movie and confusing it with reality. But there's lots of other weird stuff; before we even get to that plot, Lynch spends a good fifteen minutes on scenes of Polish gangster-types and prostitutes, along with a girl crying while watching a sitcom in which three people in donkey costumes (with clothes over the top) sit around an apartment spouting non sequitur dialogue. And that's only the tip of the iceberg. As Dern gets more and more confused, the movie devolves into sequences of her wandering through corridors (of her unconscious?) and witnessing strange events. She seems to be playing at least three different characters, or different versions of the same character: the actress, the role she's playing, and a third version who shows up later with bruises all over her face, talking to a guy in an office about how she violently fended off various men's assaults. We also see Dern watching a group of young women sitting around and commiserating with each other about men and occasionally breaking out into choreographed dance numbers. And then there are the various scenes of Polish men and prostitutes which seem to have nothing to do with the rest of the story.

I have a theory about what the movie is about, but I could be completely wrong. [SPOILERS here, I guess]. I think Dern is actually a mental projection of the woman watching the donkey show (har har) at the beginning, and she has lost her husband, possibly due to infidelity on her part. She imagines herself as a well-off actress acting in a glammed-up version of her life. The young women are probably other aspects of her psyche, and the scenes of Polish people probably have to do with her fantasies about why her Polish husband left her. [end SPOILERS].

So that's what I think, but I'm probably wrong. That's the little bit of sense I was able to make of the assemblage of strange scenes, creepy sounds, and bizarre imagery. It's pretty arresting; Lynch uses freaky music to great effect, adding an intense, surreal feeling to scenes that might just be odd in anyone else's hands. He also uses lots of jump scares, with sudden flashes, jangling sounds, or characters screaming at the camera. It's crazy stuff, but with the length of this movie, it gets exhausting. I was certainly ready for it to be over well before we actually got there.

But there's some really good stuff too, especially Dern's performance. She effectively portrays all the different versions of her character, and does a really convincing job as an actor playing a role. There's a scene in which she rehearses the script with her costar that reminded me of Naomi Watts' audition in Mulholland Drive. Lynch really knows how to draw great performances out of his actors.

So, crap, see it if you're a Lynch fan, I guess, but if you were annoyed by the craziness of Mulholland Drive, steer well clear of this one; it amps that sort of thing to a near-unbearable degree.

(Oh yeah, I should also mention Dern's apparent death scene, in which a couple homeless people spend ten minutes conversing about bus schedules over her body. Or the bit when she hangs out with whores and makes faces at another version of herself from across the street. Or hell, pretty much the whole movie. Jeez.)
-----

So that's my recent movie watching that I had to talk about. I should be able to get back to some actual comics stuff sometime soon. Really!
Posted by Unknown at 9:52 PM