Comics not on the web; these are on paper! 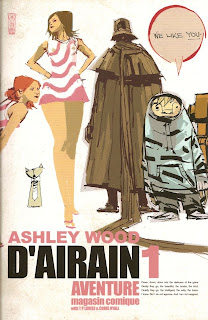 This is an odd comic. I believe it was Jog who compared it with Barry Windsor-Smith: Storyteller, although I've never read that comic, so I can't say if it's apt. This one is a collection of short stories, mostly with a horror bent. Wood provides all the art, including the front and back covers (inside and out), which have fold-out flaps. There are not ads, which is probably the cause of the $4.95 price point. There are also some pinups which are, well, pornographic. But the real meat of the comic is in the stories, which are written by Wood and his collaborators (I'm not sure what the extent of their role is) and lavishly illustrated by Wood. First is "Les Mort", which begins with two kids surveying what seems to be a post-apocalyptic wasteland (although I could be wrong about that) and reminiscing about a magician/escape artist they used to watch on TV. They also dare each other to go into the nearby houses which are rumored to be haunted or cursed. Then we shift to the POV of the aforementioned magician, a circus performer who wears a skull mask and kills himself in each performance, yet somehow manages to survive: 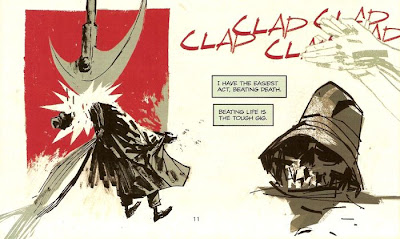 Actually, I think this is meant to be a flashback, since he seems to be wandering the wasteland as well. We see a shot of him saying "Revenge," and then To Be Continued. Huh.

The next story is called "Black Magick", and it's about a quiet suburban neighborhood in which a haunted house appears. I think. It's also To Be Continued, so we'll see.

Finally, we have "Zombies vs. Robots: Which Came First?" It's a prequel to the recent two-issue miniseries that Wood and Ryall did, and it's about some scientists who are testing a transporter, although they do not know what is on the other side. The experiment ends badly, although it's hart to tell exactly what happens, and it's also To Be Continued.

In all the stories, the art is beautiful, full of Wood's incredible style. I like the panel borders in the first story; they're drawn all rough and scratchy rather than clean and defined. It gives the page a dirtier feel, which is appropriate for the wasteland-like setting. The other stories have panels that are more cleanly defined, whether with lines or gaps between "tones". It suits them, as they both take place in ordered locations. I imagine future parts, in which the order will presumably break down, will feature rougher borders. Wow, I can't believe I chose to talk about panel borders when discussing the art. I dunno, that's something that really struck me.

So anyway, I'll definitely be back for future issues. I had never even heard of this project before this week, so I didn't know if it was supposed to be ongoing or what, but I checked IDW's website, and their solicitations for May include issue #4, so it will run at least that long. The inside back cover promises a future story called "World's Best Robots". Sounds cool. 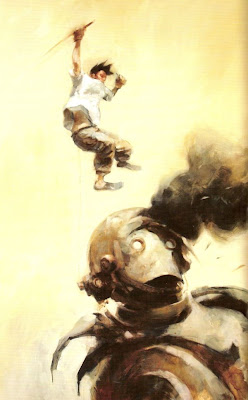 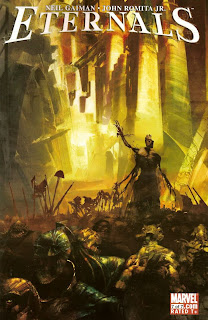 Well, this was kind of disappointing. Maybe it will read better when it's collected, but stretched out over seven issues, it seems like not very much happened [Spoilers ahead, by the way]. Last issue ended rather abruptly, with Zuras, leader of the Eternals, telling Tony Stark that they would not participate in the Civil War event on either side, but were above it. We get a sort of resolution to that discussion here, but it's in the middle of the issue as a flashback rather than at the beginning. Weird. So the Eternals are setting up base in the Antarctic, and the Deviants attack. That kind of came out of nowhere. It seemed like there were a couple Deviants messing around in previous issues, but suddenly there's a whole army of thousands ready to wage war on the Eternals. Again, weird. So Makkari manages to convince them not to attack, and then the series ends, seemingly as a setup for a possible ongoing series. There's not a whole lot of conclusion. I guess Makkari is the "envoy" of the golden (formerly black) Celestial, who has decided not to destroy the Earth, and is now just standing in Golden Gate Park, San Fransisco. Druig is still in charge of the country he took over, and seems to have evil plans. Zuras is hanging out doing his thing. Sprite is dead, so I guess that's some sort of conclusion for him. Sersi is hanging out in New York; she has her Eternal powers but no memories. Ikaris and Makkari are on a quest to "wake" all of the other Eternals on Earth. Who knows what Ajak is doing, since he no longer has the distinction of being the guy who can talk to Celestials [End spoilers]. It seems like the series ended and hoped somebody else would continue the story, which is pretty much the exact same thing that happened with Gaiman's other Marvel miniseries, 1602. I like Gaiman, but it seems I should avoid any future Marvel stuff he does, if this is how it's going to turn out. Bummer.
----- 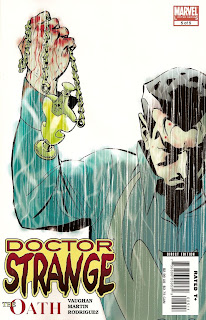 Now, this is the way to end a miniseries! Wrap up the damn story, but leave it open to continuation. As Greg Burgas at Comics Should Be Good said, you can pretty much see the ending coming from the first issue, but in my opinion, Vaughan makes the journey worth it. Martin's beautiful art doesn't hurt, either. 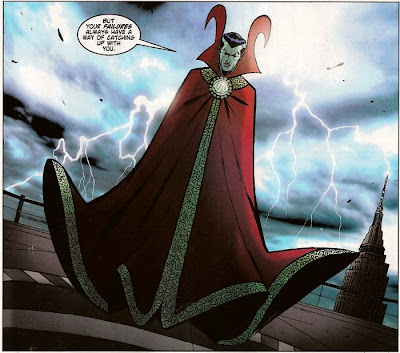 The Night Nurse is a good addition to Doc's posse, and it's awesome to see he knows the martial arts as well as the dark ones. So please, Marvel, let Vaughan and Martin do this on a monthly basis! I want more of this! 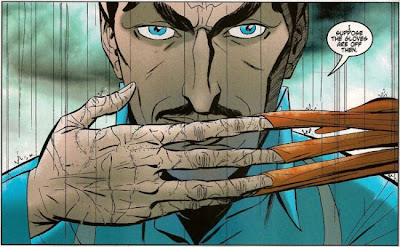 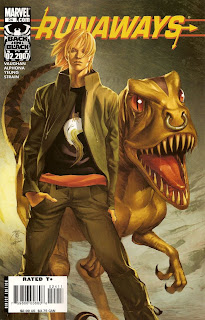 And now we come to the send-off of the week. Well one of them anyway; we've also got Takeshi Miyazawa's last issue of Spider-Man Loves Mary Jane (mini-review: good as always. The love triangle (rectangle?) is set up plausibly, without making anyone look bad. Great art; I hope David Hahn will be able to replace Miyazawa without looking terrible). But this issue of Runaways is the final one by the comic's creators, Brian K. Vaughan and Adrian Alphona. They end it very well, setting the story for Joss Whedon to take over (although I hear he will only do six issues. Bummer). It seems I'm not the only one who loves Molly; all the creators express their love of her in the letter page in the back of the book. Plus, she gets some of the best lines of the issue: 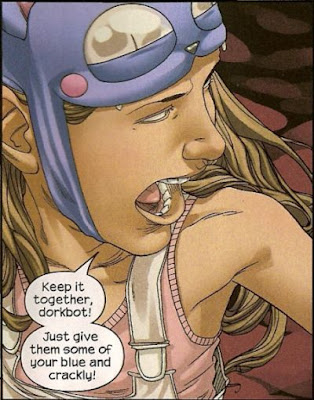 So, I'm sad to see the creative team go, but I'm glad the book will live on. They're great additions to the Marvel universe, and I hope they stick around for years to come.
----- 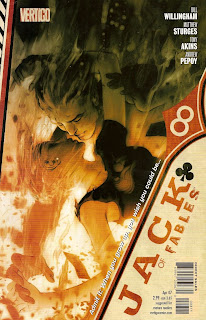 I don't really have a lot to say about this book; it's a lot of fun, as always. I will mention that I love the humorous self-centered tone of the narration, which is by Jack himself. You can see an example of it on the cover, with the text saying "Admit it: When you grow up, you wish you could be..." before the title. Inside, he fills most of the captions with self-aggrandization and acknowledgement that he's in a comic book (he even breaks the fourth wall in this issue). It's great fun. Plus, there's a good bit of nerd-baiting, as a character is introduced who is a chubby comics nerd who loves Star Wars, lives with his mom, and plays a lot of Dungeons & Dragons. Way to hit all the stereotypes, guys! I'm sure he'll be back next month, along with the wacky villainess, who seems to be the embodiment of luck (and what better place for her than Vegas?). I can't wait!
-----

I also wanted to show off a couple other things I bought but haven't had the time to read yet: 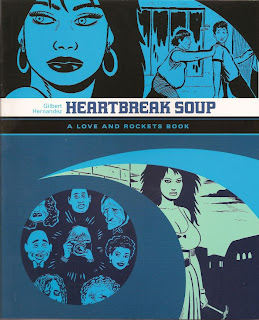 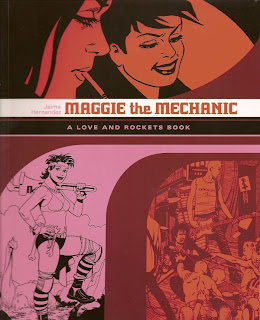 That's right, the new Love & Rockets digest editions. Actually, they seem kind of big to be called digests, but at $15 each, they're a great deal. I can't wait to read them. And I also picked up Ode to Kirihito, by Osamu Tezuka, which I'm also stoked to read. It's got a really cool cover, with a band around it that obscures half of the picture. So if you slide it to one side or the other, it's like you have two variant covers in one! 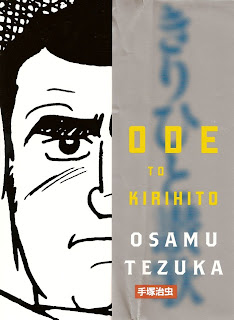 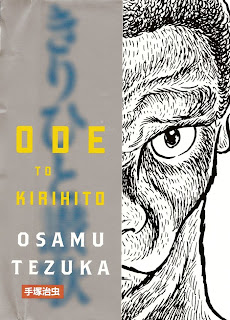 Looks like that's it for me for today. Will I be back with more content tomorrow? Who knows!
Posted by Unknown at 6:08 PM