The feminists might get mad at me for this one

I don't know why it's taken me so long to get to this, but I'm going to do it, dammit! And maybe if I'm lucky, I'll get some linkage from When Fangirls Attack. Anyway, on with the show! 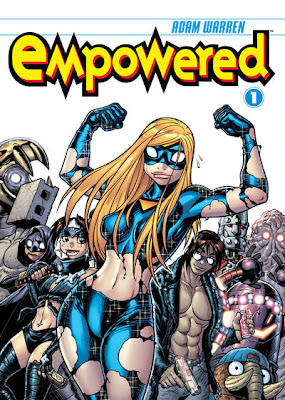 Well, Adam Warren manages once again to craft a fun, wacky story, and he fills it with incredibly energetic, expressive art. The book starts off in a light, comedic, and somewhat exploitative manner, detailing the adventures of the titular superheroine, who has a propensity to get her costume shredded to indecent scraps and end up tied up bondage-style by villains. 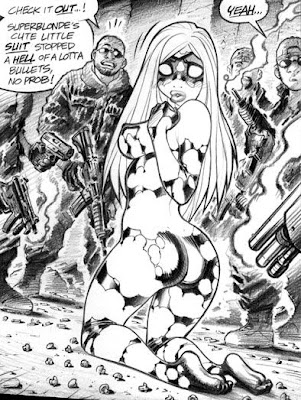 We find out later in the book, via fourth-wall-breaking chapter title pages, that the original concept for the comic came from some commissioned artwork that was hired to do of superheroines in bondage. He got bored of the drawings and started doing short comics instead, but then he got interested in the character and developed it into a graphic novel. So that explains why a good portion of the early parts of the book (which mostly consists of short, 4-8 page chapters) are goofy stories in which the main character makes a fool of herself and ends up defeated and tied up suggestively. 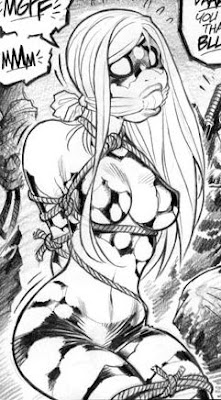 But then starts to delve into her character, finding out what makes her tick, not only in terms of powers and abilities but also mentally and emotionally. We see how she gets discouraged at being defeated so often, but pluckily picks herself up and keeps plugging away at the forces of evil. She has self-esteem issues, and she's embarrassed by how revealing her incredibly skin-tight costume is (one slight quibble here: she complains that she has trouble staying in shape, but other than possibly drawing her rear end slightly larger than normal, Warren doesn't make her look any larger than a normal superheroine. It wouldn't have hurt to add a little chunkiness to her waist; that can even be somewhat sexy, in my opinion). You really start to feel for her as she gets discouraged at her perceived lameness. 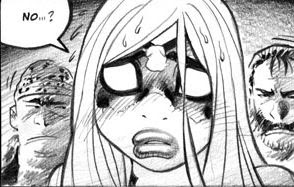 A turning point is reached when she meets a guy (ironically, a thug working for villains) who encourages her to keep trying. This might seem regressive (a man is the one that gives her the strength to go on), but I think it's actually fairly feminist: he lets her know the good things about her, like her courage and determination. He helps her see the positive qualities about herself; it's really rather sweet. There are some great scenes of the two of them thinking about each other (I love that he's the one that seems especially lovestruck), and when it's discovered by other thugs that he's helping her out, she gets to come to his rescue. Later, she also gets some female support when she makes friends with Ninjette, a martial artist who is also sick of working for villains. Ninjette is ultra-competent, so she's there to help "Emp" learn to use her abilities better. 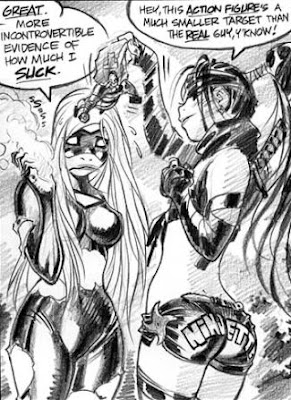 And then we get into another somewhat controversial area, which gave the book its shrink-wrap and "explicit content" sticker: sex. There are a lot of scenes of Empowered and her boyfriend having sex; it's not merely hinted at. claims that there's no nudity, but there might as well be; a few strands of hair sometimes cover nipples, but when characters are getting it on right on panel, it doesn't make much difference. But in my opinion it's well-depicted. Rather than shying away from the subject or hinting at it, puts it front and center: this young couple, who are in love and living together, are having sex with each other. No need to be coy about it. It's refreshing to see the subject dealt with in an adult manner, (mostly) refraining from juvenile humor. Warren also takes advantage of this "don't hold anything back" atmosphere to cover the little details of superhero life, such as what to do about body hair when you wear a skin-tight costume, or the surprising number of superheroes who got their powers from STD's. It seems like there's no place he won't tread, and that's a good thing. 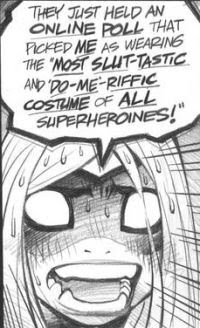 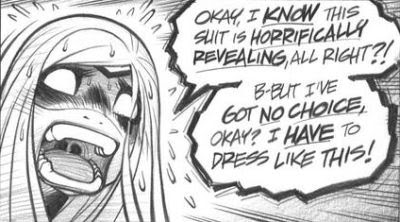 I haven't really mentioned the comedy aspects of the book, but they're really the main focus here. Pretty much everything is played for laughs, from the silly names of superheroes (Empowered's team is called the Superhomeys, and members have names like Capitan Rivet, Sistah Spooky, Major Havoc, and Glorpp/Protean) to Emp's near-constant state of disrobement. Halfway through the book, she manages to trap a villainous demon lord in a piece of alien technology, and he is left in her care. So he spends the rest of the book sitting in her apartment, watching TV, and commenting on her actions in a typical villainous tone, with lines like, "Costumed wench! Insert the "Mad About You" DVD for my viewing pleasure!" It's hilarious. 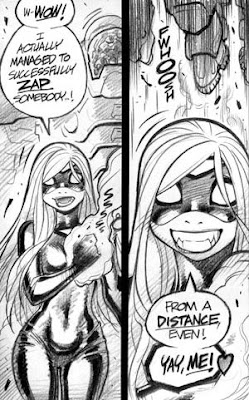 And I have to mention 's art here. He's celebrated as one of the original artists to draw in a manga style, but he's really developed that style to fit his own hyperkinetic writing brand of storytelling. I love the dynamic layouts that he puts together, and his action sequences are always great fun. I've also found that he's really good at facial expressions and body language, especially in his female characters. The range of emotions that Empowered shows in this book are all distinctive, making us feel sorry for her when she's sad and laugh when she's angry, frustrated, embarrassed, or confused. Great stuff. 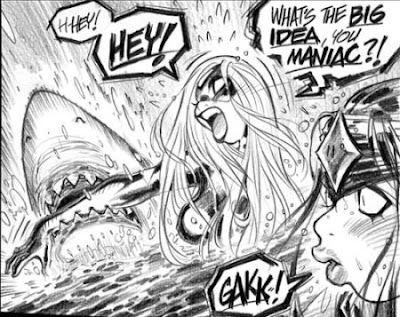 So, it's a book I definitely recommend, although I'll note that it's not for everybody. As he talked about in a recent interview with Newsarama, enjoys jumping back and forth across the line separating titillation/fanservice and the satirization thereof. He definitely enjoys drawing sexy women in various states of undress, but he's also making fun of people that like that sort of thing, and, by extension, himself. But under the surface of the silly jokes, sexy chicks, and superhero comedy is a good story about a girl developing the confidence to do something she loves. If you're so inclined, check it out.

P.S. I thought I would mention that in his journal post on the day Empowered was released, Warren talked about his plans for future volumes of the series (volume 2 should come out in October!) and stated that "If if Empowered fails, then I’m extremely unlikely to ever bother drawing another comic again." Not that you should buy this if you won't like it, but it's something to keep in mind if you're an Adam Warren fan. If you can't find a copy, here's a link to Amazon.