Here's some quick reviews of comics that came out last Wednesday:

The Punisher Presents: Barracuda #2 (of 5)
Written by Garth Ennis
Art by Goran Parlov 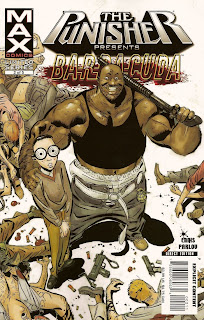 I haven't read any of Ennis's current Punisher series (although I hope to rectify that someday), but I thought this Barracuda mini would be okay to pick up. Sure enough, any background is quickly explained (The Punisher cut off Barracuda's fingers on one hand, blinded him in one eye, shot him in the chest with buckshot, and dumped him in an ocean full of sharks. But he survived.), and then on with the story. And I'm enjoying the hell out of it, as Barracuda is a great character that Ennis writes really well. He's huge and intimidating, but he keeps a goofy grin on his face, giving him a disarming look that completely freaks out anybody he's talking to. It's great fun to just see him interact with other characters, including the nerdy kid that he's been hired to "make a man of". 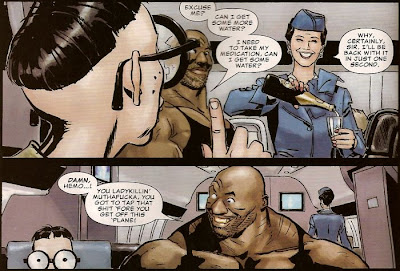 They end up in South America, and Ennis throws in some social commentary about U.S. foreign relations (a drug smuggler has a statue of Ronald Reagan, in honor of the man who helped him get rich). We also get a contrast of how the rich criminal lives compared to the common man, and an example of the kind of "electioneering" that Barracuda and his military compatriots participated in in order to get the smuggler in power. Good stuff. Ennis is great at doing comedic violence (and sex; we get some of that too) while giving it a subtle message. It's very enjoyable, and I'll be reading the rest of the series.
-----

The Spirit #4
By Darwyn Cooke 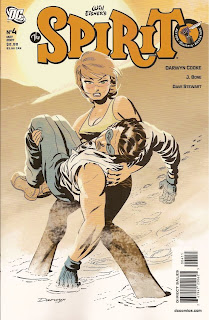 Wow, this issue was great. While I thought the last two issues were pretty good, they didn't exactly knock my socks off. But this one really wowed me. Wonderful art, and I loved the story that Cooke put together here. He introduces Silk Satin, the CIA agent who will surely end up teaming up with the Spirit again. She's an ultra-competent agent (for the most part), and we get the classic scenario in which she and the Spirit are chained together and stranded in the desert. Good times. We also see a bit of the continuing plot threads Cooke has going between the self-contained issues, as Hussein Hussein from #2 figures into the plot (and introduces us to The Octagon terrorist group let by The Octopus). 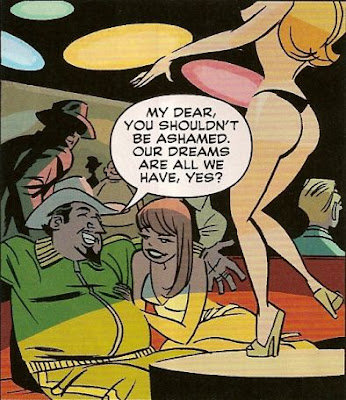 Wow, that's almost nudity. I'm surprised Cooke got away with that.

I love the way Cooke makes Satin the real hero of the book; she keeps saving the Spirit's life, and she's the one that takes down the villain in the end. And he gives us some good banter between them, as she's attracted to him but doesn't want to admit it. 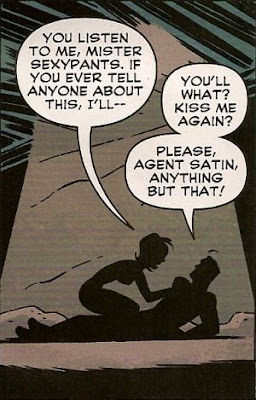 And Cooke's art is excellent, as always. He gives us some great, sand-swept views of the desert, along with the usual urban environments and exciting action scenes. 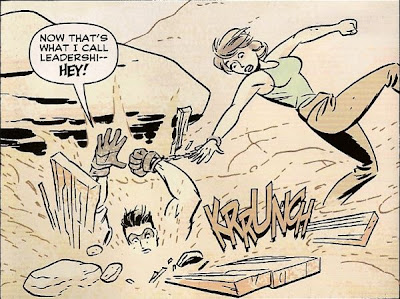 It's a very fun book, and probably my favorite issue yet. If you haven't been reading it, I recommend the upcoming collection (there's going to be one, right?).
----- 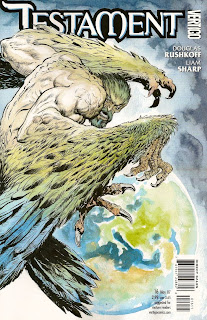 Well, it looks like this is going to be my last issue of this comic. I enjoyed it for the first year or so, but lately it's gotten more confusing with less payoff. Maybe it's the "Babel" storyline that finishes this issue, but I'm just not enjoying the book like I once was. For a while, it was an interesting interplay of near-future conspiracy with Biblical stories, but that seems to be making less sense, and the characters aren't interesting anymore. Plus, the art has gotten much, much worse. What was once clearly-defined, with well-drawn characters and interesting layouts, has become muddled and ugly. Check out this almost Liefeldian depiction of a character: 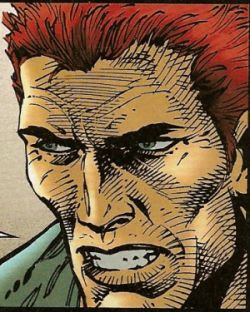 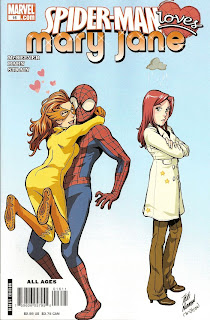 I don't actually have much to say about this one, but I think the new artist on the title is pretty good. The writing is lots of fun, as usual. But the real item of interest in this issue is David Hahn, and whether he can actually follow Takeshi Miyazawa. I'm happy to report that he seems to be filling Tak's shoes pretty well, and will probably only get better. However, I read somewhere (Miyazawa's blog?) that the series might be ending after #20, which makes me assume that will be McKeever's last issue (he recently got an exclusive contract with DC). If so, bummer. We'll see what happens. Anyway, I don't have much else to say, so here's some examples of Hahn's art: 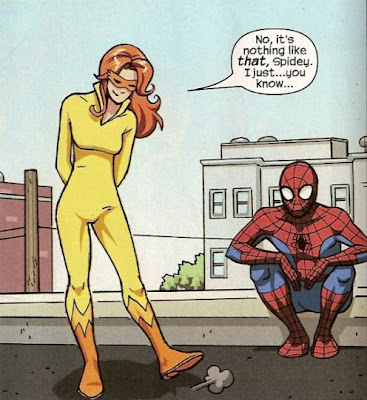 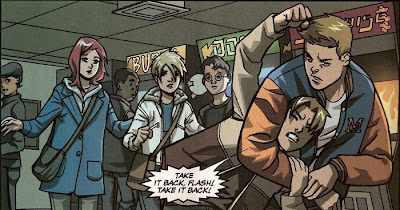 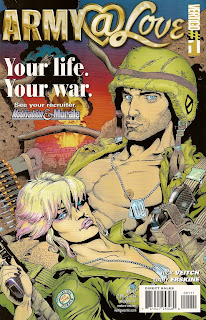 This is another one I don't have too much to say about (for now). I enjoyed it quite a bit, but that was to be expected since I dig Rick Veitch's work. I'm enjoying the satirical elements, and the artwork is very cool. I'm sure the story, setting, and characters will be developed more in future issues, so I'm happy to get this introductory look at them. Don't let me down, Veitch!

Ah, I suppose I should describe what this is about to anybody who hasn't heard of it. In the near future, the U.S. is still at war in the Middle East, in this case in a country called Afbaghistan. In order to increase morale, a secret Motivation and Morale outfit has been created that sends soldiers on retreat for sexual gratification (that means orgies). But they're keeping it secret due to the uproar that would get out if people back home found out. We also get some satirical looks at the consumerist society that has developed in the U.S. (that is, the even more consumerist society, since we're pretty big spenders already), and what technology will be used for. It's an interesting introduction, and I can't wait to see where Veitch goes next. 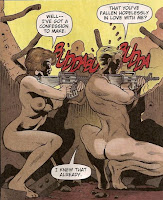 And that's all for now. I'll try to do that Empowered review later today, or tomorrow at the latest.
Posted by Unknown at 1:04 PM